Forest rights and wrongs in Sonbhadra

FOUR months pregnant Lalita Devi coiled herself to escape the blows of heavy sticks. She was bewildered why each blow was directed at her belly.

Men in khaki were ruthless till she fell unconscious. After five hours she found herself outside the Kone police station.

“I was lying in a pool of blood. My seventh child was never born,” she said. Lalita was among the 90 families demanding the right to land inside Magardaha forest and an end to corruption in logging. The families said the forest officials, along with nearby villag ers and some police officers, forcibly ev icted them from the forest in Sonbha dra district of Uttar Pradesh on March 16. They alleged the eviction was planned, though the trigger was their protest over tree felling, which they said had been going on illegally for long. The residents of Magar da ha had detained a tractor carrying logs for a week when a cro wd attacked them.

The majority of the residents belong to the Chero tribe and Scheduled Castes. They collect tendu leaves and do farming. Some have documents issued by the sub-divisional magistrate’s (SDM’s) office certifying that the land inside the forest belongs to their forefathers. The families say they shifted to the forest in 2000 from Karail, Kachnarwa and Sagersuti villages.

Land rights at the root of unrest Residents of Magardaha say they have been complaining to the forest department about illegal felling of trees for nine years. The trouble started when they began filing applications to claim the land under the Forest Rights Act (FRA) notified in 2007. The Act gives legal holding to those settled in forests before 2007. “The attitude of the department changed,” said Ram Khela wan, 85. It began instigating nearby villagers whom it employs to cut trees and to ferry quarried stone, the tribals alleged.

Forest guards in khaki and villagers razed the thatched huts, tied the hands of men behind their backs, beat them with sticks and boots and assaulted the women, they added. “They took away our cattle,” said Ram Ghulam. The tribals had about 80 cows and 100 goats.

The settlers spent the night outside the Kone police station. Officers at the police station refused to file an FIR, they said. The government hospital at Robertsganj denied treatment to Lalita, who lost her child. “Doctors demanded a copy of the FIR and refused to treat her,” said Ram Ghulam. Most tribals have taken shelter in Karail village.

Budhinarayan Toppo, a member of the state-level committee that monitors implementation of the Act, said the attitude of the forest department appeared dictatorial; it does not want to give land rights to forest dwellers. Toppo has had several meetings with the district and forest officials. “Once land is allotted the department will have to increase surveillance to check encroachment. Most crucial, the tribals will not allow illegal felling of trees. This will hamper officials’ illegal income,” said Budhinarayan.

DFO Chaurasia blamed a few activists for instigating tribals to encro ach on forestland to exploit the Act. He gave a new twist to the clash by claiming it was a result of a rift between the settlement in Magardaha and Satdwari village. Residents of Satdwari accept they helped the tribals and dalits settle in the forest, but maintain a silence on when.

Inderdev Yadav and Magru of Satdwari said the villagers had harmonious relations with the settlers, but the tribals insulted a sage in the village and that led to violence and eviction.

Satdwari residents’ version of the evicti on puzzled the fact-finding team that visited Sonbhadra after the violence. The team was organized by the Delhi Solida rity Group, a coalition of activists, on the request of the Kaimur Kshetra Mah ila Mazdoor Kisan Sangharsh Samiti (KKMMKSS) that has been mobilizing tribals and dalits in the region to reclaim forest rights. “When we asked the villagers why forest officials did not come to end the violence, a van daroga (a forest department employee) emerged from the crowd to give an explanation. We understood what was happening,” said Surendra Nischal, the head of the department of sociology at JV Jain College in Saharanpur.

Social groups and non-profits active in the region are making conflicting claims. Bindu Singh, regional vice-president of the Uttar Pradesh Grameen Khetihar Majdoor Union, claimed the residents of Magardaha were encroachers who were given false hope of acquiring land by a few groups. It resulted in violence because people in the area protested illegal settlement, she said.

Roma Mallick, campaign coordinator of the National Forum of Forest People, opposed the claim, saying the tribals settled in Magardaha in 2000. She demanded an independent inquiry into the violence. “Why are they shying away from inquiry?” asked Mallick, also associated with KKMMKSS. “The forest department created the rift between tribals of Magardaha and people in nearby villages. It is in no mood to part with land.”

FRA: not easy to implement

On paper the role of the forest department in implementing the Act might be restricted, but in reality it is powerful.

Under the Act, a 15-member Forest Rights Committee (FRC) is set up in every village. FRCs forward the applications claiming land rights to the committee at the SDM level. In the SDM committee, the forest department is just a member. The committees and land approval are under the jurisdiction of the welfare department. Toppo alleged land verification— though the duty of the administration— is done by forest guards. “Guards apparently have orders to give minimum possible land to tribals,” he alleged.

In Sonbhadra the administration is relying heavily on the forest department for verification. Villagers know it is the forest guards who are responsible for a number of letters issued by SDMs refusing or reducing the land claimed. Of the 64,671 applications received by the SDMs in Sonbhadra district till May end, nearly 87 per cent (55,980) were rejected.

Only 9,725 applicants got land rights; several over an area much less than applied for. In Katuandhi village half the tribal population is angry, said members of the state-level monitoring committee. Take the case of Raj Bali, who said he owns three hectares (ha).

His application was processed by the committees but the forest department rejected it. Kaushlaya said the department has reduced her land from nearly two ha to a 20th part of a hectare. “A forest guard came to inspect the land. He submitted false information to the SDM,” said the mother of four children who lost her husband three years ago. 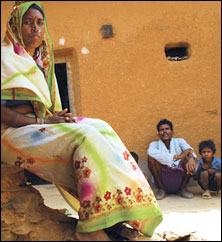 FRC members say random allotment of land is an attempt to divide the tribals and turn them against FRCs. “There are two options in front of me. I should either quit the post or face the triba ls’ ire,” said Dharmendra, an FRC member and pradhan of Kata undhi. “The FRC is toothless. The administration has given all powers to the forest department and there are no criteria for allotment of land.”

Forest officials alleged FRCs take money to allot the land or increase the measurement. A senior forest official also blamed social organizations and NGOs for impeding the implementation of the act. One cannot blindly trust the applications filled by FRCs, he said. “We have rejected applications after physical verification,” Chaurasia added. In case forest dwellers do not have documents, the department establishes claims by looking for signs like bunds, wells, grazing and burial ground that show people have been living at a particular place for years.

GPS: half a solution