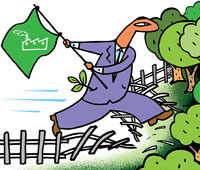 THE Union environment and forests ministry is approving use of forestland for industrial and other infrastructure projects in violation of its own executive orders and provisions of the Forests Rights Act (FRA) of 2006.

Scrutiny of project clearance processes undertaken by forest rights groups indicates the no rms are violated more often than followed.

“The rate of clearing forestland diversion has accelerated in recent years, with 70 per cent of such clearances being granted in the past eight years,” said Ashish Kothari of the Pune non-profit Kalpvriksh. He said the ministry’s forest advisory committee has cleared 70 to 80 per cent of the proposals it received without ascertaining if the rights of forest people have been settled as per FRA.

The Act says no forestland can be diverted for non-forest uses without settling land rights and taking consent of each affected gram sabha. A ministry circular, issued by senior assistant inspector general of forests C D Singh on July 30, 2009, to states and union territories, clarified they would have to furnish evidence of all processes being completed. The evidence includes records of public consultations held, letters from each gram sabha saying all processes under the FRA have been completed and letters of consent from each gram sabha.

The most glaring instance of the ministry ignoring people’s rights is the clearance it gave to the POSCO steel plant in Jagatsinghpur district of Orissa (see ‘Police clears way for POSCO‘, Down To Earth, June 1-15, 2010). Shankar Gopalakrishnan, secretary of Campaign for Survival and Dignity, a federation of forest rights activists, said the clearances the ministry gave prior to its 2009 circular also violated the law.

“The ministry talks as if the requirements (proofs) originated in the July 2009 circular, but these provisions exist in the FRA,” he said. In Madhya Pradesh and Chhattis garh alone, 15,600 hectare of forestland has been diverted for nonforest uses since 2006 when FRA was enacted, he added. The activists said the ministry has not responded to their letters pointing out these violations.