The Mattewara project envisions the construction of an industrial park and textile units at the location, which is termed by some to be the largest forest in Punjab 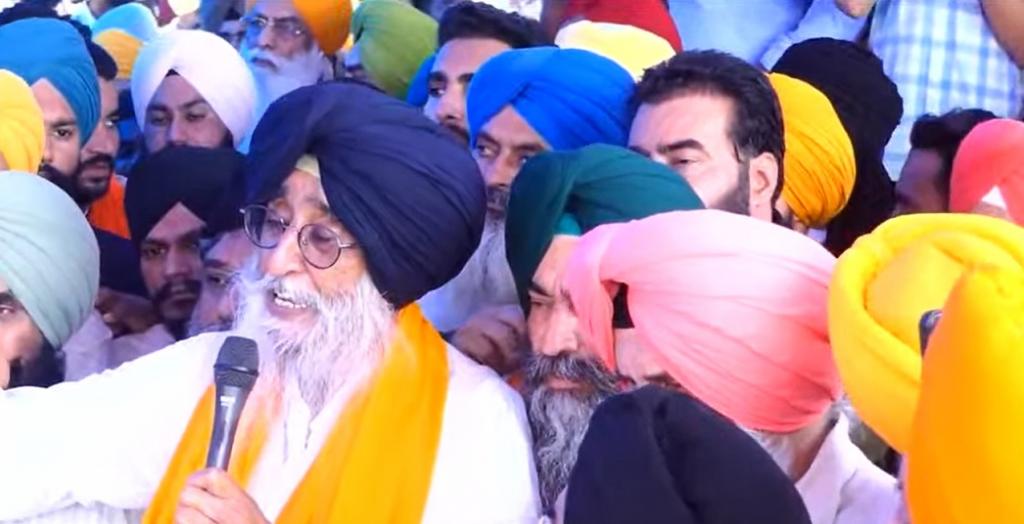 Simranjit Singh Mann, MP from Sangrur in Punjab, address the crowd at the Mattewara Morcha protest in Ludhiana

The Punjab government’s proposal to set up an industrial park in the historic Mattewara forest along the Sutlej river near Ludhiana has raised the hackles of both politicians and the people of the state.

Public Action Committee, a Ludhiana-based non-profit, organised a protest against the project July 10, 2022, at the local gurdwara near the Dhussi Bund on the Sutlej in Ludhiana district. The area is close to the Sekhowal village, the land of which will be used in the project. The non-profit also streamed the event live on YouTube.

Read Mattewara: Why Punjab needs this ancient forest near its largest city and river

The previous Congress government in the state under Captain Amarinder Singh had approved setting up an industrial park on 955.67 acres near Mattewara forest and the Sutlej in July 2020.

The opposition Aam Aadmi Party (AAP) had then called the project, ‘ill-conceived’, with present Chief Minister Bhagwant Mann saying the government was not concerned about the environment.

But after coming to power in the state elections this year, AAP did a volte face although they later clarified that the project would not be set up on forest land. Rather, it would come up on land acquired in Sekhowal, Mattewar, Salempur, Garhiyan, Cell Kalan and Kalewal villages, in addition to the land of the animal husbandry and rehabilitation departments.

“That is a half-truth and half-truths are more dangerous than lies,” Jaskirat Singh, who works with Public Action Committee, told the BBC’s Punjabi service.

Read Moving beyond organics: Understanding the place and space of brown cotton

Maninderjit Singh, a local farmer, told the BBC that the textile and fashion industries were some of the most polluting globally.

Hardev Arshi, from the Communist Party of India, addressed the crowd and claimed that the land in nearby Sekhowal village had been acquired from the village sarpanch by force.

An opinion piece published last week in Down To Earth had said the entire land of Sekhowal village has been acquired for the project except 100 acres meant for houses and fodder.

“The people of the village have no livelihood other than farming. No one knows whether the government has any plans for the employment of these people,” the piece had noted.

The project will come up in the vicinity of the Sutlej and its floodplain. The issue of river waters has always been a thorny one in Punjab.

The state’s leaders, during much of its history after independence, have claimed that the Centre unjustly awarded waters from its rivers to states such as Haryana and Rajasthan, in violation of riparian principles.

Read Punjab Assembly Elections 2022: The rivers that gave Punjab its name, are dying; But is anybody paying attention

The state’s river and ground water are also highly polluted. According to the Punjab Pollution Control Board, 18 cities situated on the banks of the Sutlej and its tributaries are polluting its water.

The Budha Nalla in Ludhiana city, which was once a tributary of the Sutlej, is now so polluted that when its water enters the river, the Sutlej water becomes ‘E’ grade.

Political leaders also visited the protest and spoke to the crowds assembled at the spot.

“The water of the Sutlej is already so polluted that the Malwa region (in southern Punjab) has become a cancer belt,” Simranjit Singh Mann, the head of the Shiromani Akali Dal (Amritsar), said.

Mann, a proponent of a separate Sikh homeland called Khalistan, had won the by-poll for the Sangrur Lok Sabha constituency last month. The seat had been vacated by Bhagwant Mann when he became Punjab chief minister this year.

“This Morcha (agitation) will be so strong that the Centre and Punjab government will have to run with their tail between their legs,” Mann said to cheers from the crowd.

Another prominent politician, Sukhpal Singh Khaira, said Punjab had already given billions of cubic metres of water to a non-riparian state like Rajasthan in the past 20 years through the Rajasthan Feeder Canal.

“Our ground water has been sucked dry to grow paddy. Punjabis across the world must fight to have this project shelved,” he said.

Punjab’s best-known environmentalist, Sant Balbir Singh Seechewal of the Nirmala sect of Sikhism, was however absent from the protest. Seechewal is known for cleaning the Kali Bein, a stream near Sultanpur Lodhi town considered holy in Sikhism.

“I have some work at Goindwal near Amritsar and hence could not attend,” Seechewal told Down To Earth on the phone. “My stance on forests is well-known. I support their protection,” he added.

“This issue concerns the lives and livelihoods of the people of the state. I see it getting as big as the farmers’ protests in Delhi. It will become a focal point for people who will seek to join it in large numbers,” Ronki Ram, Shaheed Bhagat Singh Chair Professor of Political Science at Panjab University, Chandigarh, told Down To Earth.