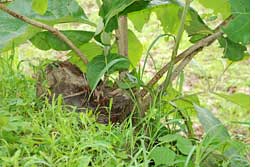 at least 600 "naturally grown" teak trees were felled and taken away by contractors on the basis of no-objection certificates (nocs) issued by the tehsildar and naib tehsildars in Manpur tehsil in Rajnandgaon district of Chhattisgarh in the past two years. These officials are not authorized to give permission for felling of trees on revenue land.

Teak being a nationalized item can be sold only to the government, said R K Sharma, principal chief conservator of forests, Chhattisgarh.

None of the villagers had ever approached the tehsildar for felling trees on their land. Instead, timber contractors secured nocs and told the villagers that they have the permission for felling trees. They paid villagers Rs 2,000 to Rs 3,000 per tree. According to a forest official, the market value of a teak tree is between Rs 1.5 lakh and Rs 2 lakh. Between September 2006 and March 2008, 127 nocs were issued for felling 600 trees. But according to R S Toppo, sub-divisional officer, revenue, Mohla, more trees were felled than certificates issued for. In one case 17 trees were felled against the noc for five trees. This is the "most alarming thing", said Toppo in his report to the collector in July, and wondered how the forest department had issued transport permission for such a large number of trees without verifying whether the noc was given in accordance with the law.

Sharma admitted this was a serious case if the department did not purchase the timber. "If it is happening, I must look into it," he said. Revenue and forest minister Brijmohan Agrawal said the tahsildar/naib tehsildars were not authorized to give permission for felling trees on revenue land. Revenue divisional commissioner in Raipur, B L Agrawal, said he was looking into the matter.

Toppo mentioned in his report that the tehsil officials had argued that the noc had been given in reference to a circular (no F8-31/revenue/2003) issued by the state government on July 24, 2003. Toppo said the provisions of the circular allowed the tehsildar/additional tehsildars to issue noc for felling trees on the condition that they should ensure that the applicant fulfilled the criteria set under Sections 240 and 241 of the Chhattisgarh Land Revenue Code, 1959. As per these sections an noc can be issued only for felling of trees grown on commercial plantation.

Asked about action being taken by the district administration, Rajnandgaon Collector Sanjay Garg said he had asked his deputy to look into the matter.