Combination of both may prove to be disastrous for the state in the long run, say experts

West Bengal has the highest death rate from the novel coronavirus disease (COVID-19) along with the least testing in India. The combination of the two may prove to be disastrous for the state in the long run, noted several public health experts.

West Bengal carried out about 100 tests per million — the lowest among major states and territories. Among those, 5.8 per cent tested positive to the SARS-CoV-2 virus, behind Delhi, Gujarat and Maharashtra, according to data (until April 25) accessed by Down To Earth, from the Union Health Ministry and states.

Data for Telangana was not available.

The state had a 10 per cent death rate — 57 deaths out of 571 infected — which is three times that of the national death rate and almost double from Punjab (5.5 per cent). The state government, however, officially pegged the figure at 18, excluding those COVID-19 patients who died from comorbidities.

One of the questions raised was on the manner of declaring the deaths of those who died from the disease, with Rajiva Sinha, the state’s chief secretary, admitting there were 57 deaths related to COVID-19 till April 24.

Sinha, however, claimed that comorbidities — cardiac problems, respiratory ailments or diabetes — were responsible for 39 of the deaths, which is why they were kept out of a death list that is released by a government-appointed committee in the state.

The committee was specifically set up to audit, ascertain and attribute the exact reason of death of any patient who suffered from COVID-19.

The state earlier refrained from quoting the number of COVID-19 patients dying from comorbidities. Two more deaths were declared by West Bengal on April 27. 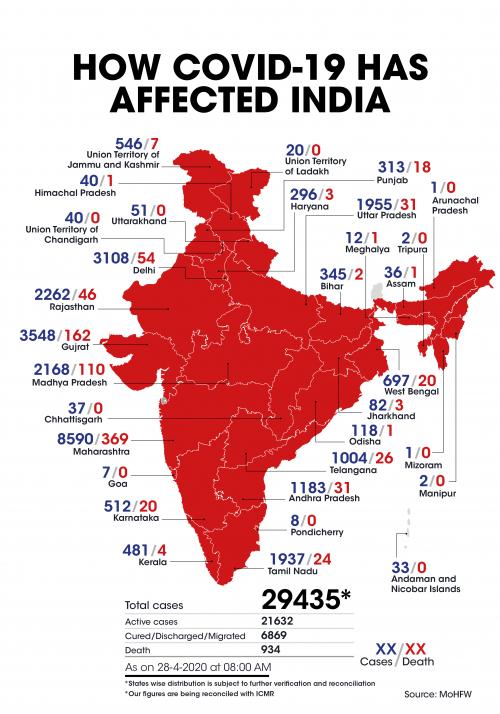 “We said all along that a lot more people were dying than the official figures showed,” Dilip Ghosh, the Bharatiya Janata Party state chief, told DTE.

Congress Member of Parliament (MP) Pradip Bhattacharya alleged the committee — that has only been set up in West Bengal — is meant to suppress the actual number of deaths.

All the people who died with comorbidities should be classified under COVID-19 deaths, according to the World Health Organization and the Indian Council of Medical Research (ICMR), said Arup Haldar, a physician and public health analyst.

“The deaths may be caused either due to direct or indirect impact of viral infection. This excludes accidental deaths,” he said, referring to a recently published study in Italy that showed an overwhelming 99.2 per cent deaths from COVID-19 can be linked to comorbidities.

Another senior public health expert — associated with the state administration — pointed out that West Bengal had the lowest number of tests being carried out and also had the highest positivity rate among all states.

“The combination of these two statistics along with the high death rate of COVID-19 patients makes the state quite vulnerable,” said the official on the condition of anonymity.

The states that had high testing rates, low positivity rates and low death rates were the best placed to counter the pandemic, the official added.

A group of non-resident physicians from West Bengal — health scientists and healthcare providers — complained about “gross under-testing (and) misreporting of data on the cause of death in COVID-19 patients”, in a letter to Chief Minister Mamata Banerjee.

“While we have concerns about inadequate testing across India, we find the situation in West Bengal particularly grave,” said the letter, signed by the experts, who work in several universities and institutes in the United States.

The number of those who were truly affected depended on the extent of testing, the accuracy of test results and in particular, the frequency and scale of testing of asymptomatic cases that may have been exposed, the letter said.

“We have strong reasons to believe that that the current number of cases reported in West Bengal is a gross underestimate,” it said, adding a warning that the state could suffer “dangerous consequences”, unless proper mechanisms were followed.

“The West Bengal government has always followed ICMR guidelines,” claimed Santanu Sen, a doctor and an MP of the ruling Trinamool Congress.

He said the responsibility of less testing was with the Centre.

Neither were an adequate number of kits provided, nor were necessary clearances given for establishing more testing centres, Sen added.

“A large portion of kits were found faulty,” he said, pointing out that the state now conducted 1,000 tests per day.

The ICMR, on April 27, asked the state to return all its rapid testing kits as they were found faulty.

The state began conducting tests early February, with only 543 tests being carried out till March end, despite the ICMR widening their testing criteria to include testing for asymptomatic individuals at around the same time.

There were only 250 to 300 tests carried out per day across the state, until the call for more testing spurred more tests to be conducted at around mid-April

The state conducted 55 per cent of its overall testing between April 21 and April 27.