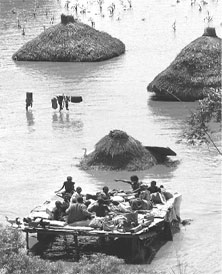 Aid workers have warned of an impending humanitarian crisis in the flood-affected areas of Mozambique. After weeks of flooding from torrential rain that killed 67 people and displaced 21,000, the cyclone Eline lashed the country on February 22 making matters worse.

According to Marielise Berg-Sonne, a Red Cross official, as many as 80,000 people are at the risk from flood-related diseases like malaria and cholera. But, so far, the government is yet to get reliable figures of the displaced or the dead. Many areas are submerged and are only accessible by air.

Mozambique remains one of the poorest countries in the world despite the economic growth picking up after 15 years of civil war. "Some people are saying that we are back to the same situation we were in after the war," says Berg-Sonne. Most of the 19 million people of the country still remain below the poverty line and have no access to even the most basic of services. The floods have made their situation worse as standing crops have been completely destroyed.