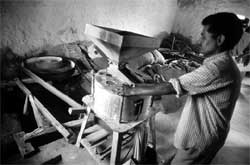 the owners of some 70,000 traditional watermills ( gharat in local parlance) in Uttaranchal have finally been empowered. The state government has granted small-scale industry status to gharat , fulfilling a long-standing demand. Significantly, watermills -- traditionally used for husking and milling -- double up as a device to tap hydropower by employing the most elementary technology.

The fledgling state is the first in India to have taken such an initiative and promptly followed it up by declaring a watermills policy. The local residents can consequently secure bank loans to upgrade their gharat for producing electricity. The watermill owners' associations can also be converted into cooperatives for better electricity management. "It is a giant leap forward and will roll down an energy revolution in the Himalayas," says Bhagat Singh Koshiyari, chief minister of Uttaranchal, who is said to have evinced a keen interest in the project.

There are half-a-million watermills in India's 10 Himalayan states with a potential of generating 10,000 mw of power. Of this, a measly 210 mw is being harnessed currently. But Anil Joshi of the Himalayan Environmental Studies and Conservation Organisation (hesco), a Dehradun-based non-governmental organisation (ngo) working on upgradation of gharat , is optimistic. "This is the first major step towards decentralisation of power generation in India," he says.

About 3000 villages in Uttaranchal are still in the dark -- literally. With power through the conventional grid route eluding this region and the state government unable to electrify it, ostensibly due to its empty coffers, watermills have brightened the otherwise bleak prospects of the local residents.

The gharat is the bread and butter of those residing in the remote villages of the region. Though it has been around for hundreds of years, its electricity generation potential has only been exploited in recent times. The Uttaranchal government's decision will enable residents to generate electricity and sell it to local users at a price fixed by them. In fact, the Himachal Pradesh government is also mulling conversion of watermills into micro-hydel projects.

Ironically, even as the authorities in India have been sitting on the proposed renewable energy policy, its neighbour Nepal has taken rapid strides in rural electrification by using these mills. "It is hoped that the Uttaranchal government's decision will compel the Union government to speed up the finalisation of its policy," says Joshi.