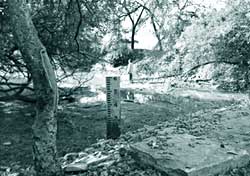 the Keoladeo National Park in Rajasthan is facing an unprecedented shortage of water. Though the rainfall in the region was normal last year, the usual flow to India's most famous wetland -- with its unique ecology that draws migratory birds from distant corners of the globe, as also bird watchers -- has been interrupted by an irrigation project. As a stopgap arrangement, tubewells are drawing groundwater to fill small areas of the park.

The state government is under pressure to release water to the park. But it can't take on farmers who are not willing to part with their irrigation. The matter has now reached the Central Empowered Committee (cec) that advises the Supreme Court in the mammoth forest case called Godavarman vs Union of India. cec members visited the park to collect ground information on March 1-2, and their recommendation to the court is eagerly awaited.

The wetland is a natural reservoir of excess water from Karauli district via the Gambhir river (see map) in July. (Water usually stays till the end of March.) The river comes up to Sewla, 18 km from the park. From here, the Pichuna canal carries it to Ajan bund, 1 km from the park. In villages of the Gambhir's flood-plain, its water reduces soil salinity.

In 1979, the state government decided to build the Panchana dam at Karauli to prevent flooding in Bharatpur and irrigate Karauli villages. Work completed in 1986, but cofferdams were weak and broke each monsoon, allowing water to flow unhindered to the park.

This changed in 2003, when metal sluices were installed. In 2004 rains came and the Panchana reservoir filled for the first time. Only some excess water was released. Rajasthan's chief wildlife warden, Arun Sen, asked for more water for the park. On September 6, Rajasthan chief minister Vasundhara Raje ordered release at night. About 15,000 people from 70 villages in the dam's command area got together, saying they would kill themselves if water was released. They claimed the water was for irrigation only; there was no agreement to provide water to the park. "We were waiting eagerly for irrigation water after years of drought," says Atar Singh Gurjar of the Panchana Pani Bachao Sangharsh Samiti, a body formed to prevent the water's release.

The matter turned political. Raje had to roll back her order. The park received a mere 18 million cubic feet (mcf) in 2004, against a required 550 mcf. K C A Arun Prasad, park director, says dryland grasses and the invasive tree Prosopis juliflora are slowly taking over the land, marking changes in the wetland's ecology. The season for migratory birds saw their numbers dwindle. Even the species structure changed and birds requiring drier conditions were seen in 2004. Harsh Vardhan, honorary general secretary of the Tourism and Wildlife Society of India in Jaipur, petitioned the cec in December, seeking its intervention. The storage capacity of the Panchana dam is around 2,100 mcf and in 2004, the dam had 1,410 mcf -- insufficient to irrigate the command area. Vardhan's affidavit to the cec says the lack of water doesn't justify stopping water at Panchana as the dam was originally supposed to be smaller. That the dam's height was increased from the sanctioned 13.7 metres to 25.9 metres because of the vested interest of a former irrigation engineer. Politicians have wielded their influence to increase the command area of the dam, he complains.

Raghu Raj Singh, a prominent hotelier who comes from the erstwhile royal family of Bharatpur, says the absence of a provision for water for the park in the Panchana project is a bureaucratic mistake now being used for politics. Batti Lal Meena, member of the legislative assembly on a Bharatiya Janata Party ticket from Karauli, is playing a double game. At Panchana, he openly assured the villagers that he would secure them water, the Supreme Court notwithstanding. When Down To Earth asked him where he stood, he said the court's ruling would be paramount.

Karauli villages say if released for the park, the water would actually benefit the farmers of Bharatpur. "Politicians there are using the bird lovers as a front to get water," says Raj Bahadur Meena, who leads the agitating farmers. He complains cec members did not meet farmers at Panchana, meeting only the communities at Bharatpur. "If the court rules against us, we will fight them. Since the dam came up, this is the first time we've got water," says Maan Data Singh, a leader of the agitating farmers.

Dhirendra Devarshi, zoologist with the M S J College in Bharatpur and a bird watcher, corroborates this fear: "In 2001 and 2003, the farmers of Bharatpur refused to release water to the park." They prefer the water staying on the fields till September to reduce soil salinity. Ram Prasad, sarpanch of Agahpur village near the Ajan bund, says water should go to the park only after passing through their fields. This water is useless as it does not reach the right areas of the park, retorts a forest guard.


As there is no formal arrangement to release of water to the park, government officials are inclined to meet the irrigation commitments around Karauli district, especially given the law and order situation. There was a suggestion to feed the park 310 mcf per year up to the year 2010 through the Chambal-Dholpur-Bharatpur drinking water project. Thereafter, a dedicated pipeline could be laid, reducing the requirement from the drinking water project to 62.5 mcf. The pipeline's cost estimate: Rs 100 crore. The per-litre cost of the water thus transported is yet to be estimated.

Forest officials and wildlife enthusiasts oppose this, saying piped water would be biologically dead -- devoid of any algae, protozoa, plankton or fish. While river water brings in about 37 fish varieties, only six types can breed in the park. Moreover, storing water in the park would change it from a wetland to a lake. "There is enough scientific evidence to show that water should come from Panchana dam," says Harendra Singh Bargali of the freshwater and wetlands conservation programme of Worldwide Fund for Nature - India.

At the public meeting in Bharatpur, cec members assured the park would get water from the Gambhir. To ensure that water is available in surplus at Panchana, it is suggested that Chambal water be taken there. "The irrigation department has assured us they would provide the water for the park and efforts are being made to reduce the seepage on its way down," reiterates A C Chaubey, chief conservator of forest in Jaipur. But Shyam Singh, honorary warden of the park, fears that all these suggestions would be used to delay the decision on the water issue in Karauli and Bharatpur.