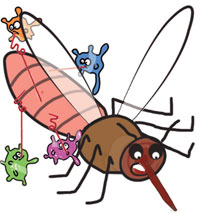 FROM sophisticated insecticides to genetic modification, scientists have tried every possible mechanism to eliminate menacing mosquitoes. But the measures only raised environmental concerns and resulted in sturdier mosquitoes. Scientists are, therefore, working hard to find out more biological control agents to combat the disease-spreading vector. The latest to join the arsenal are bacteria.

Scientists of the Vector Control Research Centre (VCRC) of the Indian Council of Medical Research in Puduchery have recently isolated a bacterium from mangrove forests, which they say can thwart the spread of vector-borne diseases like malaria, filariasis, dengue and chikungunya. They have also discovered the mechanism through which the bacteria kill the larvae and pupae of mosquitoes.

Previous studies have shown that mangrove forests harbour microorganisms that can kill mosquitoes. Last year, scientists in Tamil Nadu had found that the bacteria present in the soil and sediments of Muthupet mangrove are capable of combating malaria-spreading Anopheles mosquito. Taking their cue, VCRC researchers analysed microorganisms present in the soil of Andaman mangroves.

They collected soil samples from the creeks of Kalighat in North Andaman, separated bacterial cells from the soil samples and named them VCRC B483. They exposed the larvae and pupae of filariasis-spreading Culex quinquefasciatus, malaria-spreading Anopheles stephensi, and Aedes aegypti, which spreads dengue, chikungunya and yellow fever, to the bacteria. The bacteria secreted a lipopeptide, a biochemical, which killed the pupae and larvae of all the three mosquitoes. To identify the bacteria, the researchers carried out biochemical analysis and gene sequencing. It was Bacillus amyloliquefaciens.

“This is the first report on the mosquitocidal activity of B amyloliquefaciens,” says lead researcher A M Manonmani from the Unit of Microbiology and Immunology at VCRC. The study was published in the December 2011 issue of Acta Tropica.