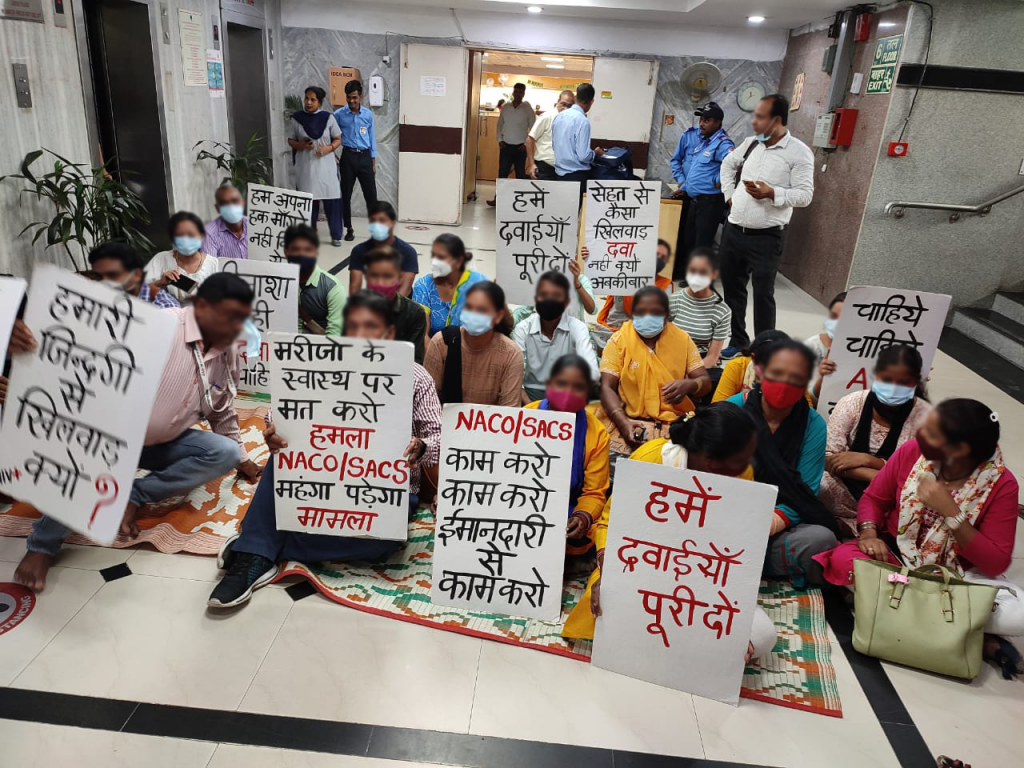 A group of people affected by the human immunodeficiency virus (HIV) have been protesting an alleged shortage of life-saving drugs at the National AIDS Control Organisation (NACO) office in the national capital since July 21, 2022. Around 40 patients carried placards and claimed antiretroviral therapy (ART) drugs have been in irregular supply since last November.

ART is a combination of HIV medications that patients must take every day. Acquired immunodeficiency syndrome (AIDS) is a chronic, potentially life-threatening condition caused by HIV.

NACO, a central government health agency, is responsible for providing free medicines, diagnostic kits and other essentials for those in need.

Some 2.31 million people in India are living with HIV, stated NACO data from 2020.

Around 1.45 million HIV patients are currently receiving free treatment from the body under the Union government-funded National AIDS Control Programme (NACP). There are 680 ART centres across the country.

However, the past few months have been difficult for some patients. They claim that their ART centres are not able to provide sufficient medication.

“We always get the medical supplies for at least one to two months. Sometimes the ART centres where we are registered even give us three months’ supply,” said Manoj Pardeshi, associated with the National Coalition of People Living with HIV (NCPI+) in India.

However, for the last few months, the patients have received only a week or even just five days’ medication at a go, he told Down To Earth. Pardeshi is also a member of a technical research group that advises NACO.

Intermittent treatment is a huge hurdle for a lot of HIV-positive patients that NCPI+ supports as they are daily wage labourers, he said.

“Labourers need to skip work more often to queue outside the ART centres as only a few days’ medicines are available at a time,” Pardesh added.

The supply problem has found its way across India, the NCPI+ network has found.

Dolutegravir — a World Health Organization-recommended HIV treatment — is either out of stock or in short supply in Assam, Haryana, Himachal Pradesh, Jharkhand and Bihar.

There’s a shortage of paediatrics antiretroviral therapy in Manipur and Uttar Pradesh.

NACO’s deputy director general, Anoop Kumar Puri, issued a letter on May 30 recommending states switch to an alternative regimen for HIV patients to “tide through the crisis as an interim arrangement.”

A report published July 25 by news agency Press Trust of India cited official sources and stated there is adequate stock of antiretroviral drugs for 95 per cent of people living with HIV in India.

“There is no reported stock out for any antiretroviral (ARV) drugs at the state level and fresh supply orders for procurement of the next lot of several drugs are already placed. Individual antiretroviral therapy (ART) centres may have this issue at times, but the medicines are immediately relocated from nearby centres,” the report noted.

DTE reached out to NACO via email but did not receive a response till the time of publishing.

This disruption in supply has severely impacted treatment. While some patients can buy the medicines from their pocket, not everyone can afford them.

“Some people have dropped their treatment, some are doing it irregularly while others are being forced to change their medication,” Hari Shankar Singh, an HIV-positive patient and a member of the Delhi Network of Positive People (DNP Plus), told DTE.

Patients are getting treatment according to the availability of medicine, not their health, Singh said.

Drugs like these, if taken at the right time, allow people like Singh to lead a normal life.

They reduce viral load to a point where the immune system is restored, halting disease progression. Here, timing is critical.

As per NACO: “Adherence to ART regimen is vital in this treatment. Any irregularity in following the prescribed regimen can lead to resistance to HIV drugs, weakening or negating its effect.”