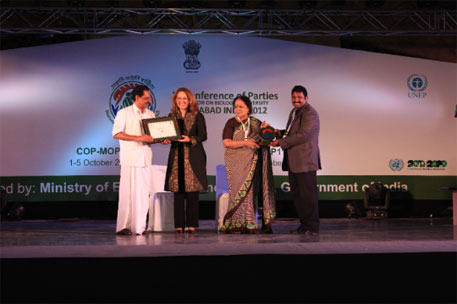 Recognising the models of biodiversity governance for the first time, the Union Ministry of Environment and Forests, in collaboration with Government of India and United Nations Development Program (UNDP), has awarded six pioneers in the field with India Biodiversity Awards 2012. Â´â•—â”

The awards were given at a ministerial reception by minister of state for environment and forests Jayanthi Natarajan and United Nations undersecretary general Rebeca Grynspan on October 17. The award carries a cash prize of Rs 1 lakh and a citation and was given to institutions based in India that are engaged in the nominated biodiversity management activities for at least five years.

The Indian biodiversity awards received 150 nominations from across the country; a six-member jury headed by scientist M S Swaminathan shortlisted 15 contestants through a desk review. The desk review was followed by on-site visits to assess individual models based on parameters like effectiveness of biodiversity conservation, benefits to local communities and institutional sustainability. The other jury members were Amita Baviskar (sociologist from Delhi University), National Biodiversity Authority chairperson Balakrishna Pisupati, former director of Wildlife Institute of India Vishwas B Sawarkar and J S Singh of Banaras Hindu University and Kailash C Malhotra (an anthropologist), both fellows of Indian National Science Academy and Indian Academy of Sciences.

The awardees shared their experience in conservation with media persons on October 18. Vinayak Bagade of Shakarpur village gram panchayat said decentralisation of local self-governance bodies and biodiversity management committees was the key to their success. “We used around Rs 1 crore from Mahatma Gandhi National Rural Employment Guarantee Act for forest conservation and we are demanding additional 1,500 hectares now for afforestation.”

Another award winner Kirtan Kumar from Rajasthan said that the efforts in reviving forests around villages have not only helped people find a source of living but that they have also developed a feeling of ownership over the forests which is helpful in both conserving forests and protecting wildlife.

“The winners of the India Biodiversity Awards represent innovative approaches that combine the basic needs of livelihoods, wellbeing and dignity while respecting biodiversity conservation and the earth’s limits. India has evolved a range of biodiversity governance models that demonstrated the importance of biodiversity strategies that create positive opportunities for development,” said Grynspan.

Natarajan said that conserving biodiversity and harnessing it on a sustainable basis is critical for realising development goals. “Biodiversity governance in India needs to enable this on a sustained and equitable basis,” she added. The minister also announced that the India Biodiversity Awards will now be an annual feature to mark International Biodiversity Day on May 22 each year.