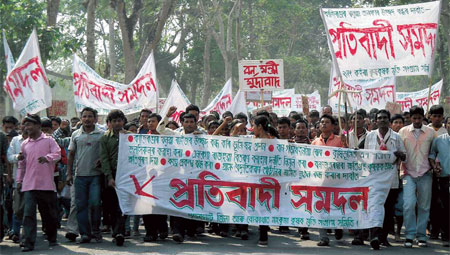 PEOPLE on the fringes of Kaziranga National Park are anxious. They fear eviction. On January 9, the Assam gover nment issued eviction notices to 10 families in the Kohora range of the park. Others in 16 villages, marked for park extension, fear it could be their turn next.

Residents of the villages marched in protest to the Golaghat district office on February 14 demanding their right to land. “We will leave our land and go if they request us. We love the animals in the park. But the government should consultand tell us where to go from here,” said Paniram Saikia, a resident of Borbill village. The day Kohora residents received eviction notices they showed Jiten Gogoi, their MLA for 10 years, out of their area.

In 1980s, the park authorities had proposed extension in the south till the Karbi Anglong hills. This became necessary because every monsoon floods submerge large tracts of the park, forcing animals to migrate to the hills of the Anglong district. According to S P Singh, chief conservator of forests (CCF), poaching mostly happens during this time. The extension was proposed in six parts, of which one part is complete and two are under implementation.

Approval is awaited for the rest. Non-profits estimate extension will affect 20,000 people, most of them doing farming. Park director Surojit Dutta, however, said the proposed additions “do not include too many villages”.

Forest officials also say that 80 per cent of the people in the area are encroachers and recent settlers. The opposition could have been avoided had the eviction carried out earlier, Dutta added.

“We had given the funds for relocation under first, second and fifth extension in 1996 to the state revenue department. The delayed eviction has led to the recent opposition,” he said.

The population of the villages includes Mishing, Karbi and other Scheduled Tribes. Around 80 per cent of the people are tribal and have claims under the Forest Rights Act (FRA), 2006. The Act states that the rights of people living in Critical Wildlife Habitats can be affected only if it is proved that their presence is causing irreversible damage to wildlife and their coexistence is not possible. But the Assam government did not undertake any study.

“The state government has not settled the claims under FRA. It will have to begin a scientific study and prove that the people and the wildlife in Kaziranga cannot coexist before it proceeds with extension,” said Arupjyoti Saikia, member of the Saxena Committee set up to review implementation of FRA. The government till date maintained that these were revenue villages. After the protest it has assured the people that it would look into their claims under FRA.

The tiger reserve tag for the park best owed in 2006 has aggravated tension. People dependant on tourism fear losing business with stricter guidelines in place. Kaziranga Jeep Safari Association, resorts and hotel owners association and 19 other commercial groups took to the streets on February 7 and 14, demanding scrapping of the tiger reserve status. Forest officials say the status will not affect business; instead bring more funds and tourists. A national park is entitled to receive funds from the state. A tiger reserve status brings Central funding. “There will be avenues for creating new posts for better upkeep of Kaziranga,” said Singh.

Resorts and hotels, 50 private and a few government ones, have mushroomed in the vicinity of Kaziranga. There are 140 gypsies and 18 privately owned elephants that take tourists on safaris during the peak season. Small restaurants and shops are also opening up.