All static water bodies like ponds and lakes—rain-fed or groundwater-fed—need to be lined with fine clay or bentonite after dredging. Otherwise, water would start seeping into the underground aquifer.

The clay lining on the bed of the lake acts as a valve. It stops seepage but allows underground water to come up when the water table rises. It is, therefore, wrong to say that dredging removes or dries up the water in the lake. Dredging only removes stones, gravel muck, silt and soil from the lakebed. The water is left undisturbed.

Concretising the run-off paths in the catchment is technically wrong. Run-off seepage only raises the water table, thus reducing the difference of level between the lake water and static water of the aquifer below. The catchment area should be embellished with vegetation to stop soil erosion, which otherwise would fill the water body with soil. 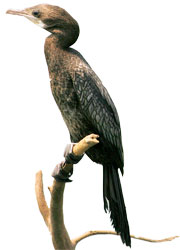 This is with reference to your report regarding the project to kill cormorants in Kollam, Kerala ('Shoot at sight order for cormorants', October 1-15, 2009). It seems as a result of a legal notice served by the nonprofits People for Animal and Paryavaran Mitra, the Bombay Humanitarian League (a trust) and objections raised by NGOs, the state government has withdrawn the project.

The fisheries and forest departments and panchayats in the district wanted to kill these water birds just because they are eating the shrimps. Cormorants are protected under Entry No 15, Schedule 4 of the Wildlife Protection Act 1972. Cormorants also come under the category of migratory birds and India is a signatory to the International Convention of Migratory Species, 1979.

According to Warblers and Waders, a conservation group in Kerala, there are 10,000 birds and not 70,000 as projected by government departments and businessmen. The fishery department has no jurisdiction to frame such a scheme. 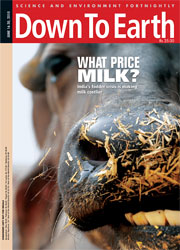 One reason for scarcity of animal fodder and its impact on the cost of milk production is the increased demand for nutritious fodder created by the government- sponsored genetic upgrade programme and the growing demand for milk ('Strained milk', June 16-30, 2010). All the departments under the Ministry of Agriculture are working to improve fodder availability in the country.

Free supply of fodder crop seeds has been increased substantially since last year. To encourage farmers to grow fodder crops for seed, a buy back arrangement has been incorporated in the scheme. The department of animal husbandry, dairying and fisheries has also launched a Centrally sponsored fodder and feed development scheme to promote technology interventions. The budget for the fodder development scheme was also increased this year.

The rise in sea level and the sea eating into land may be seen along the entire coastline of India, perhaps in different measure in different places ('In the ocean's way', July 16-31, 2010). The coasts face other problems too. Reports say the beach at Tadgam in Valsad district in south Gujarat is thick with a stinking toxic sludge. The toxic waste from the Gujarat Industrial Development Corporation's industrial estate in Sarigam town is pouring there through a 13.34 km pipe. This is affecting the livelihood of the fishing villages nearby. The entire coast should be studied comprehensively and appropriate remedial action taken. 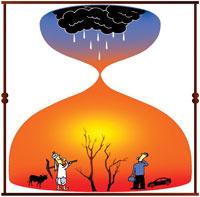 Man has known the importance of water for ages and therefore used it judiciously ('What monsoon means', July 16-31, 2010). Not anymore. Take the case of surface water discharged into the Arabian Sea by the west-flowing rivers like the Chaliar, Periyar and the Pamba in Kerala. These rivers discharge 27,613 million cubic metres of fresh water into the sea. This water can be contained at the catchment sites through small check dams, which do not damage the ecosystem, and diverted to the rain shadow regions of the Western Ghats.

Indigenous technology is available in the country but there is no willingness to make use of it. Since independence, we have been talking of decentralised planning systems but have not made much headway. We have tried out appropriate technologies, yet it has failed to make a dent in the socio-economic development of the country.

Rainwater collected should be stored either in huge containers or underground sumps. But the storage capacity is limited. The water collected is not potable unless treated. Understand the limitations of rainwater harvesting. It would be better if the surface water seeps into the soil and charges the springs.

Enough soil needs to be left exposed for rainwater to seep in. Storm water drains should lead directly to nearby water bodies so that these serve as aqua-chargers for springs underneath.

Fakes are for real

The rich nation v poor nation approach in the article 'The irrelevance of multilateralism' (July 16-31, 2010) could have been avoided. China, India and Brazil are hardly poor countries. The established economies are looking to protect their businesses as these three would.

Be it the safety and efficacy of medicines or sustainable agricultural production, valid technical arguments get overshadowed by trade and economy. For some years I was involved in controlling the value, quality and safety of products shipped to African and Latin American countries and can tell you there are some serious lapses. I remember an Indian manufacturer registered the brand name Panadol (which was not protected there) and started selling the tablets in the export markets. These were not generics but were sold as a brand to fool customers. The packaging and label designs were a straight copy of the original. I tested its product several times and the quality fell short of the original Panadol standards.

Many similar products I tested had unlicensed and dangerous ingredients. There is a need for fair control on both sides.

Let's talk about it

The article 'Rags to pads' (July 16-31, 2010) was heartening and insightful. Discussing menstrual hygiene has been a taboo in India for cultural and religious reasons. A good attempt to address a not-much-talked-about issue.


From sewer to river

River Paon Dhoi in Saharanpur district of Uttar Pradesh is sacred like the Ganga. But thanks to urbanisation, today the river is nothing more than a sewer line carrying the waste of the city. The Paon Dhoi Bachao Samiti, constituted and registered under the chairpersonship of District Magistrate Alok Kumar, took the initiative to clean the river through peoples' participation. It took about two months to clean the river and approximately 5,600 trucks of garbage, mud, sludge and silt were cleared. To maintain the glory of the river, the residents on both sides of the river have formed samitis to keep a close eye on the polluters and inform the administration about them.

It is time to replicate this model of local administration and peoples' participation to clean national rivers.