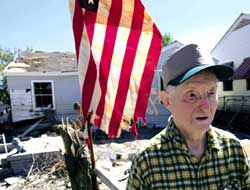 Natural disasters, mostly weather-related catastrophes, have cost the world the largest-ever financial losses of around us $200 billion in 2005.

In 2004, this loss was us $145 billion and around us $60 billion in 2003. These losses were highlighted in a report presented by Munich Re, a leading re-insurance company, at the United Nations conference on Climate Change in Montreal.

Re puts insured losses running into more than US $70 billion. This year's figures, partly due to the high number of hurricanes and storms, are part of a climbing trend being linked with climate change due to human-made emissions.

With the increase in frequency and costs of weather-related global natural disasters, climate change has become an important factor for the finance sector affecting, its insurance, banking and investment activities.

The economic cost of natural catastrophes has risen seven times and insured losses by 16 times since the 1960s, Re calculates. The Association of British Insurers report that the costs only from windstorm related damage will rise to an average of US $27 billion annually by 2080.