Cyclone Yaas gathers speed, set for early landfall on May 26

Cyclone Yaas likely to make landfall on the east coast between Balasore in Odissa and Digha in West Bengal, from where it is expected to move towards Jharkhand 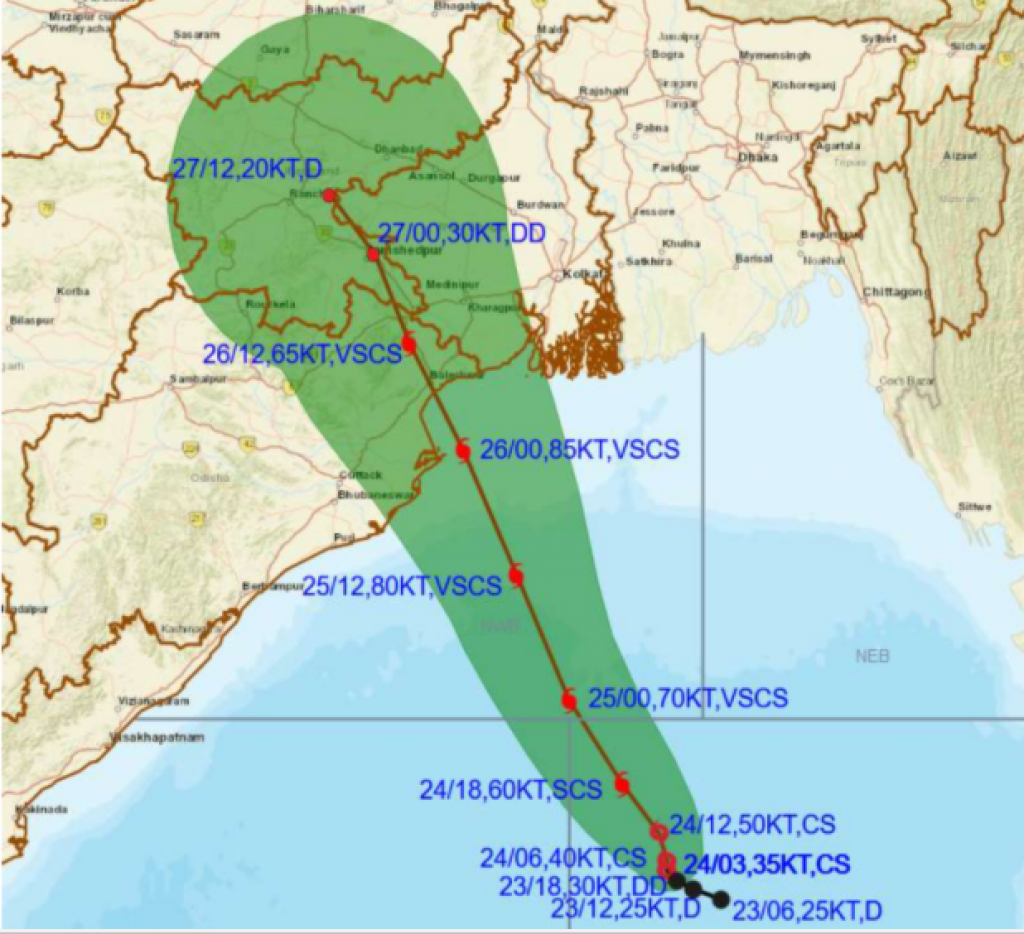 Cyclone Yaas, now expected to be a very severe cyclonic storm, is likely to break the pattern of its recent predecessors and head towards Jharkhand.

After landfall between Balasore in Odisha and Digha in West Bengal, it is expected to move northwest, towards Jamshedpur.

Cyclones Amphan, Bulbul and Fani, in the last couple of years, all wreaked havoc in Odisha and Bengal.

The cyclone may gather a wind speed of 155-165 kilometres, with a gusting of 185 km during landfall. It is, however, likely to lose strength over May 26 evening and night and turn into a cyclonic storm on the morning of May 27, and to a mere depression by the evening of May 27.

The India Meteorological Department expects wind speed of up to 155-165 kilometres per hour during Cyclone Yaas, gusting up to 185 kmph.

“We are prepared for the cyclone and are taking all measures possible. We have also considered the novel coronavirus disease (COVID-19) situation in the state,” said Javed Ahmed Khan, minister for disaster management, West Bengal.

Impact same as Amphan, damage may be less

The latest intimation of IMD, at 9.49 am May 24, suggested that Cyclone Yaas is likely to hit the West Bengal-Odissa coast earlier than expected.

According to the latest bulletin of IMD:

However its earlier bulletin released May 23 evening stated that the landfall would happen “by the evening of May 26”.

While IMD maintains that the landfall would happen between Paradip in Odissa and Sagar Island in West Bengal, its senior experts confirmed to DTE that the likely landfall point would be around Balasore and Digha.

“The cyclone is likely to move towards Jamshedpur after impacting western districts in Bengal such as Purba and Paschim Midnapore, Bankura, etc,” stated GK Das, head of IMD Kolkata.

KG Ramesh, former director general of IMD, cautioned that the exact situation would be clearer once the cyclone comes within 500 kilometres of the IMD radars stationed in the region.

The expert pointed out that in terms of the wind speed, Cyclone Yaas would be as powerful as Cyclone Amphan, but may cause less damage as it is likely to traverse comparatively less dense areas.

Sunderbans, which had to face the brunt of most major cyclones that originated in the area in recent times, is likely to face less damage as the cyclone would move beside its western fringe of Sagar Island.

Cyclones Aila, Bulbul and Amphan devastated the Sunderbans; Cyclone Fani too caused significant damage to it in certain pockets.

“Even if the cyclone passes without directly impacting the Sunderbans, we would still need to be careful, especially considering whether the cyclone coincides with high tide time,” explained Baankim Hazra, Sunderbans minister and legislator, Sagar.

“Kolkata is likely to experience a wind speed of around 60-70 km per hour. The impact should not be as high as it was during Cyclone Aila or Amphan,” said an IMD official.

“We are 10 times more prepared for Cylone Yaas than we were for Cyclone Amphan,” said Debasish Kumar, a Trinamool Congress legislator.