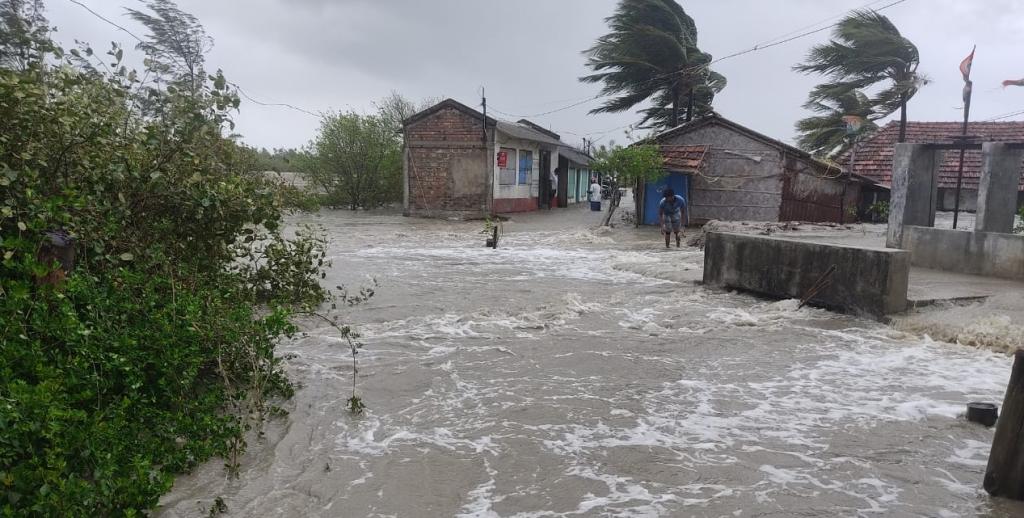 West Bengal’s South 24 Parganas district, within which the larger share of the Sundarbans is located, is impacted by cyclones the most frequently among Indian districts, found a recent study.

The return period of cyclonic storms in the district was 1.67 years on a scale of 1.5 to 60 years, according to the analysis by India Meteorological Department (IMD), Pune. Shorter return periods indicate more frequent cyclones.

For severe storms, the return period was 2.61 years, the report Climate hazards and vulnerability atlas of India showed.

In 2021, the Sunderbans saw two (Yaas and Jawad cyclones) out of the 10 cyclonic disturbances that swept the country.

The researchers studied cyclonic storms passing within 50 nautical miles (about 90 kilometres) of the coastal districts from 1961-2020. Coastal districts of Kendrapara in Orissa, Nellore in Andhra Pradesh, Purba Medinipur in Bengal are also extremely vulnerable to cyclones, the team found.

Read more: Storm surges and relief: Why India should rethink its cyclone response

Kendrapara has a return period of 1.94 years and Nellore as well as East Medinipur have 2 years each.

Baleshwar district in Orissa and Villupuram in Tamil Nadu followed South 24 Paraganas in terms of severe cyclones, with a return period of 2.86 years and 3 years respectively.

“This study clearly indicates that Sunderbans within the coastal area of South 24 Paraganas is one of the most-affected parts of the country,” scientist Pulak Guhathakurta, head of the climate division in IMD Pune, told this reporter.

The unique analysis of cyclone return and vulnerability was modelled on the United States National Oceanic and Atmospheric Administration (NOAA) technical memorandum regarding the national hurricane risk analysis, Guhathakurta said.

“The finding is in sync with the developments during the last three years when Sunderbans was impacted by one major cyclone after another — from Bulbul in 2019, Amphan in 2020, Yaas and Jawad in 2021. In 2009, Cyclone Aila had devastated the region,” said Javed Ahmed Khan, state disaster management minister of West Bengal.

The region in south Bengal was ravaged by nine severe cyclones during the period, the highest in the country. Srikakulam and Ganjam districts followed with six and five intense cyclonic storms respectively.

“What stands out is that around 70 per cent of the cyclones were of severe categories in the Sundarbans area,” noted an IMD expert.

A 2021 study Spatiotemporal analysis of tropical cyclone landfalls in northern Bay of Bengal, India and Bangladesh by the World Bank also underlined the increasing threat of cyclones in the Sundarbans area.

“A composite map of the northern Bay of Bengal coastline shows that, between 1877 and 2016, the highest strike intensities were concentrated in West Bengal and northern Odisha,” stated the report. “The median landfall location shifted east-ward from northern Odisha toward the West Bengal / Bangladesh border area (Sundarban),” it added.

During 1877-2016, the total cyclonic strikes in the Sundarban region varied between categories either 27 to 31 or 32 to 37 — the highest categories.

Purba Medinipur in West Bengal had the highest cyclone vulnerability in the country for cyclones of all intensities. Baleshwar in Orissa topped the list in terms of vulnerability to severe cyclonic storms.

South 24 Parganas was the second-most vulnerable to all cyclones and ranked third in terms of severe cyclonic storms.

“The web atlas is depicted using Geographic Information System (GIS) tools and provides districts maps on hazard events and vulnerability; and are prepared based on the climatological data, census data on population and housing density,” said a senior IMD expert associated with the study.

Around 25 districts in the east coast — 10 in Tamil Nadu, seven in Andhra Pradesh, six in Odisha and two in West Bengal — are vulnerable to cyclonic storms, according to the paper.