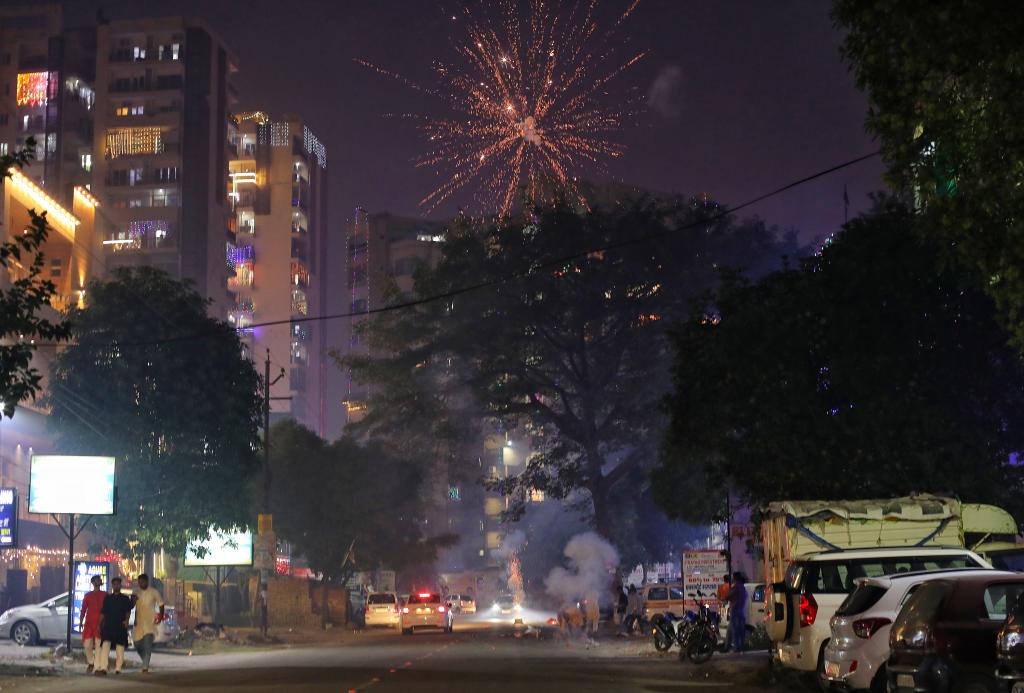 Firecrackers were burst in Delhi on Diwali 2022 despite a ban: Photo: Vikas Choudhary

The air quality in Delhi and the National Capital Region rapidly deteriorated on the night of October 24, 2022, thanks to increased stubble-burning incidents and bursting of firecrackers despite a ban in place. However, Diwali 2022 saw slightly cleaner air this time, with air quality eroding from ‘poor’ category to ‘very poor’.

Air quality in Delhi is in ‘very poor’ category and is likely to remain in the zone until October 26, 2022, according to the System of Air Quality and Weather Forecasting and Research (SAFAR), an air quality monitoring and forecasting agency.

Stubble-burning incidents in the northwest part of the country, Punjab, Haryana and Rajasthan, went up after October 21, according to SAFAR. Around 100-400 fire events in the region were reported till October 20, which went up to 1,400 fires on the night of October 23, showing satellite imagery.

The air quality in Haryana, western parts of Uttar Pradesh and some cities in Bihar was also in ‘poor’ category of the AQI at 9:10 pm on October 24, showed CPCB data.

Incidents of stubble burning may increase further, said CPCB. The wind blowing from the northwest may further affect the air quality of Delhi.

Delhi’s air quality is expected to remain between ‘very poor’ and ‘severe’ category for the next three days, said SAFAR. The share of very fine particulate matter (PM 2.5) in the capital has reached 55 per cent.

The share of pollution caused by crop residue burning can also reach 10 per cent. In this case, the air quality can get worse.

Diwali 2021, which was celebrated November 5, 2021, saw Delhi-NCR enveloped by smog. However, the late October rains this year kept the air relatively cleaner. Temperatures have also not dropped significantly, so pollutants have not been weighed down yet.

The long weekend around the festival meant several migrants went to visit their hometowns for Diwali, bringing more relief for the capital.