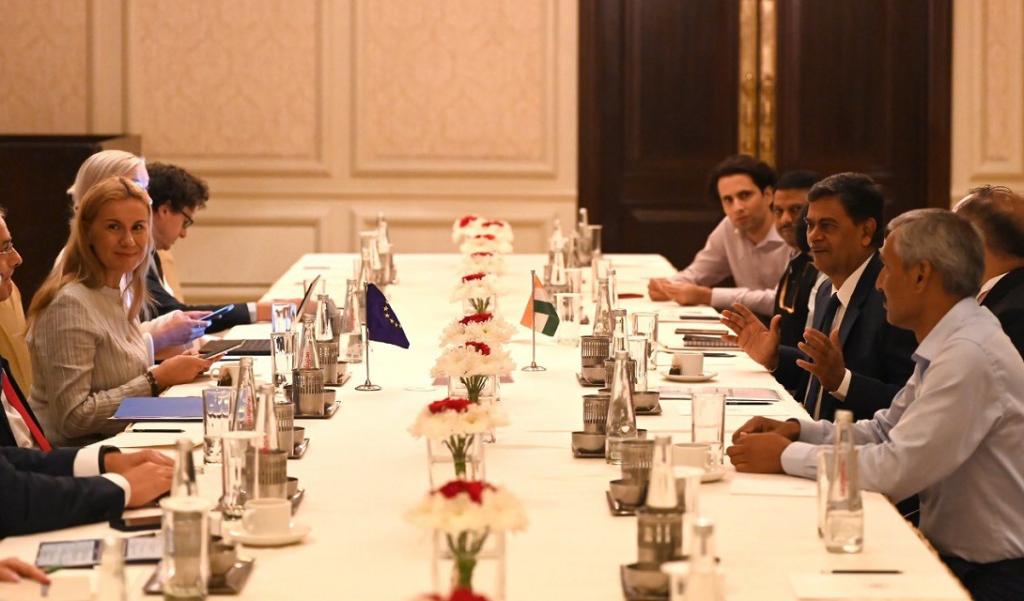 Kadri Simson, the European Commissioner for Energy and RK Singh, Union Minister of Power and New and Renewable Energy, during their meeting in New Delhi. Photo: @KadriSimson / Twitter

The time for green hydrogen has arrived in India, Union Minister of Power and New and Renewable Energy, RK Singh, said while addressing the First EU-India Green Hydrogen Forum September 8, 2022, in New Delhi.

Singh also indicated that India was in the process of setting up its own manufacturing capacity for making hydrogen electrolysers. These are devices that use renewable electricity to split water into hydrogen and oxygen. They are in limited supply globally.

“The quantity of global manufacturing capacity of electrolysers is very limited and would not be more than 4 GW,” Singh said, possibly referring to various proposals in the pipeline.

Singh added: “We are setting up bunkers at all our ports and we have signed up with my (Indian) minister of ports for giving us space to store ammonia and hydrogen for the shipping industry to use.”

“Your shipping can also use our ports for green hydrogen,” Singh said, addressing heads of organisations such as Hydrogen Europe and Hydrogen Council, representing interests of various European companies and stakeholders committed to adopting green hydrogen.

The minister invited private players with the technology in India and abroad to initiate competitive bidding processes for the manufacture of green hydrogen.

Singh said hydrogen would mostly be consumed domestically in India itself, as the demand was high. India was an economy decarbonising at a fast pace, with demand outstripping supply, particularly for electronic vehicles in the two- or three-wheelers category, he added.

“We are the most attractive market for investment for renewable energy in the world. Because of the growing economy, my (renewables) demand is increasing and that is giving space to add more renewables,” he said.

The ministry was considering experimenting with hydrogen in the cement and steel industries, he added.

This was to decarbonise these sectors that use grey hydrogen as an important raw material produced from coal. But this was very much in its nascent stages, he implied. Singh mentioned that steel giant ArcelorMittal was setting up one such facility.

He proposed adding an obligatory purchase clause in the fertilisers and refinery sectors, where the use of hydrogen is well-established.

According to the revised Green Hydrogen / Green Ammonia policy notified February 17, 2022, that will be published later this month:

Singh said hydrogen was only a part of the energy mix that also included solar, wind and nuclear power. One should not take away from the event that hydrogen is going to be a one-stop solution, he added.

Simson had said at the inauguration of the first EU-India Green Hydrogen Forum September 8:

Just over two years ago, we published our EU hydrogen strategy, the first of its kind, with a goal of 10 million tonnes of hydrogen by 2030. Last year, we enshrined our climate goals in EU law and put forward our package of decarbonising the gas sector. It covers certification, infrastructure and clears a path for a strong hydrogen sector in Europe.

She added that the bloc had a wake up call this year due to geopolitical events in the form of the Russian invasion of Ukraine.

“As a result, we ramped up our efforts on hydrogen even further. In May, we came out with our REPowerEU plan, our blueprint to become fully independent from Russian fossil fuels.

“As part of that, we aim to be at 45 per cent renewable energy in our mix by 2030. This is significantly more than our current agreed target of 32 per cent and includes an additional 10 million tonnes of renewable hydrogen, bringing our goal to 20 million by 2030,” Simson said.

She added that green hydrogen had now become an investment agenda in the EU. The bloc expected investment in the range of 320 billion to 460 billion euros, to cover all parts of the value chain, including renewable electricity production, electrolysers, storage and distribution.

Strong international cooperation must be the way forward for a number of reasons. Firstly, to develop a global hydrogen market, and then to harmonise safety and environmental standards for all, she said.

“We would like to set up a framework bilaterally with partners like India as well as multilaterally,” Simson stated conveying that the EU had a strong interest in benefiting from the development of a strong green hydrogen pipeline in India.