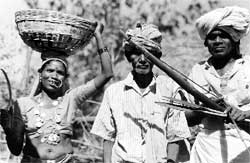 the Indian Board for Wildlife (ibwl), headed by prime minister (pm) Atal Bihari Vajpayee and predominantly comprising wildlife specialists, recently held its 21st meeting in New Delhi after an hiatus of four years. It was, therefore, not surprising that a slew of recommendations were made, including setting up of a Forest Commission and according priority sector status to wildlife. The pm also unveiled the 'National Wildlife Action Plan: 2002-2016' on the occasion.

The meeting brought to the fore a dichotomy between the pm's perceptions and clauses of the Wildlife Conservation Strategy 2002, which was adopted at the convention. Vajpayee spoke of the need to protect the interests of the poor and tribals living in and around protected areas, ensure their income generation and, correspondingly, amend laws and procedures.

Though the document also states that the affected people should be handled with sensitivity and should have access to minor forest produce, yet it adds that such activities should take place only in forests outside protected areas.

Experts feel this may burden local communities rather than provide relief to them. The stipulation that encroachments within forestland and protected areas will be removed is also a cause for concern. Ashish Kothari, coordinator, Kalpavriksh, a Pune-based non-governmental organisation (ngo), says: "This strategy statement is insensitive to the needs and rights of hundreds of communities that have, through their simple lifestyles and traditional practices, done more than any ibwl members to protect wildlife habitats." This will only encourage further politicisation of the issue, he feels.

P K Sen, former director, Project Tiger, puts a poser: "If the existing law has no provision that permits such activity, how can we suggest something different?" But he hastens to add: "So long as there is a restrictive regulation in place, there can be no increase in the human-animal conflict even if local communities are allowed into the reserve." The answer to the numerous problems faced by those living in and around protected areas, he feels, is a comprehensive land-use policy. Mahendra Vyas, an advocate of the Supreme Court and Trustee Member of the Delhi-based Legal Action for Wildlife & Environment (law-e), defends the strategy. He believes that protection of national parks and sanctuaries cannot be compromised for ecological and hydrological security.

The problem of poaching and illegal trade in wildlife also came up for discussion, with the pm mooting effective law enforcement. He laid stress on bolstering the strength of the staff engaged in conservation activities and equipping them with better facilities. The document, too, resolves to immediately fill the more than 2000 vacant posts in protected areas. This is seen as a significant step forward. "It will help wildlife managers deal with the developmental lobby," avers P R Sinha, a Central Zoo Authority official and member of the wildlife board.

However, according to Kothari, who is a member of the Wildlife Action Plan committee, the released plan was diluted and some members were not consulted when changes were made. "The section regarding safeguards against industrial and commercial threats and that of empowerment of communities was diluted," he alleges.

The strategy envisages that the task of the Forest Commission would be to look into reforming and restructuring the forest set-up and institutions within the country. It reinforces the need to promote wildlife tourism and utilise the income from it to enhance the available resources for conservation.

Vajpayee's suggestion for more regular meetings gives conservationists some cause for cheer. But Iqbal Malik, a former member of the ibwl, is apprehensive: "The prime minister may have delivered an excellent speech, but we will have to see what happens on the ground."