The lie of the land

The Bhakra Nangal project's success is rooted in myth, says a new study 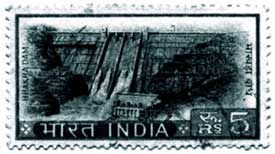 According to Sripad Dharmadhikary, one of the authors of the report, "There is no official study on the impact of Bhakra dam on irrigation, food production or on its financial, social and environmental impacts. So, we decided to do a cost-benefit analysis of the project."

Let's take the issue of food security first. Irrigation from the Bhakra Nangal project began in 1953-54. By 1963-64, the project had achieved its optimum irrigation potential. Yet throughout this period, the country continued to import foodgrains (see table: Inspite of Bhakra). According to agriculture expert, B R Shenoy, India's cereal production in 1972 was 20 per cent less than that required. The shortfall in pulses was much higher: 52.7 per cent.

In 1950-51, unified Punjab (Haryana had not been carved out of the state then) had about 6.13 per cent of India's areas under foodgrains and it produced 6.85 per cent of the country's foodgrains output. This ratio was to remain more or less constant throughout the next year 12 years or so (see graph: Constant despite Bhakra). Punjab's actual production of foodgrains in this period increased from 3.483 million tones in 1950-51 to 5.932 million tones in 1962-63. The state's area under foodgrains in this period increased from 5.96 million hectares (ha) to 7.27 million ha. So, while the area under cultivation increased 1.217 times, foodgrain production went up 1.7 times. The corresponding figures for the entire country for this period stand at 1.21 and 1.57. So, where are the benefits of the Bhakra, questions the report.

• Increasing the net sown area
Supporters of Bhakra claim that the dam played a crucial role in catering to these requirements. And they seem to be on good ground. For, we have seen that the gross sown areas in the two states did increase in the aftermath of Bhakra. But Unravelling Bhakra contests these claims. Extrapolating from records of Bhakra and Beas Management Board, the body that manages the Bhakra Nangal dam -- not a mean achievement considering this authority as well as the Punjab irrigation department keeps even the basic figures under wraps -- the authors found that the cultivable commanded area (cca) of Bhakra in Punjab is about 20 per cent of the total arable land in the state (.85 million ha out of 4.3 million ha as per 1988 figures). For Haryana, the same figure is 30 per cent (1.06 million ha out of 3.80 million ha). The two states are also served by the Jamuna Canal and the Upper Bari Doab Canal.

The authors have bolstered their arguments with other figures. The report notes, "The 'end' that any project achieves must be sustainable improvement of human welfare. Where other options offer better solutions, they should be favoured over large dams."

The Commission initiated eight independent in-depth case studies of specific large dam projects and two country studies (India and China), undertook 17 thematic studies, conducted a comprehensive global survey of 125 dams to cross-check the findings of individual studies and examined around 1,000 dams with varying degrees of intensity. This exercise led it to conclude that dams generally flooded rich and fertile agriculture land, displaced millions of people the world over and fragmented and transformed aquatic and terrestrial ecosystems with a range of effects that vary in duration, scale and degree of reversibility. The negative impacts could not balance the positive effects of dams.

The report, not surprisingly, failed to strike a positive chord among Indian policy-makers. Reviewing the study, M S Gopalakrishnan of the Central Water Commission (cwc) wrote, "The report is aimed to directly affect the developing economies of the world, particularly India and China, where dams building activities are likely to be accelerated in the next few decades to strengthenthe national economy. The developed world has almost created its storages and utilised its hydropower potential."

That's good polemics. But then do the existing storage facilities -- created by dams -- function to their optimum? According to the wcd' s India country report, the 60 major reservoirs created by large dams in the country rarely attain their optimum storage capacity. The Gobindsagar reservoir on the Bhakra did not attain its designed storage capacity for even a single year between 1983 and 1992.

Today, there are also government reports that talk of losses to the government exchequer from river valley irrigation projects. For example, wcd 's India study quotes a few cwc reports. The commission notes that losses from irrigation and multipurpose projects rose from Rs 424 crore in 1980-81 to to Rs 945 crore in 1985-86 to Rs 3,124 crore in 1993-94.

The easy equation between large dams and food security and prosperity does not not hold. But will our policy-makers pay heed to Unravelling Bhakra. That's another matter.