The past and present of rivers

Author(s): Karuna Futane We are a generation that has turned flowing fresh water rivers to rivers of sewage and garbage. We have lost rivers. But there was a time when there was a river in everybody's life. Cultures developed alongside rivers. Rivers sustained farmlands, they were home to variety of fish, they were conduits of commerce and cultural exchange. People followed waterways, from canals to great rivers, to build businesses, communities, and new lives. Rivers were revered and feared. The river was a playmate to a child to splash or joy for a woman after a hard day’s domestic toil. A river could also be the unpredictable elder who inspired awe. Flooding at many times turned a harbinger of life and prosperity into a raging torrent of large-scale destruction that destroyed human lives and ruined food crops leading to food shortages and starvation. But people learned to live with such vagaries. They learnt about the ebbs and flows of rivers. They tried to avoid places where its raging waters would strike, and congregate at those where it would be at its nurturing best. They learnt to make use of the silt left by its floodwaters and to avoid the sand which harmed their crops. But even then rivers flooded, changed courses and wrought destruction. People learnt to take that in their stride, sometimes with wit which our folklore is replete with. Over the past 150 years or so, this connection has been severed. The change happened sometime during colonial rule. Colonial water planners and water engineers introduced the idea of tapping rivers. Colonial intervention transformed seasonally inundated floodplains into sites for irrigation sites involving construction of barrages and weirs. But colonial hydrology could not come to terms with the idiosyncracies of Indian rivers. Replete with sand and sediment, most of them refused to flow between banks. Unfortunately, our planners did not take note of this failure of the colonial state when they devised plans for Indian rivers. At the same time, the people also lost the spiritual connect with rivers. Today many grow into adulthood without having seen a river in its full glory. Many of the mighty rivers have been reduced to a trickle. A lot of us still venerate rivers. In fact, the pilgrim throngs to sites associated with the big rivers, Ganga, Yamuna and Brahmaputra, seem to be growing over the years. But there is a discord between such ritual veneration and the ways we treat our rivers. Every pilgrimage adds to the trash burden on rivers. Many of our rivers have turned into veritable sewers. Some of them are toxic cesspools. Today in official documents these rivers have been renamed as drains. There cannot be a bigger loss. On International Rivers Day, we bring this collection of writings to celebrate the river. 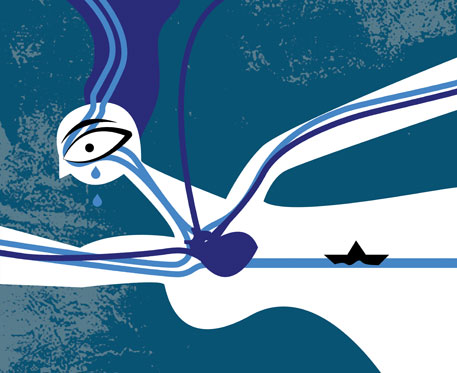 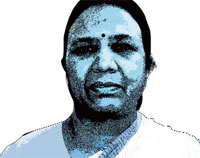 My entire childhood and young adulthood had passed in close connection with rivers, so it was like a great viraha (pain of separation) when I found that my marital home did not have a river flowing right next to it. But soon I was introduced to three small rivers flowing nearby. The Chudaman river is also known as the Khadak (boulder) river because its path lies between huge black boulders.

Compared with the big boulders, the tiny river sliding between them struck one as too small, even fragile, but its water was always crystal clear. Diving off one of the boulders into the doh (deep pool within riverbed) was a thrilling experience. A number of village children turned up there to learn swimming. Neither they nor we adults ever missed a swimming pool.

This river flowed in beautiful curves, enriching the farms along its banks. The banks were lush with greenery and its curves created many large and small natural dohs along its course, which held water during the four summer months when the river dried up. One very deep doh, aptly named Junepani (old water), was known to have water right through the summer into the monsoon when “new” water refreshed the river.

Some dohs were reserved for cattle to drink and bathe, some for women. Some of the shallow dohs were ideal for washing linen and heavy drapery like durries and blankets. On sunny days in the sharad (early winter) season following the monsoons, families would load their dirty laundry on bullock carts and go to the river. The accumulated dust of summer and the damp smells acquired through the long monsoon wash off easy in the river, and it is easier to dry these heavy pieces on the sun-warmed boulders than at home. Returning home with stacks of crisp, fresh linen also freshened up the people.

Using the river for daily washing jobs made sense. Washing at home would mean drawing up well water manually. After finishing chores, women would take a laundry basket and make a beeline for the river, trailed by small children. The river, for women, is a cleanser of dirty clothes, refresher of sore body and healer of hurt soul, all rolled in one. Pounding the clothes on stones, rinsing them in the running water, squeezing them out and drying them on the sand, all act as a catharsis against the accumulated hurts of a rough day. Can’t talk back to the mother-in-law? Give her sari a good pounding. Longing to grab that insensitive husband’s collar? Well, do it now! Utensils serve the same purpose. A mixture of sand and mud, and some force, and presto, both vessel and heart are clean!

All this done, women dive into the river. The children have been playing in the river or the sand all along. A little swimming against the strong current, a good scrub with fine river sand, unburdening with friends, and at the end of the long day of work we are again fresh, full of energy, and hungry! I often wonder how much of the unavoidable stress in women’s lives has been absorbed quietly by rivers over centuries. What role do rivers play in giving women the strength to face the odds heaped up against them? My family’s ancestral village of Shendurjana Ghat is flanked by two tiny rivers—the Jivana and the Devana. My husband has many fond memories of the deep friendship between children and these rivers. Since there were hardly any deep spots, children could play there unsupervised. Children spent their entire day, barring school hours, either near the river or in it. Elders would keep a close watch to ensure that no one defecated or otherwise dirtied the river or its bank. “Play” included important learning activities like grinding calcium-rich lime nuggets found in the river to make toothpaste. Then there was climbing on tamarind trees along the river to collect and eat tamarind, collecting gum from babool trees and using it to make kites. Climbing and swimming, skills for which parents pay a packet now, were learnt effortlessly. In the process, children also got lessons in independence, team-work and safety.

Time flew swiftly in collecting colourful shells and rocks and making architectural masterpieces out of sand, watching all the wonderful birds, fish, insects. Boredom, the bane of modern childhood, was never known to the river children. The eyes of adults who grew up beside these rivers light up when they talk about the river. Friendships were formed and forged, and life-and-death secrets shared in the witness of the river. As childhood turned into teenage, the river was around to absorb the intense pain of romantic disappointments. Its assuring touch would wash away the endless intense agitations of adolescence. There was no distress that the sight of the clean, bubbling river could not absorb. No expensive psychiatrists were needed for teen problems. The river was counsellor, loving elder and shrink.

The river was a mother and a bosom pal to women, children, farmers, cattle, birds, insects, animals, all. A visit to the river meant cleansing and freshening up, inner and outer. You went back from the river rested and healed. The only relic of that intense relationship left today is the practice of taking a dead person to the river bank for her final rest.

When I told my sons I was going to write about my relationship with the rivers, they were surprised. What is there to write? And what rivers? They are just dirty nullahs! The truth of this strikes me when I look at those rivers now. Sewage, plastic bags and pigs… What happened to all the small rivers that flowed through every village? First, deforestation has destroyed nature’s source of perennial flow. Second, with forests gone, loose silt has filled up all the life-giving dohs. Today if I dive into the doh where I used to, I will attain swift release through a smashed head.

Then there are the dams that have stopped their natural flow. The Chudaman river has eight dams proposed along its course. Two have already been constructed. At the spot where trees used to lean into the crystal clear water, there is an ugly wall and not a spot of green. The dried up bed of the river is now good only for dumping garbage.

Some 30 years back, these rivers would flow for at least eight months a year. Even when they dried up, there was enough water for cattle and daily needs. Farmers near the river would build small check-dams to irrigate their winter crops. The turmeric crop, for which this region was known, was made possible by the river. Today the flow does not last for even the four monsoon months. The self-sufficient turmeric cultivation is gone, and now farmers have to either invest in wells and borewells for irrigation, or try to earn enough political clout to get dam water.

But more than that, somewhere the connection between river and people has been lost. There is no desire left to connect with the river, to at least protect what is left, to once again build up at least a bit of the great relationship that is lost.