Unhealthy foods should be eliminated from schools, says WHO report 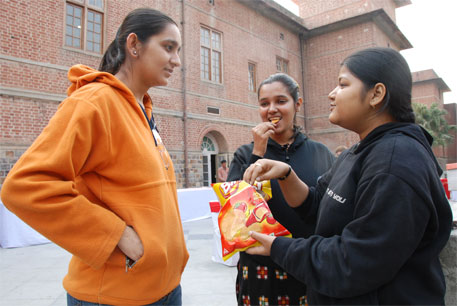 The 68th World Health Assembly (WHA) on Monday approved the interim report of the commission on ending childhood obesity, recommending the elimination of unhealthy foods from schools and asking for restrictions on promotion of such foods targeted at children.

Member delegates endorsed the recommendations of the report and shared initiatives adopted by their respective countries. The report clearly defines unhealthy foods as those which are high in saturated fats, trans-fatty acids, free sugars or salt or energy-dense, nutrient-poor foods.

Policy options recommended by the report are segregated into three strategic objectives—tackling obesogenic environment and norms; ensuring that the risk of obesity is reduced by addressing critical elements in the life-course; and treating children who are already affected by obesity to improve their current and future health.

The report also emphasises the importance of nutrition literacy through nutrition labelling and policies that enable affordable access to healthy food options. It recommends considering adoption of “zoning” around educational institutions to improve availability of healthy foods and elimination of unhealthy foods.

Childhood obesity is associated with increased risk of premature onset of non-communicable diseases such as diabetes and heart disease. Overweight children are likely to develop musculoskeletal disorders and some cancers. It is recognised as one of the biggest public health threats globally.

The number of overweight or obese infants and young children globally has increased from 31 million in 1990 to 42 million in 2013. It is estimated that if current trends continue, this number will rise to 70 million by 2025 globally.

The report highlights that childhood obesity has increased with growing urbanisation and globalisation. Children are exposed to unhealthy ultra-processed foods as they are more available and affordable while healthy food options are limited.

It also recognises that overweight children are likely to become overweight adults and obesity at early stages of life can leave a permanent imprint on individuals. The report says that childhood obesity is affected by developmental and environmental considerations and that the risk for obesity may be passed on from one generation to another.

Most delegates at the assembly referred to and endorsed one or the other part of the report. They spoke of regulatory initiatives implemented in their respective countries. Delegates of Lebanon, Bangladesh, Brazil, Malaysia and the Philippines endorsed reducing the consumption of unhealthy foods and promoting healthy food options in schools.

Brazil said that children are not mature enough to make the best food choices and, therefore, caregivers must play a greater role in guiding them. Thailand, the US, Argentina and Ecuador expressed the need for strong regulations to combat childhood obesity. Regulations such as taxes on sugary drinks and nutrition labelling to better understand the calorie content were considered highly important. The delegate from Venezuela added that they have established laws to regulate advertisements targeted at children and labelling of processed foods.

State to have bigger role and responsibility

The State has a much bigger role and responsibility as tacking childhood obesity requires multi-sectoral approach, says the report. It must go beyond the health sector and include food, agriculture, education, food trade and policies. Moreover, voluntary self-regulation mechanisms of the industry are not sufficient.

The report states that the issue is also linked with children’s right to a healthy life. Childhood obesity is different from obesity in adults. The report says, “The argument that the State need not act because obesity may be the result of individual lifestyle choices cannot apply to childhood obesity. Addressing childhood obesity must be seen as independent from considerations of political philosophy.”

It adds that countries need to adopt policy options to make healthy foods available. Trade agreements and subsidies that make access to healthy food affordable for all, especially the vulnerable and marginalised populations in low- and middle-income countries, are some of its recommendations.

As of today, there is no canteen policy to eliminate the sale of ultra-processed junk food in schools and surrounding areas. Delhi-based non-profit Centre for Science and Environment (CSE) demands that such foods should not be available in and around schools. It says food categorisation should be adopted in canteen policies to promote nutritious, wholesome and healthy food at schools.

India does not have any State-backed policy and framework to regulate food advertisements and promotion targeted at children. Voluntary pledges of select companies are inadequate to address the issue, says CSE. There is no check on advertising as celebrities continue to endorse and influence food habits of children.

India also does not have mandatory regulations for nutrition facts labelling and front-of-pack labelling. Limited consumer awareness also fails to compel self-regulation and disclosure of information.

CSE says India should continue to recognise junk foods or ultra-processed foods as unhealthy. A recent report by National Institute of Nutrition (NIN) and Ministry of Food Processing Industries has refrained from calling junk foods unhealthy. But apart from international organisations such as the United Nations and WHO, even the Indian National Dietary Guidelines of 2011 by NIN clearly established linkages between unhealthy foods and junk foods.