Uttarakhand’s ghost village: Where nobody returned despite COVID-19 lockdown

Baluni village in Pauri district was in the limelight around two-and-a-half years ago, when Shyama Prasad — its last resident — also left

The nationwide lockdown to curb the spread of the novel coronavirus disease (COVID-19), however, sparked a reverse migration, with nearly 300,000 people coming back home to their villages in Uttarakhand.

The residents of one of these ‘ghost villages’ — Baluni in Kaljikhal block of Pauri district — however, did not return.

Baluni was in the limelight around two-and-a-half years ago, when Shyama Prasad — the village’s last resident — also left. The population of the village was 32, according to the 2011 census. These villagers, however, left one by one, until Prasad was the last one to leave on January 2018.

Prasad, around 66 years old at the time, stayed behind because he had a farm there. Poor health, however, forced him to move to Kotdwar, considered to be the gateway to Pauri Garhwal and the eighth-largest city in Uttarakhand.

After the lockdown, Down to Earth attempted to find out more about Baluni village. 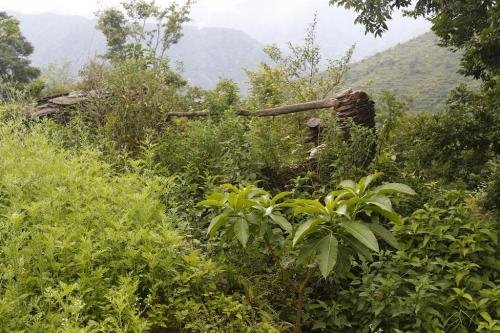 Shrubs have surrounded the homes of the village’s former residents. Photo: Srikant Chaudhary

The road to reach Baluni, around 70 kilometres away from Kotdwar, was intact. Bushes, however, grew on the road itself. It was not easy to reach the village on foot as it was around three km away from the main road.

About a dozen houses in the village were deserted. Most were broken. Locks in some homes suggested there was movement in the village until a few years ago.

The growth of the shrubs that surrounded courtyards in several homes, however, suggested that even if someone left the city and stayed here, it would have taken at least two days to remove these shrubs.

Journalist Ganesh Kala, who reported the news of Prasad leaving the village, said a road that reached the village was completed on the final days that Prasad spent in the village. Kala — on being asked the reason for people leaving the village — said some wanted a better life, while some people wanted basic facilities like education and health.

A special event for the former residents, however, was that they performed a religious programme for two to three days in June every year to stay connected to their village. A community building and a temple was built in the village for this purpose. An elderly resident from a nearby village said people from Baluni gathered at the temple every June and stayed in the community building next to it.

There is a fair-like atmosphere in the village for three days, after which people leave. This time, however, the people were not able to come back due to the lockdown.

Translated from Hindi by Sifatkaur Sahni.