US shipping out 'spoils' of terror 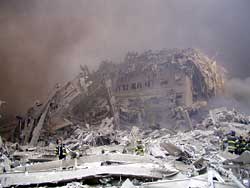 The World Trade Center (WTC) may not be resurrected in New York but the pieces are being picked up by India and China. Steel from the wreckage of the twin towers in the US is destined for a new life in the two Asian countries, where it is meant to be recycled and used in construction projects. A storm is, however, brewing in India over the potential contamination threat emanating from the consignments.

"There is no justification for such a move. If this scrap is believed to be so lucrative, why aren't the Americans recycling it themselves?" asks Bharti Chaturvedi, director, Chintan Environmental Research and Action Group, Delhi. "This is another disaster in the making. The fact that mercury levels around Ground Zero as well as in the rubble are very high is indicative of the polluting capacity of these materials," avers Chaturvedi.

Sources in India said two 33,000-tonne consignments had already reached Chennai, a third was in transit and another was scheduled to arrive in the western coast port of Kandla. The scrap was said to have been bought at $120 per tonne and would be recycled into ingots, which would be sold to various industries including the construction sector.

Ravi Agarwal of the Basel Action Network and head of non-governmental organisation Toxics Link, says: "Since India is a party to the Basel Convention, it is obligatory for the government to ask the US for contamination levels." International environmental pressure group Greenpeace points out that the onus is on the US to prove that the scrap is safe.

The Tamil Nadu and Pondicherry chapter of the People's Union for Civil Liberties (PUCL) feels that the manner in which the WTC scrap was created raises concerns about residual toxicity. "Everything, including mercury-laden tubelights, carcinogenic asbestos insulation, PVC articles and computers, was incinerated after 91,000 litres of jet fuel ignited in the buildings," says PUCL and puts a poser: "TV reports showed the US workers at Ground Zero in full body-protection gear. If they required such safeguards, don't Indian workers also need them?"

PUCL members say the US Environmental Protection Agency is moving to categorise the WTC site as a Superfund (high levels of toxic pollutants) site. "Unless there is clear-cut evidence that the steel scrap and waste are free from contamination, further off-loading should be immediately halted," they add.

Meanwhile, New York intends keeping a small part of WTC's mangled metal carcass -- for a memorial to those whose fate got twisted on September 11.