Hundreds of gharial eggs destroyed by floods in north Bihar

Two back-to-back cyclones in May, followed by early floods in June caused officials to release water into the Gandak river, thus destroying the eggs 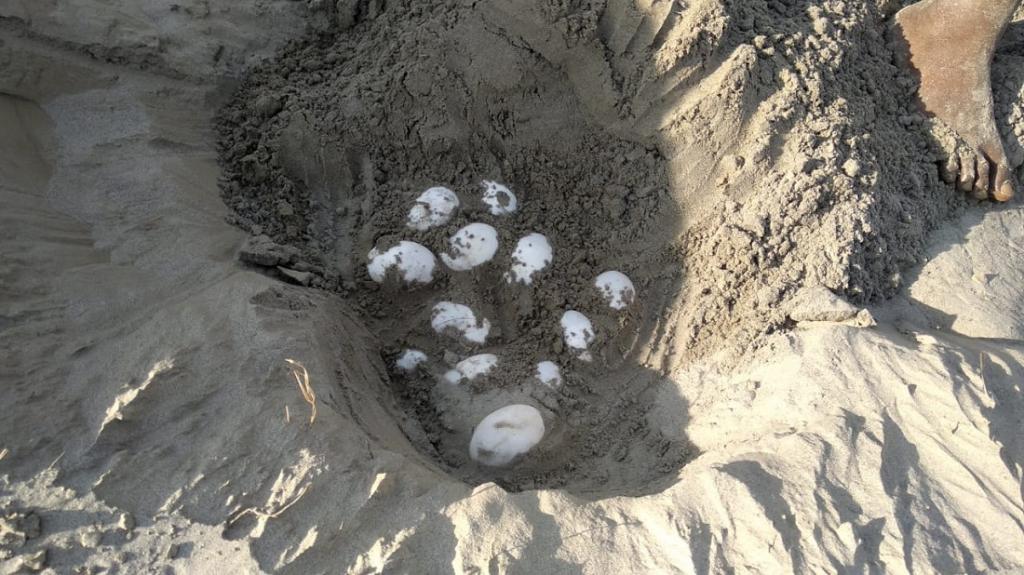 A gharial nest on the banks of the Gandak river. Photo: Mohd Imran Khan

Hundreds of gharial eggs have been destroyed by the swirling waters of the Gandak river in Bihar’s Valmiki Tiger Reserve (VTR) after early floods in the state in June, officials said.

They admitted that it was a big loss to the ongoing conservation efforts to conserve the critically endangered crocodilian.

Hemkant Roy, VTR’s director, said his team had found eight nesting sites with eggs. The eggs were shifted to higher ground for reasons of safety. But two unexpected and consecutive cyclones, Tauktae and Yaas, followed by early floods destroyed all eggs.

“Our team had found 30-40 eggs at each site. Eggs from all eight sites were taken to higher ground. But, the rising Gandak forced officials of the water resources department to open all 36 sluice gates of the Gandak barrage at Valmiki Nagar and release 4.12 lakh cusecs of water last month (mid-June). All eggs were thus destroyed,” Roy said.

Female gharials dig 30-40 centimetre-deep nests on sandbanks in May each year. They usually lay clutches of 25-45 eggs. They guard the nest against predators.

Babies usually hatch by the third and fourth week of June. This year, that was exactly the time when the floods struck, destroying the eggs.

Roy told this reporter that his team will have to go back to the drawing board to work on a new strategy for next year to protect gharial eggs for breeding:

Ensuring the safety of gharial eggs at nesting sites along the banks of the Gandak is a big challenge. Eggs are core to breeding and we have to chalk out a plan to protect them from damage.

He said unlike the last decade, the population of gharials had increased in the Gandak, which was a positive development.

“The state government is serious about increasing the number of gharials through conservation efforts. We have been doing everything to provide a safe breeding season for them. Unfortunately, we failed this time around due to the impact of two cyclones and unprecedented water discharge in the Gandak,” he added.

The Bihar government had started a project in collaboration with non-profit Wild Trust of India (WTI) to increase the Gandak’s gharial population. They first released 30 captive-born gharials into the river in 2014-15. They followed this up with protecting nests by involving the local community.

The project was prompted after a survey by WTI in 2010 found only 15 gharials in the Gandak.

The Gandak hosts the second-largest population of gharials in India after the Chambal river. It has widespread sandbanks and rich wetlands that provide a natural breeding ground for fish, a staple food for gharials.

WTI’s Samir Kumar Sinha said the gharial is ‘Critically Endangered’ according to the International Union for Conservation of Species-Species Survival Commission or IUCN-SSC assessment in 2007.

Its distribution range has shrunk and currently, it occupies only about two per cent of its former range. The gharial population has registered a decline of up to 98 per cent between 1946 and 2006. The adult population has nosedived, with a 58 per cent reduction across its range in just nine years from 1997.