The tiger had strayed 130 km from Valmiki Tiger Reserve in villages of East Champaran district, Bihar 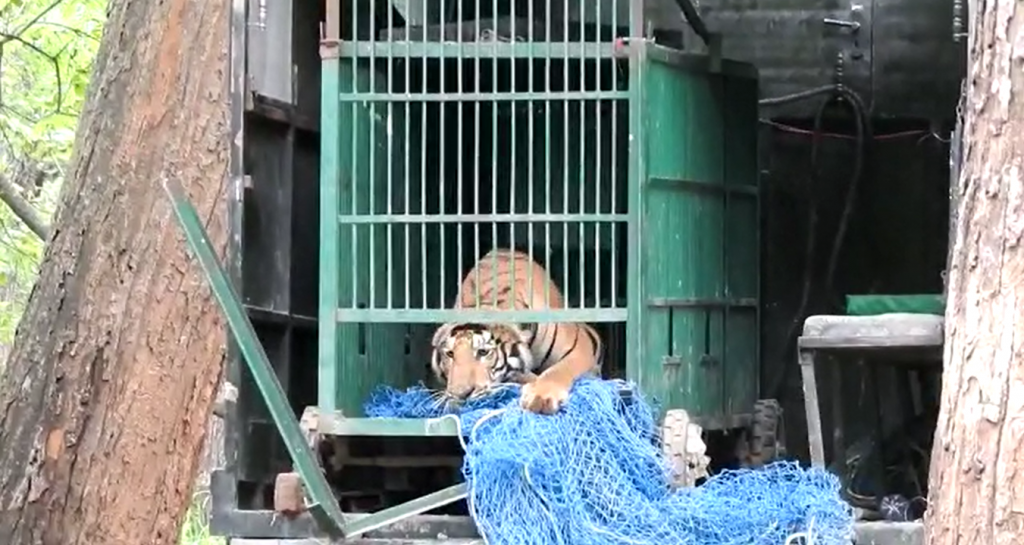 A Royal Bengal tiger, which had strayed from the Valmiki Tiger Reserve (VTR) 130 kilometres into the villages of East Champaran district of Bihar, was caught by a forest department team June 17, 2021 after three days of search opeartions.

The tiger is healthy and has been released in division two of the Valmiki Tiger Reserve (VTR), Battiah, the lone tiger reserve in Bihar.

The tiger was caught from the Chiraiya village in East Champaran district June 17 evening after being shot with a tranquilizer gun twice.

A 60-member team of forest department officials and experts armed with tranquilizer guns and cage vans had been on toes since June 15, 2021, conducting searches to catch the tiger. it has purportedly been roaming around densely populated villages in search of food.

VTR director Hem Kant Roy said the tiger may have strayed from Manguraha range four-five days ago after a possible territorial fight between old and new tigers.

“We had alerted the villagers about the straying tiger and asked them not to disturb it since it has been hungry for four-five days and may harm them,” Roy said June 17.

The tiger did harm any villagers on its way, but its movements caused panic among the local villagers who stopped going to the fields.

Forest officials said the tiger was first sighted by local villagers in a mango orchard in Pakaridayal block of East Champaran. By the time the officials reached there, it had walked inside busy tracks and maize fields.

In February 2021, a wounded tigress had strayed from VTR and died a week after being caught by the forest team. The tigress was unable to hunt for animals in the tiger reserve areas since it had grown old and would frequently come out of the reserve to prey.

The VTR which is spread over 899 square kilometres near the Indo-Nepal border in the West Champaran district has been ranked the fifth best tiger reserve in India. According to VTR officials, the number of tigers has now gone up to 37 now from only eight in 2010.