Students of the Green Revolution within and outside of the academic establishment commonly hold, or believe, that there was something about the trajectory of agrarian development in colonial Punjab that made it peculiarly suited to becoming the laboratory for India's experiment with large-scale capitalist farming using the technological advancements available to the Indian state in the 1960s. In other words, the seeds of Punjab's capitalist transformation had been sown during colonial rule, especially in its latter phases.

Mridula Mukherjee takes on this conventional wisdom and demonstrates in a detailed and coherent argument that though the agrarian system in colonial Punjab displayed features superficially at variance with the underdeveloped agrarian systems of eastern India--Bihar and Bengal--in essence, it was equally constrained, with very little potential for a take-off into self-sustained growth, without external drivers.

Historically and schematically, underdeveloped agrarian structures have some fundamental features subsistence-based production, high degrees of indebtedness at the lower ends of the hierarchy (comprising by far the great majority of peasants owning a small proportion of the land), lack of investment in agriculture by those appropriating the surplus, rents and revenue paid in kind and a lack of significant market penetration. Like 'backward' eastern regions, Mukherjee shows, Punjab had all the above and, in common with eastern India, the presence of one of them market penetration, or commercialisation of agriculture.

In the context of colonial underdevelopment, commercialisation was hardly an index of an incipient tendency towards the growth of a capitalist organisation of production or the transformation of either the forces or the relations of production. On the contrary, as Mukherjee says, forced commercialisation of agriculture in the absence of any fundamental transformation of the economy--specifically, in Punjab, the low levels of industrialisation, even by the standards of de-industrialised colonial India--through inflexible colonial cash revenue demands only made for a market both in land and agricultural produce that reinforced the systemic underdevelopment of agriculture and exacerbated its most unredeemable features those listed above. 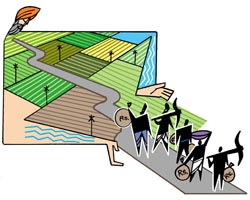 The inflexibility of the state's revenue demand, as Mukherjee demonstrates, led to widespread alienation of land, either through outright sale or other mortgage-related arrangements, creating another classic feature of colonial underdevelopment the growth, in the case of Punjab, of a rentier class first, consisting typically of the professional moneylender/trader; and, later, after the enactment of the Punjab Land Alienation Act, landlords who flooded the credit market after the transfer of agricultural land to 'non-agricultural' land had been outlawed. The problem was that neither the 'professional' moneylenders nor the landowners who took the trade were interested in re-investing into agriculture because rentier income was always a winning proposition whereas investing in agriculture was a throw of the dice because of the unpredictability of the monsoon and the market.

The canal colonies, which, in fact, were the basis of much of what Mukherjee calls the "Myth of Punjab Exceptionalism", may have been slightly better off, but even there, inflated water rates could skim off a significant part of the cultivators' net income.Mukherjee also contests the argument that the revenue assessment in colonial times was reasonable, especially in comparison to the pitch during Ranjit Singh's reign and the implication that this was in part responsible for Punjab's later growth trajectory and the capitalist transformation of its agriculture. She demonstrates that the high and rigid revenue demand was precisely what was responsible for high levels of indebtedness and underdevelopment and goes on to show that many families would, in fact, not have been able to balance the household accounts had it not been for the remittances that came in from the large numbers recruited in the army and, increasingly from the First World War onwards, migrs to the new world.

Before rounding this off, a quibble that does not, however, detract from the main argument. In her comparison between Punjab and eastern India, Mukherjee overstates the case for the growth of landlord cultivation through wage labour in the latter regions as against Punjab's predominantly sharecropping-based economy. But to discount the overstatement would only strengthen Mukherjee's argument.

This is a useful contribution, but a connection needs to be made to fill out the picture to show the disjunction between colonial and 1960s Punjab of Green Revolution vintage, studied in depth by many. This will bring into focus the role of the state after the transfer of power in transforming Punjab, Haryana and western Uttar Pradesh.