Book>> Waves in the Hinterland, The Journey of a Newspaper • by Farah Naqvi, Zubaan Books/Nirantar • Rs 3

In March 2004, a group of Dalit women from Uttar Pradesh’s Bundelkhand region stood on a stage in a plush Delhi auditorium.

Th-ey were honoured with the Chameli Devi Award for outstanding media work. The same year, three of their colleagues received fellowships from the Dalit Foundation in Delhi for reporting on issues related to the rights of the Dalit community. The women in question run Khabar Lahariya: an eight page bi-weekly with a print run of 3,000 in Chitrakoot and Banda districts.

Written in the vibrant Bundeli, the Dalit women live the issues they write about. Besides local, national and international news, it is known for its sensitive handling of gender and caste issues. 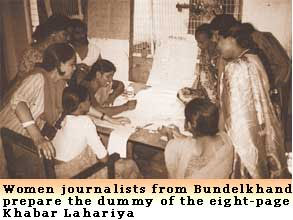 In some ways Farah Naqvi is an insider to Khabar Lahariya,  which means making waves in Bundeli. She works with Nirantar, a non-profit in Delhi that supports the paper with financial and editorial assistance. Naqvi travels with the women as they get stories from villages, put up with stony resistance and get past caste barriers to get the facts. Naqvi is also a witness as they edit stories, staying up through power failures and technical breakdowns to lay out and print the paper. And she shares their exhilaration at the end of a rigorous day (often candle-lit), when they churn out the eight pages.

But Naqvi also maintains scholarly distance. One of the book’s highlights is the account on the debate on the proper dialect for the paper. Bundeli was not always the language of choice. Some of the paper’s founders wanted the paper written in Sankritized Hindi. They felt Hindi would help strike a chord with the upper caste. They argued Hindi would allow Khabar Lahariya access to mainstream power structures. Written Bundeli was also hard to find. Bundeli as the reader’s mothers tongue was naturally easy to understand but not so in the written form. But to their credit, the founders of Khabar Lahariya did not discard the local dialect. Instead, in what could be a lesson for our administrators, they undertook extensive field surveys to make written Bundeli amenable to the readers.

Naqvi’s documentation of this process is a delight for anyone interested in understanding how a local dialect makes its way to print. Also enthralling is the section on how the paper came to be priced. Its founders were keen on distributing it free. But to their horror, they found the vendors would use the paper as wrappers.

The book is a rare account of a rare endeavour. A must read for sociologists, community media people and journalists.

Rati Jairath is a community media practitioner in Gujarat