Legal Grounds has come out at an opportune time.

Amidst debates over Operation Green Hunt, land acquisitions for development and movements for smaller states, the book focuses on Jharkhand—a state formed in 2000 on the avowed ground of giving expression to adivasi identity and against the internal colonialism that deprived local communities of access to natural resources. The forest and mineral-rich state is witness to numerous struggles against development-induced displacement; it is the site for the state’s anti-Maoist military offensive.


The book underscores how the law, though stacked against the marginalized and susceptible to manipulation, is still a key instrument for resistance. The essays in the volume perform two tasks. One, they examine legal struggles related to specific natural resources and show the disconnect between the progressive thrust of laws and the attitudes of implementing agencies. Nitya Rao shows the paradoxical implications of the protective restrictions on land transfer: making bank credit difficult leads to dependence on money lenders and eventually to loss of land. Ramesh Sharan shows how protections against land alienation have been subverted. Ajitha George discusses the impact of mining on the communities losing land and on mine labour. These essays show the hiatus between the Jharkhand movement’s legitimizing basis—its call for a pro-adivasi development paradigm—and the policies of the state government. 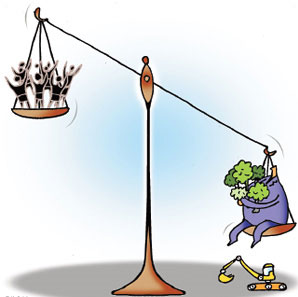 Second, these essays probe the conception of custom, which informs the protective provisions and constitute the ideological and practical arsenal of social movements against the ravages of the State. Carol Upadhya examines the process by which customs got codified into “modern” law in the colonial context. She shows how the language and techniques employed for recording customary rights transferred control over commons to the state, incorporated traditional leaders into the state system, froze dynamic customary practices and ironed out diversities among communities by holding one set of practices as authentic. Land alienation and loss of customary rights have also occurred, as Sudha Vasan shows, through recording of village commons as reserved forests and the non-inclusion of customary rights in forests in various land surveys. This is significant given the insistence of the courts on documentary evidence to substantiate customary claims.

Despite such interesting insights, the book doesn’t adequately address the most exciting part of its agenda: culling out the diverse ways in which laws structure social practices. Though the essays draw from an engagement with social movements, the voices of movements and ngo s—diverse as they must be in their ideologies and strategies—are generalized. The ways in which struggles over law shape identities as well as the implications of such identity constructions for Jharkhand are not fully fleshed out. Still, the essays do prod us towards such a research agenda.