lpg, touted as the cleanest fuel option, is responsible for the release of high levels of nitrogen oxides and suspended particulate matter 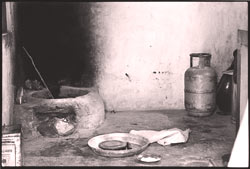 Kitchens are probably the most high-risk area in most homes. Depending on fuel type and burning conditions, combustion sources emit inorganic gases and particulates. They could also emit hydrocarbon gases, vapours and organic particles. Most liquid and solid fuels contain impurities or additives that could result in emissions of metals, mercaptans, sulphur oxides or particles as the fuels burn.

Gas stoves have been pushed as one of the cleanest fuels available today. My colleagues and I have had occasion to study the veracity of these claims. Gas stoves normally burn at a temperature in the range of 800C-1200C. Air reacts with the gas stove flame to produce a variety of gases, mostly falling into what is called the 'classical pollutants' category -- nitrogen oxides, carbon monoxide (co) and sulphur dioxide (so2) and the omnipresent respirable suspended particulate matter (rspm), ie pm10 and pm2.5.

Of these gases, nitrogen oxides are cause for the greatest concern. The concentrations of the other gases are so minute that the pollution they cause is negligible. In air pollution literature, the term 'nitrogen oxides', and the formula nox, is used for the mixture of nitrogen oxide (no) and nitrogen dioxide (no2) in the air. Evidence from experimental research suggests that exposure to no2 is likely to increase respiratory infections, and adversely affect lung functions.

Indoor concentrations of no2 have been the focus of a number of studies. Studies reveal that in five European countries, houses that use gas equipments had average no2 concentrations (over two to seven days) in the range of 20-40 mg/m3 in living rooms and 40-70 mg/m3 in kitchens. The corresponding concentration for dwellings without gas equipment was between 10-20 mg/m3. Transient peak concentrations of no2 during the operation of appliances greatly exceed average measurements -- peak levels in the kitchen may be as high as 752-1880 mg/m3 (Spengler et al, 1981). Persons, usually women, operate these gas appliances at close ranges, and personal exposures could be even greater.

In a study we conducted in 13 kitchens of Jaipur (Gupta et al, 2001), the maximum no2 value obtained for one-hour averages (by the moving averages method) was 311.8 mg/m3. The maximum values for one-hour averages were compared with World Health Organisation guidelines for no2 (200 mg/m3). It was seen that out of 241 such values, 13 exceeded the guideline limit. It is possible that small kitchen sizes, and inadequate ventilation could be a reason for this result.

Our study also revealed that the concentration of rspm was significantly high in the kitchens of Jaipur, ranging from a minimum of 1.6 mg/lit to a maximum of 82.72 mg/l with a mean value of 17 mg/lit -- much higher than the permissible value of rspm concentration outdoors (0.75 mg/l). Particulate matter is known to be the reason for exacerbation of respiratory diseases. Certain chemicals attached to the particles could cause lung cancer if inhaled.

Our study showed that ventilation greatly reduced the presence of particulate matter as well as nitrogen oxides. We observed that an exhaust fan is capable of dissipating 30-50 per cent (or more) gaseous pollutants. However, the location of the exhaust fan vis--vis the cooking stove and the person in the kitchen is very important. It is also important to keep the exhaust fan switched on during the entire duration of the cooking activity. The fan should, in fact, be switched off only a few minutes after the stove is switched off.

A B Gupta is professor, R Jain is reader and T P Gupta is a student, in department of civil engineering, Malaviya National Institute of Technology, Jaipur