US Elections 2020: What is at stake for climate change tomorrow?

A win for Biden is the best-case scenario currently for the climate movement; it is the lesser of two evils 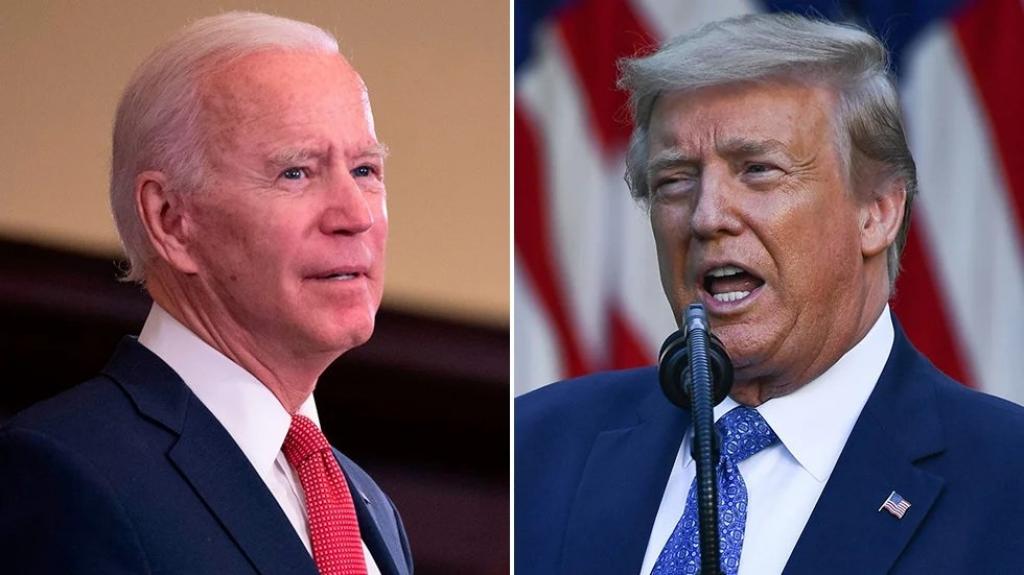 The United States Presidential election takes place this Tuesday, November 3, 2020. Despite the reality-television aesthetic of recent US elections, the stakes remain high.

For climate advocates, the consequences of this election will likely spell ecological destruction regardless of the result. It is the degree and timeline of this destruction that will vary, depending on who wins — harsher and sooner if Donald Trump is re-elected, mildly mitigated and a few years later if Joe Biden wins.

When considering the climate credentials of both candidates, Joe Biden — the Democratic establishment’s favourite — emerges looking better without a doubt, despite advocating moderate policies that are unlikely to have a transformative impact on climate action.

His $2 trillion climate plan commits to spending extensively on climate-friendly infrastructure and sets a ‘Net Zero by 2050’ target for the US.

Trump’s climate credentials are non-existent and have already reversed decades of action, regulation and coalition-building on climate change. As Steven Cohen, an environmental policy expert and public policy educator at Columbia University writes:

Donald Trump and his campaign seek to continue to define climate policy as “job-killing regulation” and anti-working-class policymaking. The battle over the definition of the climate issue is a battle over the agenda status of the issue and its likely outcome. Increasingly though, the effort is to delegitimise the issue and remove it from the political agenda

So, what are some of the pressing climate issues that have the most to lose (or be moderately alleviated) on Tuesday?

Under the Trump presidency, fossil fuel companies have leveraged their ties to the administration to win bailouts for failing coal-fired power plants. Particularly, they have tried gaining access to public funds required for the novel coronavirus disease (COVID) relief for struggling citizens. Despite their efforts, the coal industry’s downward trajectory continues.

Trump also reversed blockades to the construction of the Keystone XL and Dakota Access pipelines and expanded the list of federal areas open to drilling.

Through the Barack Obama presidency, Biden was already complicit in overseeing the largest expansion of natural gas production in US history. He views it as a ‘bridge fuel’ in the transition to renewables, despite the chemical toxicity of the process, methane leaks and infrastructure lock-in that make it anything but ‘clean energy’.

Biden does not support a country-wide ban on fracking. He continues to hold ties to the fossil fuel industry, consulting with Heather Zichal, a former board member of a natural gas company, for climate advice for his campaign.

His climate plan, however, pledges to achieve 100 per cent clean electricity by 2035 and invest heavily in clean-energy research. He has also focused his campaign rhetoric on unionised job-creation in clean energy and also in sectors such as auto-making, whom he hopes to engage in building electric vehicles.

November 4, 2020, the day after the election, is the date set for the US to officially withdraw from the Paris Agreement, the international accord to halt the impacts of climate change.

The Washington Post has listed the ways in which the Trump administration has already caused damage: not making payments to the Green Climate Fund, blocking progress at the Arctic Council and teaming up with oil and gas-rich Russia and Saudi Arabia to water down language about the urgency of climate change during international negotiations.

It has also failed to file, as the Agreement requires, a biennial accounting of total US greenhouse gas emissions from man-made sources.

Scattered coalition efforts like America’s Pledge and We Are Still In may direct some resources to reinforce pockets of US commitment to the Paris Agreement. But the absence of a clear national stance will leave a vacuum at the climate negotiations’ table, that should be occupied by the world’s largest historical emitter of greenhouse gases (GHGs).

Joe Biden, on the other hand, has vowed to rejoin the Agreement as soon as he is elected President. Prior to Trump’s election, the US was already set to miss its Paris commitment to lower carbon emissions by 26-28 per cent below 2005 levels through 2025.

Biden has the opportunity to steer the ship on course to some extent and also join other countries like China and Japan in setting a Net Zero target.

Rejoining the Paris Agreement would take about 30 days and any meaningful policy push would require the Democrats to take control of the Senate first.

Trump relaxed more than 150 climate-friendly regulations over the past four years, including those related to tailpipe emissions, endangered wildlife and rainforest protection — he believes that they are bad for jobs and the economy.

It is likely that a Biden presidency, if he wins, will have to spend considerable time restoring these regulations, which could take US emissions and biodiversity impacts past their safe thresholds.

The climate crisis impacts the poor and marginalised disproportionately and Trump’s re-election would spell disaster for these communities. In the absence of federal aid, they will continue to bear the brunt of intensifying extreme weather events and climate disasters.

Most recently, the administration rejected the California government’s request for disaster relief funds to help the state recover from devastating wildfires in addition to the COVID-19 pandemic. This apathy is not likely to dissolve during a second term.

Biden’s environmental justice plan has set a goal for disadvantaged communities to receive 40 per cent of overall benefits of spending in clean energy, water, transit, etc. He has also pledged to ensure participatory decision-making for the communities involved and hold polluters accountable.

These pledges are a bare minimum requirement — the actual aid extended and benefits reaped may differ, especially since Biden has steadfastly refused to endorse the Green New Deal, which has major provisions for frontline communities.

Implications for the rest of the World

The US has ranked lowest on the Climate Change Performance Index (CCPI) in 2020, published annually by Germanwatch, the NewClimate Institute and the Climate Action Network. In addition to being the world’s largest historical emitter, the US is also currently the largest per capita emitter of GHGs.

Its inaction on the Paris Agreement has made it easier for countries like Brazil and Saudi Arabia to reduce ambition to cut emissions. The impacts will be felt by poorer countries and small island countries through damage from severe storms, climate-driven human migration and agricultural losses due to weather extremes.

Trump’s re-election will most certainly guarantee that the US’ unilateral, protectionist and anti-science stance will continue on the international climate platform. 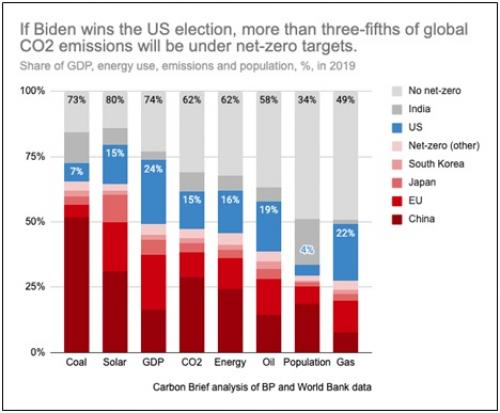 A win for Biden is the best-case scenario currently for the climate movement. While his centrist neoliberal political leanings will favour market-based approaches and heavy private sector involvement in climate action, rather than the transformative government-led overhaul that is needed, it is the lesser of two evils.