What do science-based targets to limit climate change really look like?

Achievement of net-zero emissions in 2050 has been brandished the ‘science-based target’ for all — be it countries, cities, states or businesses. The climate laws passed in Denmark, France, the United Kingdom and New Zealand, as well as the proposed European Union climate law, set this as their target. Establishing net zero as the ‘only science-based target’ has also been emphasised upon in the UK’s CoP 26 Glasgow Action Plan.

As for businesses, net-zero by 2050 as a science-based target was stressed by the United Nations Net Zero Asset Owners Alliance, whose members include many of the names in Big Finance — Allianz SE, AMF Pension, Aviva, Axa, Generali, Munich Re and Zurich Insurance Group, among others.

Indeed, the alliance, which manages $4.6 trillion in assets, explicitly seeks to enhance the work of the ‘Science-Based Targets Initiative’.

What does the science say the world must do to limit warming to 1.5 degrees Celsius?

At the 21st Conference of Parties to the United Nations Framework Convention on Climate Change in Paris, the Intergovernmental Panel on Climate Change (IPCC) was commissioned to look into the question, which led to its special report on Global Warming of 1.5°C (2018).

The first substantive paragraph in the executive summary for the chapter on mitigation pathways compatible with 1.5°C stressed that not only were the current Paris pledges grossly inadequate to limit warming to 1.5°C, but that the limit would be breached “even if these pledges were supplemented with very challenging increases in the scale and ambition of mitigation after 2030”.

The net-zero by 2050 mantra is, therefore, meaningless without deep emissions cuts within the next decade; the IPCC recommended substantial emissions cuts before 2030.

What is the precise quantum of the emissions cuts recommended by science?

The IPCC lays out three illustrative pathways (P1, P2 and P3) that can limit warming to 1.5°C without any overshoot, and estimated the 2030 emissions under each scenario. Using the UN’s latest estimate of the 2030 global population, per capita emissions allowed to each individual in 2030 may be estimated.

The world needs to reduce its per capita emissions from 6.7 tonnes carbon dioxide equivalent per person (tCO2e/person) in 2015 to maximum of 3.5 tCO2e/person in 2030 so as to keep it within the least ambitious P3 scenario.

The same has to be reduced to 2.7 tCO2e/person in 2030 to keep the emissions within the P1 and P2 scenarios. Many rich countries will need to make substantially deeper cuts than this world average (see below). 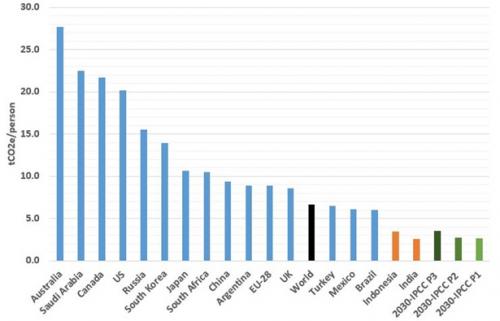 Which pathway should countries prefer?

One key difference between these pathways is the use of Carbon Capture and Storage (CCS) technology, which captures and stores emissions that will otherwise be released into the atmosphere.

A variant, Bioenergy Carbon Capture and Storage (BECCS), does the same for emissions from biofuel combustion; as sustainably sourced biomass is carbon neutral, BECCS claims to deliver ‘negative emissions’. Slower decarbonization necessitates the large-scale use of these technologies to stay within 1.5°C.

While the P1 scenario employs no CCS or BECCS, the P2 scenario employs these systems on a scale considered challenging. The P3 scenario, with markedly slower decarbonization, employs both CCS and BECCS at a gargantuan scale.

But carbon dioxide removal (CDR) technologies have seen no large-scale use anywhere in the world, and the IPCC notes that large-scale CDR deployment is subject to multiple ‘feasibility and sustainability constraints’.

In the case of BECCS, these constraints include the massive acreages of land required to grow biofuel crops; the P3 scenario needs 7.2 million square kilometre in 2050 as compared to 0.2 million sq km needed under P1 scenario.

Given the uncertainties of CCS as well as constraints on feasibility, an excessive dependence on the technology would be risky. The P3 scenario may, thus, be excluded and targets for emissions mitigation may be defined in terms of the near identical 2030 emissions estimates under the P1 and P2 scenarios.

Therefore, to limit warming to 1.5°C, Australia needs to cut its per capita emissions by 90 per cent over 2015 levels by 2030; Saudi Arabia, Canada, the United States, Russia and South Korea by over 80 per cent; Japan, South Africa and China by over 70 per cent; and Argentina, the former EU-28, and the United Kingdom by over 60 per cent.

The world as a whole, as well as Turkey, Mexico and Brazil need to cut per capita emissions by over 50 per cent by 2030 (see below).

Science-based targets for per capita emissions reduction (2015-2030) to limit warming to 1.5°C.
Source: CSE, based on IPCC, SR15 and UN World Population Prospects 2019

But even these seemingly challenging numbers represent the lowest level of climate ambition for developed countries. To begin with, the 2030 per capita emissions figures estimated from the IPCC scenarios are consumption-based emissions, which include emissions from imported goods and services.

The targets are also not in accordance with the principle of Common But Differentiated Responsibilities and Respective Capabilities enshrined in the Paris Agreement. This requires countries that have contributed the most to global warming, as well those whose wealth has made them capable to fight climate change, to do more.

Adherence to international obligations as well as a commitment to climate justice demands that rich countries make deeper cuts to their emissions than merely equalising per-capita emissions by 2030. But even equalising emissions would be a start.