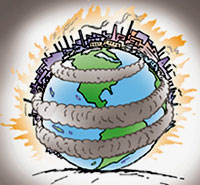 The uk report authored by economist Nicholas Stern is important for this reason. It is an economist's warning in a world run by them. I say this because for far too long these smart people have argued that climate change is too uncertain and, therefore, there is no reason to take high-cost action today. It is better to wait and see, if necessary adapt. It has also been assumed that in this scenario, as climate change happens in the far future, technological innovation and transition will also happen. The market will happily provide answers. But most of all, this breed has lulled us into complacency. There will be no costs to the transition towards an economy which is able to delink economic growth with the growth of its emissions, they have said.

It is time we stopped fooling ourselves. The fact is that warming of the global atmosphere is possibly the biggest and most difficult economic and political issue the world has ever needed to confront. I say this because, firstly, emissions of carbon dioxide are directly linked to economic growth. Therefore, growth as we know is on the line. We will have to reinvent what we do and how we do it. There will be costs, but as Stern says, the cost will be a fraction of what we will need to spend in the future.

Secondly, the issue is about sharing that growth between nations and between people. The fact is that global economic wealth is highly skewed. Put in climate terms, this means that global emissions are also highly skewed. The question now is whether the world will share the right to emit (or pollute) or will it freeze inequities. The question is if the rich world, which has accumulated a huge 'natural debt' overdrawing on its share of the global commons, will repay it so that the poorer world can grow, using the same ecological space?

Thirdly, climate change is about international cooperation. The fact is that climate change teaches us more than anything else that the world is one; if the rich world pumped in excessive quantities of carbon dioxide yesterday, the emerging rich world will do so today. It also tells us the only way to build controls will be to ensure there is fairness and equity, so that this biggest cooperative enterprise is possible. Think of climate change as the fallout of the feverish embracing of the market.

What must we do to contain it? We must accept the world needs to go beyond the weak commitments of Kyoto Protocol to even stabilise carbon dioxide emissions at 550 parts per million. This level is considered by many to be extremely dangerous because it accepts doubling of pre-industrial levels of carbon dioxide in the atmosphere. By most assessments, this stabilising will require cuts between 30-50 per cent of the current emissions soon. All this means we need to take hard action, fast.

The way forward would be to re-negotiate the world's agreement on combating climate change. But this time the agreement must be political. It must reflect the desperate urgency of the world. It must be fair and meaningful. In other words, it must not take the world another 15 years to cut emissions and get something as weak and pusillanimous as the current Kyoto Protocol.

The fact is that the world has changed in more than more ways. There is clear understanding that the rich and the emerging rich world needs to make the transition to a low carbon economy. There is also much better understanding that the route ahead is made up for technologies that we have in hand currently. It is not about inventing new things, but using much more efficiently and effectively the technologies of the present. Therefore, answers will lie in increasing efficiencies in both the generation of energy and in the use of energy in manufacturing other products. It will also lie in the change in how we do things from transportation policies in our cities to everything else. The fact is that we need to know how to change.

It is also clear that the emerging rich world, China, India and others, is showing itself to be more efficient per unit of output within their limited means than the industrial world was. The fact is they would want to improve if they were compensated for it. The question then is why can we not move ahead?

The answer lies in the way we have framed the questions. It has been lost in the obduracy of the us government, which has never accepted the need to build a fair and cooperative agreement to combat climate change. The us, still the world's single largest contributor to climate change and whose emissions continue to grow, says it will not join an agreement which does not involve India and China. The result has been a weak and compromised agreement called Kyoto, which allows renegade polluters -- the us and Australia to opt out.

This must change. Ultimately, climate change is the true globaliser. It forces our world to come together not just to make short-term profits for some, but long-term economic and ecological benefits for all. Let us continue to discuss how this can be done.