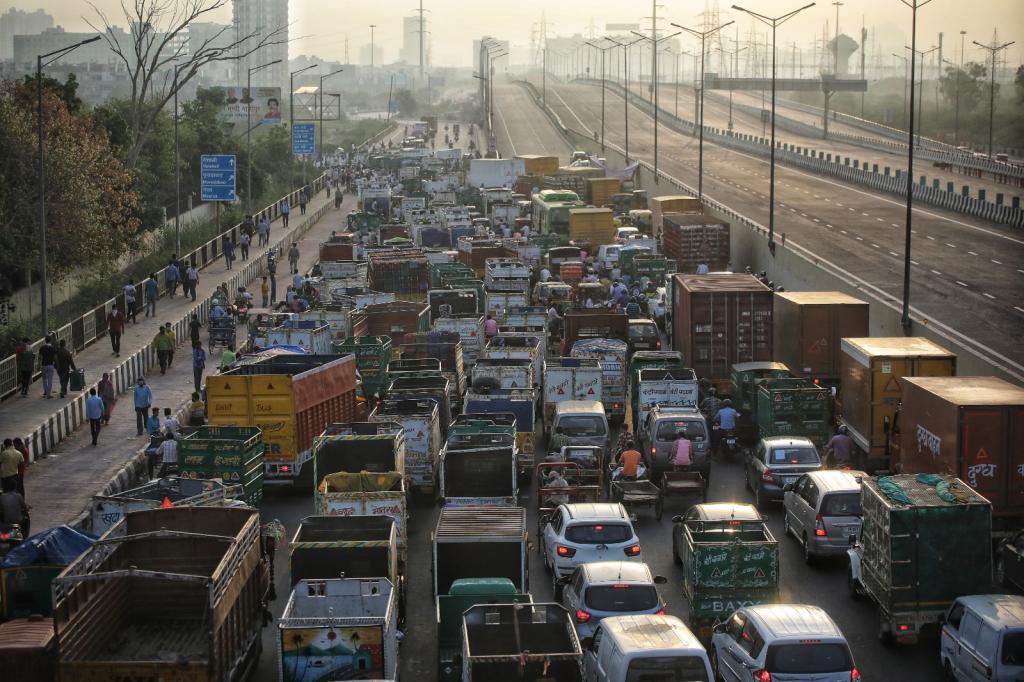 India is the fifth-largest market for passenger vehicles. With its deep-rooted socialism and a high middle-class population, it has one of the most conservative markets where pricing of vehicles and after-sales economics drive purchases.

Social class, prestige, vehicle robustness and mileage: These are some of the other parameters on which people purchase cars.

It is, therefore, surprising that the current portfolio of information does not lay enough emphasis on fuel efficiency. In fact, an average car owner does not have information on the synergistic links between fuel economy standards and emission control systems within a vehicle.

Robust fuel efficiency norms in vehicles closer to the global standards help achieve cleaner air and have a direct economic benefit as well. The costs of petrol and diesel in major cities has risen steadily since 2018: They have been well above the Rs 60-mark, even as prices of crude oil fell sharply in global markets.

Even then, a conservative Indian customer does not delve enough into fuel efficiency and regulatory standards for potential vehicle purchases. It does not help that the information available is, at times, sparse.

Fuel efficiency is, therefore, not a consumer’s primary concern, and vehicle manufacturers have little incentive to innovate technology and ensure the same. Meeting norms is merely an exercise in ticking boxes set by the regulatory bodies.

The first set of standards for the passenger cars segment was released in early 2016 and has been implemented since 2017-2018.

In August 2017, the fuel economy norms for heavy commercial vehicles were notified by the Union Ministry of Road Transport and Highways (MoRTH). The norms were lax compared to the European Union standards and other international standards, which made it easier for car makers to comply with them.

All car makers in the M1 category (vehicles not weighing above 3,500 kilogramme) were able to meet norms quite successfully, according to the compliance report released by MoRTH for 2017-2018. Phase II of the same standards are expected to be implemented by 2022; they are more stringent than the previous ones, but still lax when compared to the 2021 EU standards.

In the earlier years, the fuel economy levels for Indian car models was confidential: There was no official policy that mandated car-makers to disclose the exact rate of fuel consumption for their models.

However, India now has a two-pronged approach towards reduction in fuel consumption:

The CAFÉ standards were first notified in 2017 by the Union Ministry of Power (MoP) under Energy Conservation Act, 2001. The regulation is in accordance with the fuel consumption standards of 2015 that aim to increase fuel efficiency of vehicles road by 35 per cent by 2030.

MoRTH is the nodal agency responsible for monitoring and reporting a summary of annual fuel consumption by automobile manufacturers at the end of each fiscal year. The regulation was introduced in two target phases: Carbon dioxide emission target of 130 gram / kilometre by 2022-23 and 113 g / km 2022-23 onwards.

The idea of CAFÉ is to push manufacturers to achieve fuel efficiency targets by producing and selling more fuel-efficient models, including electric vehicles.

However, in FY 2017-18, a review of fuel efficiency standards compliance suggested that manufacturers were already compliant with the existing CAFÉ standards; the fleet average CO2 emissions was 9 per cent ahead of the target already, and 7.3 per cent away from the upcoming target of 2022.

In 2016, the MoRTH made it mandatory for vehicle makers to publish ‘Form 22’ for each car model. Form 22 details out pollution standards, safety standards, road-worthiness, brand, chassis number, engine number, emission standards for each pollutant such as nitrogen oxides, particulate matter and hydrocarbons, and noise values from the horn among other details.

While this treasure trove of information must ideally help the consumer make informed choices, in reality, most vehicles owners neither received Form 22 nor had any information while purchasing the vehicle.

Form 22 can help a consumer narrow down his or her choice towards a car model that will have a lesser impact on greenhouse emissions. But sadly, even the urban, new informed, educated and environmentally conscious consumer does not know about it.

Some vehicle dealers around Delhi claim to not have received it from manufactuerers. Other credible source of information include the industry reports, data published by carmakers on their websites as well as fleet brochures.

But most consumers barely understand the jargon and implications of buying a not-so-ideal vehicle. While standards and values may be readily available for one car model, they may not be available for others in the same price and size bracket.

Hence, making a meaningful comparison is nearly impossible. Technology enthusiasts who follow car and bike blogs fare somewhat better while selecting vehicles with maximum fuel efficiency and minimum emissions. But this group is only a niche, usually limited to major cities.

How much India’s new cars emit 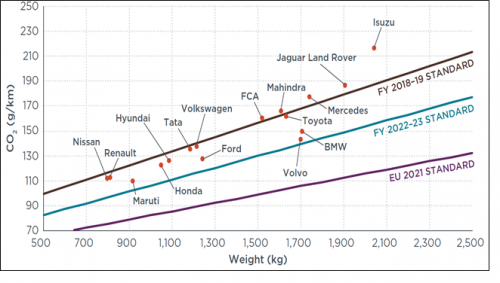 Several countries have labels: United Kingdom has the ‘green label’ that details the amount of CO2 released by a car per kilometre. Singapore-based manufacturers must affix a fuel economy label known as “FEL”, which provides the litres of fuel expected to be consumed for every 100 kilometres. Thailand has had ‘eco-sticker’ on windshields of cars since 2015, that inform buyers of the safety norms, emissions and fuel economy rating of cars.

Among the newer entrants, Philippines and Montenegro agreed to get fuel economy labels on cars registered after 2020. The information and label design were decided after long discussions among the governments and industry stakeholders.

The Indian auto industry has been experiencing the worst slump in decades. All major players have performed nearly poorly in the quarter ending March 2020. Nearly all companies recorded zero sales in April 2020, with the recovery being sluggish in subsequent months.

Even two-wheelers fared terribly: Yamaha Motors has witnessed a drop of 36 per cent in domestic sales since January, even with the general preference for personal mobility options, due to the ongoing novel coronavirus disease (COVID-19) pandemic.

Projections are not too optimistic either. Demand is expected to gradually increase in October as the festive season kicks in. The industry requires every possible measure to boost consumption and accentuate sales. Automakers will benefit if they openly advertise that the fuel efficiency standards are being met by them.

With the implementation of the Bharat Stage VI norms and the push for electric vehicles, the spotlight on cleaner transportation as a means for a green recovery post COVID-19 is immense.

This is perhaps a ripe time to foster innovation and push tighter standards that help bring us closer to meeting our Zero Emission Vehicles mandates. A transparent and robust consumer information system for fuel efficiency in India will, thus, stimulate the uptake of cleaner vehicles.