Over 55% or $150.81 billion of public money committed by G20 countries is allocated for supporting fossil fuel energy

The ‘Group of 20’ (G20) countries are banking on fossil fuel-based recovery as a response to the novel coronavirus disease (COVID-19) pandemic, showed data from a study conducted by online resource base Energy Policy Tracker July 15, 2020.

The G20 countries announced 251 new or amended energy policies since the onset of the pandemic early this year, according to the study.

At least $267.10 billion of public money to support different energy types was committed by G20 countries.

Clean energy, on the other hand, gets only $88.63 billion of the total public money, according to the study.

This is despite repeated warnings against the use of fossil fuel in recovery plans by inter-governmental bodies like the International Energy Agency (IEA) and the United Nations.

The IEA in its Clean Energy Transition Summit attempted to encourage the participating countries to build their recovery plans and investment strategies inline with clean energy transition goals.

Policy interventions and schemes that form a part of the recovery plans of the G20 countries include:

The investment of public money in fossil fuel by the countries translates to $32.89 per capita, while it is $19.33 per capita for clean energy, according to the study.

Fossil fuel recovery as a component of the energy mix is the widest in the United States. The country committed $58.12 billion for fossil fuels, close to 40 per cent of the total global commitment in this energy type. Of the 15 policies listed for the US, 11 support fossil fuels.

Brazil is the only country in G20 to stay away from supporting fossil fuels. China, Germany, India, Japan and the United Kingdom are the only other countries whose commitments for clean energy rank higher than those for fossil fuels.

The mix: Which fuel gets how much 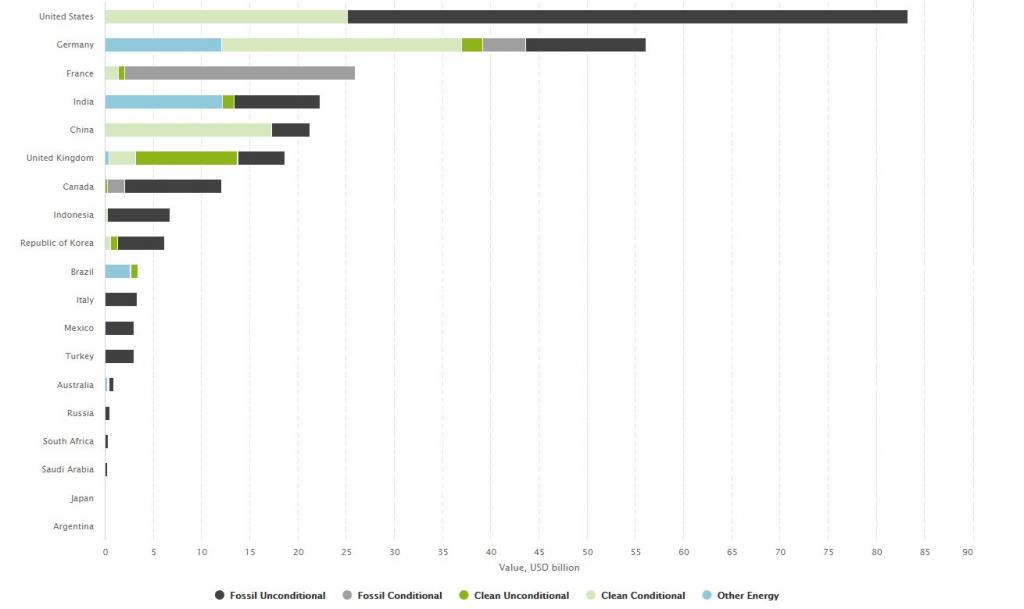 In the present crisis, when countries are grappling with an unprecedented health crisis and the signs of climate change are evident, it is vital to re-invent recovery methodologies for a green and clean future. Investing in fossil fuels will aggravate the grim situation of the environment and global warming.