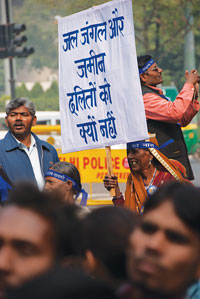 Access to drinking water is a weapon of social discrimination in India. It is well known that higher castes have traditionally controlled access to water. What is less known is that the intensity of discrimination has increased of late. A scan of newspapers shows that of the 250 water-related conflicts reported in the past two years, 180 concerned access to sources of drinking water, most of them common. Of the 27 people killed in such conflicts, 14 belonged to the SC/ST communities.

How did it happen? With traditional common water sources like tanks, ponds and streams drying up, hand pumps and tubewells set up under government programmes have emerged as the new commons. The SC/ST population is more dependent on public water sources, unlike well off people who can afford private sources. Two-thirds of India’s rural population not provided drinking water provisions belong to the Scheduled Tribes and Castes and other economically backward communities. About 56 per cent of the Scheduled Tribe population and 59 per cent of the Scheduled Caste population depend on public water sources, according to the National Sample Survey Organisation.

This is where discrimination takes place. A survey done by non-profit ActionAid that works for the poor and the marginalised makes it more clear. The survey, covering 560 villages across seven states, showed half the SC/ST households in Uttar Pradesh and Bihar, and nearly all such households in West Bengal faced discrimination in accessing water from common sources. Ten per cent villages in the survey reported that socially backward people access water through separate queues.

At a rally in Delhi this month, some 40,000 members of socially disadvantaged communities known as Dalits demanded equal access to drinking water. Leaders of organisations working for the welfare of Dalits made an interesting observation.

Accentuated discrimination, they said, was linked to ecological degradation and absence of democracy. Earlier, discrimination was there but availability of water was not a problem. Ecological degradation triggered drying up of sources and government became a prolific provider of water through hand pumps and tubewells. This depleted groundwater, leaving thousands of hand pumps and tubewells redundant. Today, most parts do not have enough water for close to six months.

Most of the conflicts crop up during this time. Leaders say most of the public provision for drinking water has been made in the vicinity of upper caste settlements. This is because local communities are not involved in placement of water sources. In the face of scarce resource and virtually no alternative (traditional waterbodies), it is a bitter fight for access.

Is there a way out? Many Dalit leaders advocate democratic community organisations that give Dalits equal rights and representation. Here is an example that may explain why such organisations are vital to ensure equal access to water sources. In Mastapur village of Madhya Pradesh’s Tikamgarh district emergency water tankers follow a route chart.

The village has a committee of representatives of all castes that makes sure that tankers adhere to the route chart. The first stop of the tankers is the hamlet of the village’s deprived Scheduled Caste residents. This seemingly small social innovation that followed the fifth consecutive drought in the district in 2008 has become a practice across the district. The water tanker with the route chart pasted on it has become a symbol of water equity.

The committee now supervises the panchayat’s work on water conservation; it is trying to revive six wells spread across the village. “The village has tested equal access to water for the first time. It is very liberating for the Dalits. It has encouraged their participation in local governance,” said Sanjay Singh of non-profit Parmarth that works in the village.

In the past two years, the village has not reported a single incident of conflict over water. Caste still remains a reality but Mastapur has successfully kept it out of water sources.