Gimmick or otherwise, austerity is once again in fashion. People’s travels could be for a purpose or for pleasure, not so for ministers and government officials. They travel for specific purposes. The publicly stated purpose could be, and usually is, very different from their private intent. Many such travels are undertaken ostensibly for learning purposes. The Congress wants its ministers to ‘learn’ to travel cattle class.

The Nobel prize winning economist Herbert Simon’s travel theorem is about ‘travel for learning’. Simon is the father of artificial intelligence. The economist travelled on many fact-finding missions that were costly and time-consuming.

His experiences led him to enunciate his theorem in his book, Models of My Life. It runs thus: “Anything that can be learned by a normal American adult on a trip to a foreign country (of less than one year’s duration) can be learned more quickly, cheaply and easily by visiting the San Diego Public Library.”

Now that cattle class travel is the sine qua non for Indian ministers and officials, it is worthwhile paraphrasing Simon’s theorem for application to Indian governmental travel. The Indian version could read, “Anything that requires to be learned by an abnormal Indian adult cannot be learned without costly jaunts.” (The theorem is axiomatic. Our ministers and their minions are abnormal and it is applicable only to this class of Indian adults). 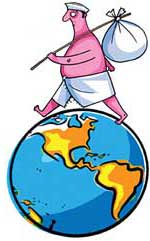 Unlike Simon’s theorem, ours could have corollaries and may need explanation. The phrase “abnormal Indian adult”could be termed uncharitable but answers to a couple of questions give the rationale for using the appellation. Why would anyone spend crores of rupees to be elected to bodies where they are abused and accused of crimes, unless they were abnormal? Why would intelligent, highly qualified persons strive for jobs that pay a pittance when private employment pays several times the amount, unless they were abnormal? So, a corollary to the Indian theorem could read: “Unless proposals of these abnormal Indian adults are presented as outcomes of costly, well-publicized travels for learning, they should not be accepted by the public and the travel expenses from the exchequer be justified.

The chief minister of Karnataka went with a sizeable delegation to China and discovered that Chinese economic success is attributable to the adoption of the two-child norm. Should we not echo the Idea Cellular advertisement and say, “What an idea, sarji!” The officially stated purpose of the trip was to promote Chinese investment in the state. The discovery of the secret of China’s economic success is a bonus. There was no official announcement on the investment proposals the chief minister made to the Chinese or about acceptance of any of these by them. That, however, is a minor glitch, in an otherwise successful foreign ‘travel for learning’ exercise.

The second example of ‘travel for learning’ is the one by Karnataka chief minister’s adviser on urban affairs to Ahmedabad. The reason for travel was that Ahmedabad is “one of the best planned cities in India and Bengaluru has a lot to learn from the city”. An important idea he ‘learned’ from the trip was the practice of “completing projects in the stipulated time through public-private partnerships (ppp)”.

One wonders if any government ever completed any project in time before ppp was invented. The Chinese seem to have completed the Tibetan railroad without ppp. Perhaps, another travel to China is warranted.

Whether these travels were in cattle class or not, is not known. However, the public would now have no inhibition in accepting proposals that might emanate from them. Only a child, like in the fable, The Emperor’s New Clothes, could ask, “Why not gather information from the Internet or the nearest government/public library?”

It might be appropriate to conclude this piece by suggesting another ‘travel for learning’. Chandrayan has discovered water on the moon. A travel to the moon for studying the possibility of solving Bengaluru’s water problem is necessary. It is not immediately known whether cattle class for moon travel is available or not.

Mathew Thomas is with the Bangalore Citizen’s Action Forum