Many in tribal India have given up on traditional food

Some months ago I went on a long journey through parts of tribal India. Getting off the bus in Malkangiri district, supposedly the most backward region in Orissa, I headed for a village which I frequented a decade ago. I noticed the trail had been widened and "murram-ed" to make way for jeeps and pick-ups. Many of the old silk-cotton and mango trees had vanished. The lack of shade told on me. As I knew most people well, the mel -- liquor distilled from mahua flowers-- made its appearance soon on my arrival.

I wandered about the village, exchanging news and taking in what I saw. Many friends had aged too soon. Even Chuklu, not much older than me, had lost his sturdy build and looked skinny. We greeted each other with warmth and had dinner of rice and chicken--slaughtered in my honour. It was time to go to sleep afer that.

It was only in the morning I noticed something amiss the sound of the dhekki, the rice-pounder. For years I'd woken up to the du-dung-tak, du-dung-tak rhythm of tribal India, just before dawn. The silence troubled me.

The morning rhythm, I learnt later, had been exchanged for subsidized rice, available for Rs 4 a kg to anyone who had a carad (card). Most people had stopped cultivating sorghum and the lesser millets. It did not make sense to grow one's staple food when carad rice was there for the asking. Over the week--I visited three other villages--I realized that people hardly seemed to be going into the forest to gather food. The only forest resources they spoke of were tendu leaves, mahua flowers, tamarind and bamboo. These were sold in bulk to traders for cash, except a part of the mahua used to brew mel.

People were focussed on the local bank from which they needed a loan; on the Block Development Office and the sarpanch who was to sanction the village well. Photo, photocopy, faram (form), duskath (signature), were common words now, just like their variants in other parts of India. The youth, on whom parents relied, were keen on going to the town for coolie kaam (porter work) to earn money. Money, usually spent on mahua or angrezi liquor. I found little difference between these villages and those in rural Tamil Nadu, where state benevolence has stripped the people of dignity.

The next part of my journey was through difficult terrain. I headed for a village in the hills steep narrow paths, mosquitoes, and most streams reduced to a trickle. I walked almost six hours before reaching the village where I had spent time some years ago. Not much had changed. A few boys greeted me and escorted me to Jadu's hut, where I usually stayed. It was dusk, so I brought in the fire logs that lay outside, made a fire, and waited for Jadu. His wife said he had gone out to "kill" fish. "With what?" I asked. "With kuvva, this year we had a good harvest of kuvva". (Rand-ia dumetorum. Its dried powdered fruit is used to stupefy fish). Jadu returned in time with the cattle. He looked the same, as did the others, apart from a few more lines around their bright eyes and more grey in their long hair. We cleaned and cooked a part of the fish caught that day and hung the rest over the fire to smoke. There were other meats drying, presumably hare and wild boar. 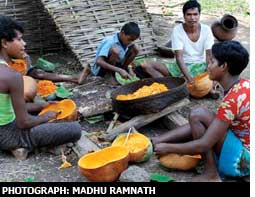 I woke up to the beat of dhekki rap. After a wash, Jadu and I joined a group of men around the toddy palm. The first rays of sunlight caught us sharing the cool and healthy beverage and swapping dreams. We decided to go fishing after an early meal. We were about six, including two boys who were less than ten years old. The dry season had begun, there were few fruits in the forest and only some species of ber (Ziziphus), which we gorged on. Along with catching fish we dug up a basketful of yams (Dioscorea), collected a handful of fat chindpuduth (larvae that live under hoenix bushes) and found three rats in tree hollows.

At dinner I asked Jadu if he bought carad rice. "No, no one here has bothered to, though the sarpanch did give us the cards. The landa (beer) from that rice tastes awful. But we do carry it up when we have a feast, as the women get tired of pounding all day." In the hills, away from the market, the adivasi people grew rice and millets, pulses and cucurbits. They gathered plants and trapped and hunted small game for food. Not many doctors cared to visit them, and the people maintained a healthy distance from the state.

Over the last five or six years some of us, who have come together as the Legal and Environmental Action Forum, have been promoting forest food--red ants, rats, larvae, wild honey, monkeys, tubers, snails, bamboo-shoot, laughter, and much else. This calls for excellent forest management. Not easy, with so many new and officially approved land-grab techniques de-notification of forestlands, steel and thermal plants and mining leases. There is also the general notion that rat-eating dulls the shine of India Inc. But we persist with the knowledge that only a direct link between adivasi people and the myriad forest resources--a link sharpened through observation and practice--can keep our heritage alive. And in good humour and health

Madhu Ramnath is an ethnobotanist