Mainstreaming co-treatment of faecal sludge for reducing pollution in Ganga

Excreta of 73 per cent of UP’s population is not managed safely. Out of this, 48 per cent is dependent on on-site sanitation systems

Uttar Pradesh represents almost a fourth of the drainage area of the Ganga basin in the country. More than half the state’s population is dependent on on-site sanitation systems like septic tanks.

These on-site systems need to be emptied periodically, depending on their type. Waste generated by an on-site sanitation system is called faecal sludge, while waste from a properly designed septic tank is known as septage.

A septic tank designed according to the code of the Bureau of Indian Standards must be emptied every two-three years. The business of emptying faecal sludge in most cities is run by private agencies that are unregulated and informal in nature.

It is mostly discharged in open drains, water bodies or rivers due to a lack of regulation and enforcement of septage management in urban India, resulting in the contamination of water bodies.

Faecal sludge is 10 times more concentrated than sewage or wastewater from households connected to sewerage networks, including water from toilets, bathing and wash-water from kitchens.

Faecal sludge and septage is highly concentrated in terms of organic content, solids and pathogens, making it much more detrimental to the health of a water body.

A shit flow diagram prepared by Delhi-based non-profit Centre for Science and Environment (CSE) in 2018 for 66 major cities in UP showed excreta of 73 per cent of the population was not managed safely.

Shit flow diagram for cities in UP 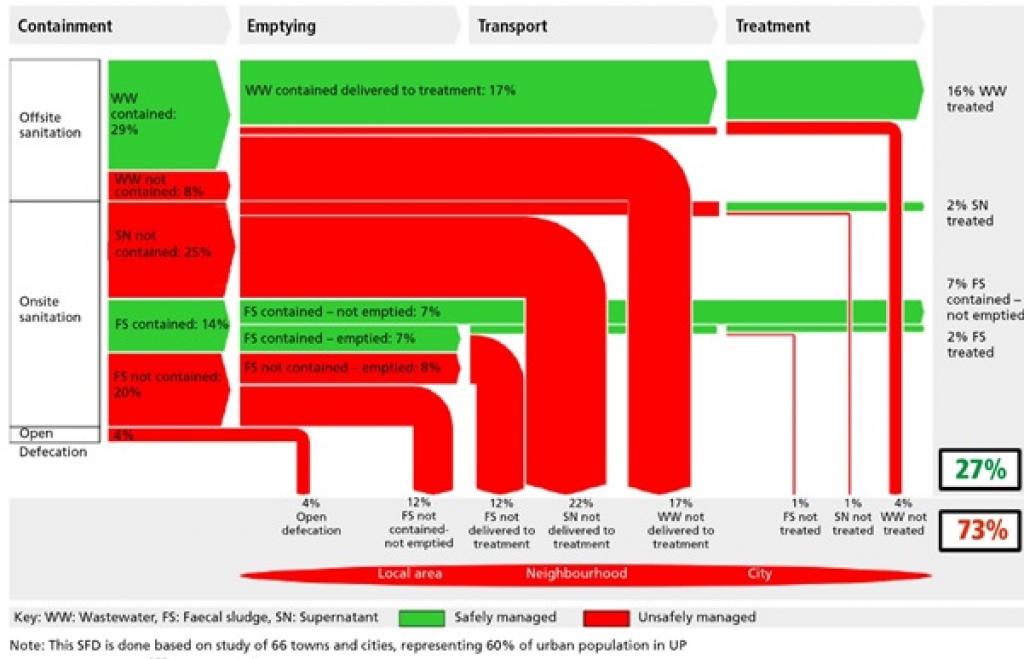 Out of this, 48 per cent is dependent on on-site sanitation systems. Safe disposal of faecal sludge is, thus, of paramount importance for preventing the pollution of water bodies.

UP now has more than 100 sewage treatment plants (STP) with an installed capacity of close to 3,200 million litres per day (MLD). Around 21 of these STPs are along the Ganga.

Most of these STPs run under capacity because of the lack of coverage of household connections to the sewerage network. In many cities, nullahs (open drains) are tapped and diverted to STPs. This results in the influent of STPs being diluted.

This was confirmed by testing done by the CSE lab of influent and effluent parameters at an STP in Lucknow’s Bharwara area, as part of performance testing faecal sludge treatment.

A 2018 CSE study of excreta management in 66 cities across UP found a number of cities with an existing sewerage network designated with faecal sludge disposal points.

Better enforcement and monitoring, however, is needed to ensure faecal sludge is disposed in these locations. Some cities with designated disposal points include: 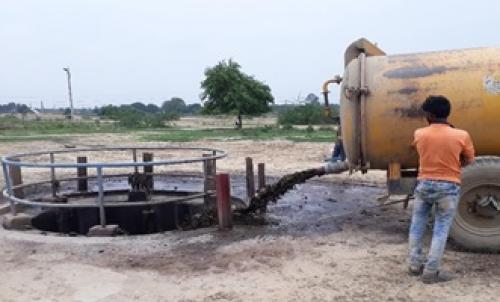 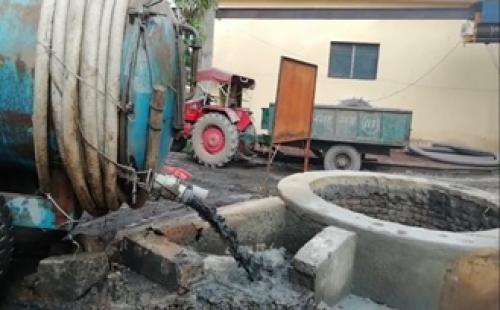 Faecal sludge being discharged at a sewage pumping station in Ghaziabad. Source: Author

Only 29 of the state’s 652 cities either have a partial sewerage network or an existing STPs. This sewage treatment infrastructure has a huge potential to treat and safely dispose faecal sludge and prevent pollution of the Ganga. There is already some momentum of faecal sludge treatment in several facilities across UP.

Huge investments were made in developing sewerage infrastructure and STPs through several schemes, including the Ganga Action Plan, Jawaharlal Nehru National Urban Renewal Mission, Namami Gange and the Atal Mission for Rejuvenation and Urban Transformation. It is imperative that this infrastructure is properly operated and maintained.

It is important to highlight a major difference between sewage and septage / faecal sludge. The organic content in sewage reaching STP is rather fresh and undigested, compared to faecal sludge stored in a septic tank for at least three years.

The percentage of solids in sewage is also less than that of faecal sludge. Faecal sludge has a high percentage of digested solids, which means such solids have good settling characteristics.

Sewerage network and STPs are, however, not typically designed for this. High settable solid content makes these systems more vulnerable to blockages, choking and reduced efficiency.

The existing load of faecal sludge received by sewerage networks and STPs in UP’s cities is less than one per cent of the wastewater. It is unlikely to impact the efficiency of the sewerage network.

There have, however, been reports of pumps in sewerage networks getting clogged due to excessive addition of faecal sludge. There is an increased policy push towards increasing the frequency of septic tank emptying and ensuring they are disposed in designated disposal sites (a sewage pumping station or STP in many cases).

There is a danger that such a policy push can lead to a scenario of indiscriminate disposal of faecal sludge in STPs / sewerage networks, leading to blockages and disruptions in the efficiency of treatment.

Pre-treatment units at STPs or sewage pumping stations, including solid-liquid separation units before faecal sludge enters the STPs, were suggested by CSE in a report to the UP government.

Countries like Malaysia have made it mandatory for STPs to have a pre-treatment unit, including solid-liquid separation, before faecal sludge enters.

Solid-liquid separation removes digested solids and prevents operational impact of faecal sludge in an STP. Such an intervention needs investments to the tune of Rs 20-30 lakh. This can help safeguard and sustain already huge investments made in sewerage networks and STPs.

The first STP to introduce a solid-liquid separation unit for discharge of faecal sludge in the country is in Manglaghat, in Odisha’s Puri.

The UP government’s urban development department recognised the importance of co-treatment with necessary precautions. Through the UP Jal Nigam, co-treatment modules are being implemented in 32 cities in the state, with a co-treatment module already under construction in Modinagar.

Prioritising co-treatment of faecal sludge in STPs can also help the National Mission for Clean Ganga in achieving the objective of Ganga rejuvenation. Co-treatment can be planned and implemented in the existing and upcoming STPs in 97 priority cities along the main stem of the Ganga.