The saperas (snake-charmers) of Delhi loive in a unique colony called Mollarbandhgaon. This community, located next to the Badarpur thermal power station, is known locally as sapera basti -- community of snake charmers. The community has been living in Delhi for decades and today forms the largest congregation of snake charmers in the city. The colony was a regular stop for tourist buses not long ago. The sight of deadly cobras undulating to the music of the flute would excite the tourists to no end. But today the people here will not even admit they keep snakes 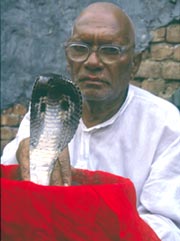 Middle-aged Bedunath wears saffron-coloured clothes and sets out daily with two snake baskets slung over his shoulders. He spends the entire day walking the streets of Delhi blowing on his flute, mesmerising snakes and passersby alike. Bedunath resides in a unique colony in Delhi called Mollarbandhgaon. This community, located next to the Badarpur thermal power station, is known locally as s apera basti -- community of snake charmers.

The community has been living in Delhi for decades and today forms the largest congregation of snake charmers in the city. The colony was a regular stop for tourist buses not long ago. The sight of deadly cobras undulating to the music of the flute would excite the tourists to no end. But today the people here will not even admit they keep snakes.

The sapera community belongs to the kalbeliya tribe of Rajasthan. The word kalbeliya refers to one who catches kal (black) objects, i.e. snakes. The community in Delhi is believed to have fled Rajasthan due to a severe drought. To impress gullible tourists they sometimes claim to have been residing in the city since the days of Mughal rule. However, knowledgeable elders vouch that the tribe moved to Delhi around 1918.

The sapera community's profession and image received a dramatic boost after independence. Foreign tourists helped enhance their economic and social status. The snake charmers would stand outside star hotels to attract the attention of guests. Even today some of their flutes bear the dimes and nickels showered on them by enthralled foreigners. As a result of such interactions, many snake charmers were invited to perform abroad. This was the golden period for this community, remnants of which can be seen in the form of the fancy phones and fridges that still adorn their houses.

The good times did not last long. India's dwindling wildlife and growing conservaton movement led to the passage of the Wildlife Protection Act in 1972. The basti felt its impact more than twenty years later when it became the target of a massive raid that changed the outlook of the community. The snake charmers today are hostile towards outsiders and extremely worried about the future of their profession.

Over the centuries, the community has evolved an entire culture around snakes. Snake charming is thus not a mere occupation but a way of life. Conventions are followed right from trapping of the snake to its release. The sapera is considered by some to be a jogi (holy man) for his ability to tame the revered snakes which are thought to be divine incarnations.

Snakes are generally caught in the rainy season and the snake charmers travel all over the country to catch their prey. The captured snake is brought home and a pooja (worship ritual) is performed in which the sapera vows to release the snake at an appointed date. The snake is treated like a pet, fed and kept warm. The sapera knows that the body temperature of the snake must be kept low. So in summer he liberally sprays water on the snake to keep it cool and in winter, offers his own bed to keep it warm. If a snake falls ill the sapera prepares his own traditional medicine to cure the invalid reptile.

Nagpanchami and Googhanaomi are festivals of special significance to this community. On these days prayers are offered to the snakes and some are even set free. But the sapera's relationship with his pet is one of contradiction. Though he literally worships the snake, he does so after seizing it from its habitat, removing its natural defences and confining it to a small basket. The sapera ardently believes that the attention and care he lavishes on the snake more than makes up for any damage caused.

The venom extracted from snakes is used to make surma or eyeliner. The general absence of eye disease in the community is attributed to the medicinal powers of this surma. An interesting research subject indeed. The traditional sapera can identify the type of snake involved by just looking at a snakebite and can also decide whether it is poisonous or not. He makes his own medicine for curing snakebites. The trained sapera is at home in the jungle too and possesses great knowledge of forest herbs and trees that helps him prepare medicines for treating common illnesses. He can also identify animals and snakes by their tracks.

But his traditional way of life is under grave threat today. Thanks to the law, the sapera is no longer proud of his profession. This change in attitude is the result of a series of raids and seizures of their snakes by enforcement authorities.

As a result of such raids the younger members of the community do not consider their traditional occupation respectable any more and many refer to it as "begging". These youth do not have the same expertise in handling snakes as their elders nor are they as knowledgeable about forests, herbs or wildlife.

The present plight and future survival of this community is polarised by differing camps, each championing its own just cause. First there are the proponents of conservation who argue that snake species are dwindling in the wild. Human rights activists aver that the snake charmers should be left free to pursue their traditional profession, while their animal rights counterparts complain that the sapera causes untold misery to snakes by removing their fangs or blocking their venom ducts, through extremely crude 'operations'.

Clearly, a compromise needs to be reached. The community offers a promising solution: "Allow one person from each family to continue this tradition while the rest look for other jobs." The Delhi Zoo employs snake charmers to man its Reptile House. As traditional snake charmers are comfortable handling most animals, they could easily be employed in zoos across the country. The community can also be organised to catch snakes that get stranded in colonies or farmhouses. The natural musical talents of the community could be tapped to help earn them sustainable livelihoods and to preserve their cultural treasures.

The Wildlife Trust of India (wti) is actively involved in rehabilitating the sapera community. It arranges regular performances at public functions and provides access to financial schemes to pursue alternative livelihoods. The wti also helps the community market their musical instruments.