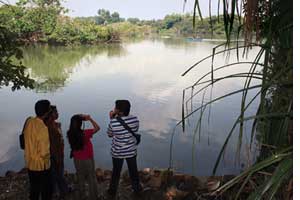 If there is a neem or jamun tree in your backyard, check it regularly and note down when they flower and fruit. You may soon realise you are collecting data for scientific research.

The National Centre for Biological Sciences (NCBS), a research body in Bengaluru, plans to rope in people for creating an online database on the lifecycle of various plant species across the country and on the influence of climate change on them.

The database is important as India has several climatic zones and biodiversity.

But there is no collection of information showing when a particular plant species flowers and fruits in a specific location, said the researchers preparing the database, SeasonWatch. The website can be accessed by March. “Our aim is to take science out of classrooms and labs,” said Suhel Quader, a research fellow at NCBS.  SeasonWatch is the brainchild of Quader. “People are usually passive consumers of information. We want to motivate them to observe nature and understand it. This is fundamental to understanding issues like climate change,” he said. Quader believes the database would also help in combating climate change.

What prompted him to involve people in building a scientific database? Anyone can contribute to scientific knowledge; it is not the preserve of scientists, said Quader. “The idea hit me while working with the Royal Society for the Protection of Birds.” The largest wildlife conservation charity in Europe has a system of collecting information on birds through volunteers. “On returning to India, I kicked the idea around. My colleagues at NCBS appreciated it.” They prepared a project, MigrantWatch, to track the arrival of migratory birds in the country.

Project MigrantWatch went online in August 2007, and has since drawn the attention of more than 1,000 birdwatchers across the country who have been sending data (see box). The success inspired the group to expand their database on nature using similar models and they chose to follow the plant lifecycle.

MigrantWatch has its limitation because most bird enthusiasts are clustered in urban areas, said Uttara Mendiratta, coordinator of the project. Since the database depends on their sightings, information on migratory birds from a large part of the country, particularly rural areas, remains unreported. Unlike MigrantWatch, SeasonWatch will appeal to a wider cross-section of people, from gardeners to regular walkers, she said. Mendiratta believes the project would also strengthen the database of traditional knowledge associated with plants.

People who want to contribute information to SeasonWatch would have to monitor particular trees in their neighbourhood or in the park they visit.

The website has a list of trees to choose from. Participants would check the trees every week or once in two weeks and note down the presence of buds, flowers, unripe and ripe fruits, and young and mature leaves. They would have to create a log-in account to feed the data, including the date and location details, online.

The information would generate a continuous record across the country and help understand the regional variations in flowering and fruiting time for a particular plant species, said Quader. This is important as the current information on phenology (the study of climate’s effect on the activity of plants and animals) is too general for India. The information, when correlated with data like the rainfall, weather and altitude of a region, would reveal the influence of interannual climate variation on the plant lifecycle.

To ascertain the credibility of the data, participants would be encouraged to send photographs of the trees they track. This would also help avoid the risks involved in species identification, said Quader.

“If the data seems odd—such as a neem tree flowering in winters—we would ask the participant to take photographs of the flowers and leaves to confirm that the tree is just a strange individual bucking the norm.” Though errors are bound to creep in, the researchers believe it can be eliminated while analysing the data; information that does not follow the pattern will get discounted.

“Once the website is functional, anyone can download the data for free and analyse it; the database is under a creative commons licence,” said Quader.

The next step for NCBS researchers is to rope in students. The Central Board of Secondary Education mandates schools to offer a course in environment, in which students have to prepare projects. But very few teachers have the required skill or tools. To fill this gap, NCBS researchers are designing projects, similar to SeasonWatch and Migrant-Watch, for students.