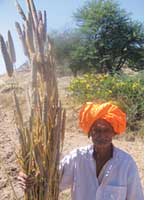 Dark brown seeds pointed at both ends resemble the kind of wild seeds growing just anywhere that children would collect to play with. Only, this seed is one of the rare and nutritious foods losing out to the rush for market food. To the Mahadeo Koli and Thakar tribals in the rain-shadow areas of Sahyadri hills, this millet is known as batu . The agriculture department of Ahmednagar district of Maharashtra has no records of this crop, and the local agriculture universities have not been able to put a scientific name to it.

The millet was well on its way to disappearing. Lok Panchayat, a local non-profit, stumbled on it last year in its efforts to conserve local crop and seed varieties. In the last 15 years, the non-profit has inspired tribal communities in 22 villages in Sangamner and Akole tehsils to conserve and revive cultivation of 120 varieties of local crops, including paddy, millets, beans, oilseeds and vegetables.


But, motivating the tribals was not simple.

“With increased water access, tribals abandoned local food crop patterns and converted to cash crops such as tomatoes and onions, and hybrid varieties of grains,” said Sarang Pande, head of the non-profit. “Within a couple of years, the two most important grain staples, a pearl millet variety called deothan bajra and several varieties of paddy including kalbhat, a fragrant and hardy variety with a blackish tint on the seed-coats, a ground-nut variety called khandya, and several bean varieties were on the verge of disappearance.”

It was difficult to convince the tribals of the need for conserving local food crops because they felt with money coming in from cash crops they could procure food easily from the market. “Cash rather than food had become their priority,” Pande said. Gradually though the tribals started realizing the hybrid varieties did not taste as good as the local varieties. People were also becoming aware of the loss in terms variety in food, and also of the growing health problems like fatigue and anemia that they had never faced earlier. But they were not prepared to relinquish their newly found cash-power.

The non-profit decided to try out the middle path: people continue to grow cash crops, but reserve some space for growing traditional crops for food.

Navnath Kale of Pukhri Baleshwar village in Sangamner was among the first farmers to put it into practice. Kale owns five hectares (ha), on which he grew onions, tomatoes and hybrid bajra. Six years ago, he reserved 0.4 ha for deothan bajra. The benefits started to show a year later.

“You just can’t compare the taste of deothan bajra to hybrid bajra. The appetites of the family improved, and minor but niggling health problems like fatigue, aches and pains, drowsiness and weakness disappeared,” Kale said. It is also a hardy crop and yields more fodder, which makes up for the lesser yield, he said. Kale later extended his food plot to 0.8 hectares, growing bajra and a variety of local beans including the disappearing local favourite hulga (horse gram). Several farmers in the village have followed Kale in the past two years.

In Shirpunje Khurd and Dhamanwan villages in Akole, farmers started with kalbhat paddy. “ Kalbhat yields marginally less,” said farmer Anjanabai Rengde of Dhamanwan, “but it is short duration, drought resistant and grows well even on inferior land without any chemical fertilizers. In the long run, it is the better option.” Farmer Sakharam Dindale shifted almost entirely to kalbhat . “In terms of paddy, hybrids do yield more, but if you husk it to rice, kalbhat is better because it has a thinner coat. Hundred kilogrammes of hybrid paddy yields about 50 kg of rice, but the same quantity of kalbhat paddy yields about 75 kg rice. It makes more economic sense."

But, more than finding willing farmers, looking for lost seeds was the greater challenge. Pande and team moved deeper into the interiors and Karewadi village proved a treasure house. “The women there introduced us to a variety of local millets that other villages had stopped cultivating, including batu,” Pande said. It was also in Karewadi Pande discovered tribals’ unique system of fasts. “Fast days are part of a cultural practice of nutritional gap-filling. Light, easy to digest millets like bhagar, rajgira, and batu and yams grown in marginal quantities, are reserved for consumption on fast days,” Pande said. Farmer Nanobai said bhagar calms the nerves, rajgira makes blood, and batu gives strength like no other grain does. “It is not good to eat them every day, but once in a while they are a must for good health,” she said.

Most farmers, despite awareness of nutritional benefits of traditional foods, have not stopped cultivating hybrids.

The why of it

Changing weather conditions and erratic rainfall are reasons farmers don’t cultivate just traditional varieties. “Most of the millets we grow have tall, delicate stalks, and thrive in prolonged spells of gentle rain,” said Tulsabai Lahange of Karwadi village. “Now rains are sudden and hard, and our crops either wither during the long gaps, or fall down during heavy rains,” she said. A single spell of rough rain can spoil hardy crops such as batu.

The khandya variety of groundnuts, known for high nutrition content and good price, has also been a victim of erratic rain. The crop, unlike other varieties of groundnuts, is water intensive and takes six months to mature. In the past two years, farmers in several villages grew this variety on two gunthas (0.02 ha) per family. “I have harvested two sacks of pods, about 75 kg, on my two gunthas, which is very good, but I have suffered more anxiety for these than for my entire 4 ha,” said farmer Maroti Barmate of Dhamanvan. Loss of village-level oil extraction infrastructure has also made people reluctant to cultivate oilseeds like khurasni (niger) and jawas (linseed).

Other reasons farmers are hesitating to cultivate these crops include loss of old skills required to grow a variety of crops and prepare them for consumption. “Most of the marginal crops cannot be stored in husked form or as flour, and this work has to be done manually before cooking. Most of the younger women don’t know these jobs. The younger men also resent having to care for a variety of crops,” said Kondiba Dhindale of Shirpunje Khurd village in Akole.

The most successful revival has happened in the case of deothan bajra and kalbhat paddy, both of which are hardy short duration crops that grow well on all kinds of soil and can withstand vagaries of rainfall.

Kalbhat also proved a commercial success after Lok Panchayat ran an awareness campaign regarding its qualities, and now commands a 10 per cent higher price than other varieties in the local market.

The non-profit has decided to apply for community patent for these two varieties under the Protection of Plant Variety and Farmers’ Rights Act. “We want that the patents for all the 120 local varieties of seeds should be registered in the name of the communities which have been conserving them for centuries,” said Pande. “There might be difficulties, but we will see.”