At Chandpur, about 150 km south of Dhaka, Anisur Rahman has a scientific explanation for the predicament of fisher people like Samaad.

Currently senior scientific officer at Bangladesh’s Fish Research Institute, Rahman explained, “In scientific parlance, the hilsa is an anadromous fish. It lives most of its lives in the sea but around the monsoon, when it is time to spawn, the hilsa swims against the tide and goes back to the river where its mother had given birth to it.” He added that the most delectable ones are those that go the farthest upriver. “But there is barely any hilsa left in the rivers,” Rahman said echoing the fishers of Barisal.

The scientist, who has been studying the movement pattern of the silvery fish for more than 20 years, said, “Earlier the hilsa would move from the Bay of Bengal to Bangladesh’s rivers, the Padma and the Meghna, for spawning. It would also take the western route to the Ganga. But Bangladesh’s rivers were known to be more abundant. Now there is more hilsa in the west, in areas bordering Indian waters,” Rahman said explaining why Bangladeshi fishermen have to go deep ocean. Dubo chars (submerged sand islands) have increased in the ocean near Bangladesh in the past ten years. The hilsa, which prefers unhindered migration, has swum away from waters under Bangladeshi control, Rahman said, adding there is little research on the proliferation of such submerged islands.

G C Halder, his colleague at the Bangladesh Fish Research Institute, cites a host of reasons for the declining catch. The Padma river, the source of the delectable hilsa, is getting drier by the year. When the Farakka Barrage was commissioned in northern Bengal in 1975, the water flow to the Padma was 65,000-70,000 cusecs during the dry season, April-July. An India-Bangladesh water treaty ensured a supply of more than 50,000 cusecs till the late 1980s. But the treaty was not renewed after 1988 and by the late 1990s the water flow to the Padma fell to around 30,000 cusecs during the dry season, Halder said citing documents of Bangladesh’s water department. That sounded the death knell of the sweet water hilsa. 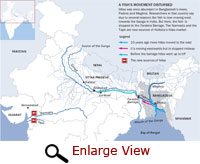 The barrage gets bad press from Indian scientists as well. Kolkata-based ecologist Parimal Ray is one of them. He does not agree with Rahman’s contention that there is more fish in Ganga in India, because the Farakka restricts its movement. Ray believes a proper fish pass could have made hilsa migration easy through the barrage. But today the area just below the barrage has become a point of indiscriminate fishing. “This never existed before the construction of Farakka. More than a thousand fishing boats are sometimes seen catching hilsa just below the barrage because it acts as an obstacle against the fish’s migration,” Ray wrote in his book, Ecological Imbalance of the Ganga River; its impact on Aquaculture. Before the barrage was constructed, the fish would swim upstream as far as Allahabad in Uttar Pradesh, Ray said.

In Bangladesh, Halder attributes the decline in hilsa numbers to the pollution in the Halda in Chittagong and rivers in Sylhet district. “Not just the hilsa. Rivers in Chittagong once boasted more than 70 fish varieties. Pollution by industries and dams restricting water flow mean there are hardly 10 varieties left,” his colleague Rahman said.

Rahman’s research led the Bangladesh government to impose a ban on jatka (juveniles) fishing between November and March. “In 2002, we realised Bangladesh could increase hilsa production by nearly 30,000 tonnes if fishermen stopped catching jatka,” he said. But the scientist refuses to take much credit for the idea. The suggestion was rooted in tradition, he explained. For Bengalis, the hilsa season began around March and ended in October. A theory has it that Bengalis strapped the ilish season with religion to prevent overfishing. “In the past, we never had ilish between Lakshmi Puja (mid- to end- October) and Saraswati Puja (early- to mid-February). The last ilish would be consumed after a pair of the fish was offered to the goddess on Lakshmi Puja. This bar timed with the period when juveniles swam back to the the sea from the river. It allowed the fish to grow large and procreate. Both Hindus and Muslims adhered to this abstention,” Rahman said.

Ratan Dutta, joint director at Bangladesh’s fisheries directorate, believes fishers in Bangladesh gave up on the tradition in the mid-1990s. “In mid-1990s, there was an influx of fine fishing nets from Thailand. Fish net manufacturers took to nets with a mesh of 1.5-2 inches (38-51 mm) with alacrity. They were perfect to catch juveniles; even children could use them. We gave a local name for the nets, current jaal. Factories mushroomed in Dhaka’s outskirts,” Dutta said.

The factories were banned in 1999 but they continue with impunity, the fisheries official said. “They are patronised by powerful people,” Syeda Rizwana of the Bangladesh Environmental Lawyers Association said. Rahman though believes that the ban on jatka fishing is working. The catch has increased by nearly 6,000 tonnes. But he also said that fishermen net 10,000 to 15,000 tonnes of jatka a year. Vendors carrying basketfuls of wan and thin ilish at Dhaka’s Karawan Fish Market prove him right. The fish sells for Tk 150.

Juvenile hilsa is good business across the border as well: people in West Bengal call it khoka ilish. In 2006, the state’s government banned the catch of hilsa weighing less than 500 grammes. The state’s fisheries minister Kiranmoy Nanda claimed, “Our officials raid wholesale markets.” But an official of the department, who did not want to be named, said, “The khoka, priced at around Rs 250 a kg is the only ilish that common people can afford; that fuels illegal fishing. In 2006, the fisheries department decided that teams would raid markets at regular intervals but nothing came of it.”

Sarbani Basu, a Kolkata school teacher, does not mind the khoka ilish. “It tastes sweeter than Gujarat ilish.” Her sister, Jayanti, though gets nostalgic about the days when Bangladeshi hilsa was a feature of a monsoon day meal. 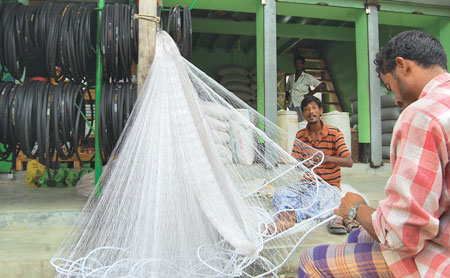