But will there be a place for traditional institutions in modern local self-governance? 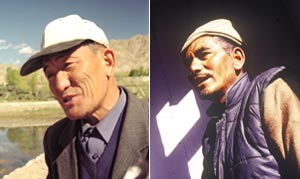 It is widely accepted that panchayati raj is shaping up much better in Leh as compared to other districts of J&K. The first real panchayat elections in the state were held only in May 2001. Even then, modalities of decentralisation of power to elected village representatives were not issued. After coming to power in 2002, the new government under the People's Democratic Party and the Congress has got serious about panchayats. In June 2003, it issued orders transferring 15 subjects related to developmental activities to the panchayats. On a recent visit to Leh, the chief minister Mufti Mohammed Sayeed promised to transfer funds and functionaries to the panchayats within one year. But local self-governance in Leh has some peculiarities.


Buddhist or Muslim, Ladakhi society is essentially tribal. The goba -- or the village head -- is elected through democratic consensus and can also be removed by the village at will. Regardless of religion, this headman has a significant social role in the village. When the Dogras of Jammu conquered Ladakh in the mid-nineteenth century, they made the goba the village revenue collector (nambardar) of the village. After 1947, the Indian government continued with this arrangement. But the goba's salary today remains a paltry Rs 2.5 per day. Moreover, as the PDS chipped away at Ladakh's traditional agriculture, the institution of goba -- so integrally woven into the region's agrarian system (for example, the traditional irrigation manager, churpun works directly under the goba) -- also diminished in importance. Today, the position is deemed a great burden and there are several villages where families are impelled to take turns to provide a goba. Haji Mirza Maidi, goba of village Chuchot-Yokma since 1989, says he has continued this long only because of pressure from his villagers. He has not received his revenue official's salary for five years now.

The panchayati raj in Ladakh further eroded the goba's traditional powers. The panchayat is in charge of all development works in the village and J&K has a provision for panchayat adalats (courts). But, the goba still retains vestiges of traditional power. Maidi, for example, says that several people still call upon him for settling disputes. But as long as he is a revenue official, he cannot contest the panchayat elections. This has created several conflicts. For example, selecting economically backward people of the village for government schemes (such as the Indira Awas Yojana to make houses for the homeless) was the goba's job earlier. It is now the panchayat's responsibility. People who feel aggrieved go to one institution or the other. In a society that runs on popular consensus, such divisions can seriously hamper decentralised governance.


The goba's role as the nambardar creates problems in the headman finding a place in the panchayati system. Tsewang Dorji, former assistant commissioner of Leh, who has worked his way up from the post of tehsildar and is well acquainted with revenue-related work, says: "Taking away the nambardar's post fromthe goba would open the possibility of aligning the headman's position with that of the sarpanch." This would probably require an amendment to the Panchayat Raj act of J&K.

"Till that happens, the goba can be made a special invitee at all the panchayat meetings," says Ghulam Mohammed Sheikh of the Leh Development Organisation, which has a programme for supporting panchayats. Wherever the goba and the sarpanch have worked closely, village governance has been successful. Sheikh also points to anomalies and possible legal glitches in the way Ladakh is implementing panchayati raj. For example, after LAHDC's creation in 1995, it was decided that it would function as the district planning and development board (or the zilla panchayat) whenever panchayati raj is implemented. But the 1989 Panchayati Raj act does not mention the LAHDC. This has created a possibility of a conflict, though this can ocur only when the second of the three tiers of panchayati raj, the block develoment committees are created. This is yet to happen in Ladakh. But, possibilities of future conflict do exist.

A way out of this mess, though remote, could be notifying Ladakh as a Scheduled Area under the Fifth or the Sixth schedule of the constitution. It can then avail the greater potential these constitutional instruments offer for self-rule. But Sheikh, one of the best informed people on panchayati raj in Ladakh, says there has been no serious discussion amongst Ladakhi leadership about demanding scheduled area status and there is no popular political consensus on this.