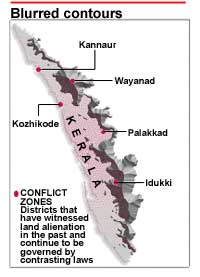 The festivities of January 1, 2002, signified the sealing of a pact between the Kerala government and the Adivasi Dalit Samara Samithi (agitation council) on October 16, 2001. The agreement guarantees allotment of one to five acres (around .5-2 hectares) of land to all landless tribal families in the state and implementation of a development support scheme for them over the next five years. For the present, the tribal body has taken the authorities at their word and suspended its 48-day struggle.

However, even before it has got off the starting block, the trdm is mired in a controversy over the status of the land being given. Top officials of the Kerala Forest Department (kfd) dub it as yet another betrayal of adivasis because they are being promised forestland and uncultivable tracts. It is felt that the tribal communities may soon have to vacate many of these plots, either for want of legal clearance or on account of crop failure. Then there is the spin the government's give-and-take approach has imparted to the issue. Most of the tracts identified so far are ecologically fragile and as per a legislation that is awaiting clearance, all such areas will be deemed fit to be vested. The authorities may, therefore, end up reclaiming the very land they have handed over to the indigenous people.

The master plan document lists forests mainly as a means for resource extraction and all natural forests (50 per cent of the total woodland) are set to be clubbed under the Participatory Forest Management (pfm) programme. Consequently, the tribal people will be saddled with additional responsibilities in terms of operating in non-intervention zones (gene pool reserves) and non-timber forest produce (ntfp) areas. A history of hostility between the tribal communities and the kfd could also have a bearing on the future of the scheme.
While the government had initially claimed that there were 11,000 landless tribal families, a trdm team has put the number at 53,472. To honour its promise the administration, therefore, needs over 53,000 acres (more than 21,448 hectares) of cultivable land. By November 2001, officials had identified around 14,569 hectares (ha). But the bulk of it is vested forestland. Assigning such tracts for private ownership is not permissible under the Forest Conservation Act (fca), 1980.

Ironically, the provision in a 1971 Act passed by the state to assign 23,058.63 ha of vested forestland to tribal families for cultivation was not implemented. Had this been done prior to the tightening of forest laws in 1980, the issue would have been resolved decades ago without snowballing into the ongoing social conflict, feel members of the agitation council led by C K Janu.

There is also the question of the current ownership of land. "We have records to prove that the tracts for which title deeds have been given are revenue lands," says the district collector of Idukki. Though this contention has been challenged by the kfd there are many who believe that there is a tacit understanding between the forest department and revenue officials to protect the interests of the land mafia in the state. Incidentally, voluntary organisation Thiruvankulam Nature Lovers' Movement has moved court against the revenue department claim.

A recent report of the Legislative Committee on Government Assurances (1998-2000), chaired by legislator Izhaq Kurikkal, reveals that Tata Tea Limited alone holds over 20,234 ha of illegal forestland in Idukki. Whereas such lands have been excluded, even steep forest hill slopes such as those at Mankulam (8094 ha) have been included in the master plan for handing over to adivasis (see map: Blurred contours). Nalla Thambi Thera, an activist and non-adivasi doctor practising in Wayanad, points out that the land earmarked in the Marayoor and Kundala areas of Idukki district is uninhabitable.

Sources hint at a conscious effort on the part of the authorities to avoid touching high-value revenue properties under the control of the rich and the influential. In fact, state forests minister K Sudhakaran has admitted to a nexus between officials, government pleaders and the land mafia.

The revenue and forest departments are now carrying out a joint survey. "We have sought the Union government's permission to clear 10,117 ha of vested forestland," says the chief minister. "Legal means will be found to distribute land to the poor tribal communities," he adds (see box: Natives turn restive). But the general feeling is that this would be an extremely difficult task. Even advocate general M Ratna Singh is understood to have advised the administration against carrying out the exercise in its present form, warning that any such attempt would "unduly expose government officials to punishment under section 3 (b) of the fca".

Meanwhile, the adivasis find themselves precariously perched between conflicting claims; they are hopeful but their patience is wearing thin. "Whatever be the obstacles and persuasions, we are now determined not to give up the promised land," says Ashokan, a tribal youth from Marayoor, stridently.
Last August, when they set up 'refugee camps' in front of the state secretariat in Thiruvananthapuram as a part of their agitation, the adivasi body had argued that out of 3.2 lakh tribals in Kerala, nearly 90 per cent (45,000 families) were landless. This factor, coupled with unemployment, has led to over 30 starvation deaths.

In the past, successive governments in Kerala have been only too willing to grant title deeds for all available tribal tracts or forestland. Settlers and encroachers have made the most of the turbulent 'grow more food' campaign years as well as the present era of ecotourism. In the process, the adivasis and the forests on which they depend for survival have been the twin casualty.

Unfortunately, the tribals' 25-year-long protracted legal battle for restoration of alienated tribal lands has not brought justice to them (see box: Lost ground ). In the Attappady tribal block of Palakkad district, the tribal population was 64 per cent in 1961. By 1991, it was reduced to just 30 per cent and the forest cover had diminished to about 40 per cent.

Ditto Wayanad. At the start of the century, 90 per cent of the population of the thickly forested district comprised scheduled tribes (sts). The trdm now estimates the number of absolutely landless tribal families in Wayanad to be 14,031 and those in possession of less than one acre (less than .5 ha) another 12,184. A recent World Bank report said that 80,590 ha of tribal lands were alienated in the state until 1996. Currently, only 23 per cent of the tribal population lives within forests.

On October 15, 1993, the Kerala High Court (hc) passed an order on a public interest litigation (pil) filed in 1988 by Thera, directing the government to dispose of applications for restoration of alienated tribal lands within six months. The government, however, kept employing dilatory tactics.

Political parties instigated large-scale encroachers and smaller settlers to put up resistance. But when the hc did not buy their arguments, the government tried to push through an ordinance. On two occasions, the state governor shot down the amendments. Later, president K R Narayanan returned an Act passed by the Kerala government. The aborted ordinances as well as the amendment Act of 1996 were said to be a bid to subvert the restoration of alienated lands.

According to Thomas Isaac, the chief architect of the decentralised 'People's Plan', land reforms in Kerala have "transferred agricultural land from landlords to tenants, provided house sites for agricultural labourers, raised the incomes of farmers and the bargaining power of labourers". But at the same time the reforms have bypassed tribal communities, on the contrary, working as a catalyst in further usurpation of their lands. According to the Legislative Committee on Government Assurances, encroachers had usurped 28,588 ha of forestland in the state by 1977. But in 1993 the government regularised all encroachments before 1977.

To be sure, previous political movements for land rights have at best been sporadic and were all contained by dangling a carrot or wielding the stick. This time the agitation council contended that the due process of law (involving cumbersome procedures for submitting and substantiating land claims) benefits only a few thousand adivasis . It, therefore, forced the authorities to accord priority to the rehabilitation issue in the 10th Five-Year Plan and won the space to have a say in the formation of the master plan.


A master plan with its thrust on ensuring scientific cultivation practices and provision of need-based livelihood support systems over the next five years is a major plank of the mission. From preparing land-use plans to the implementation of development activities, district and site-level officers and tribal promoters are expected to work in tandem with the user groups, Oorukoottam -- the congregation of all adult members in a tribal hamlet.

The government has given an assurance that the Assembly would request the president to declare tribal tracts as Scheduled Areas under Schedule V of the Constitution. The agitation council had made this demand in order to ensure that further alienation of tribal lands did not occur and that the Oorukoottam would have the final say in all matters of development.

But here, too, a questionable provision exists. From now onwards government departments will formulate schemes, marking a significant departure from the decentralised plan hitherto implemented through panchayats (see Down To Earth , Vol 9, No 4, July 15, 2000).

The move to pump large sums of money into the project could be the immediate inducement for this change. While Rs 540 crore will be made available for the trdm during the 10th Five-Year Plan period, more funds would be invested by the Union government, general sector and other institutions.

It is a matter of concern that many areas may even be unfit for continuous cultivation of crops. "The Oorukoottam and the experts will jointly select the crops," says Murugesan, a tribal who has opted to settle in Marayoor. As of now, the choice of the adivasis is limited to tapioca, pepper, ginger grass and other such crops that could either promote soil erosion or that have slumped heavily in the market. "We should be suggesting a range of mixed seasonal and perennial crops in order to minimise risks," avers Surendran, member (agriculture), trdm. Another discrepancy is that though the title deeds lay emphasis on conservation of valua-ble trees in the lands being assigned, the list of trees to be protected has not been prepared.

The formation of Vana Samrakshana Samithis (vss), the unit with powers to handle pfm funds and carry out the tasks of conservation and collection of ntfp, has met with resistance from the Scheduled Tribe Cooperative Societies that now carry out ntfp extraction. "The conflict was misguided. But there are no soft options left," says P N Unnikrishnan, chief conservator of forests in charge of pfm.

A major task ahead of the mission would be to ensure that short-term goals and land utilisation schemes do not obfuscate the long-term sustainability of the project. Otherwise, like its predecessors, the A K Antony dispensation too would be seen to have led the tribal communities a merry dance.

With inputs from Lian Chawii and Richard Mahapatra