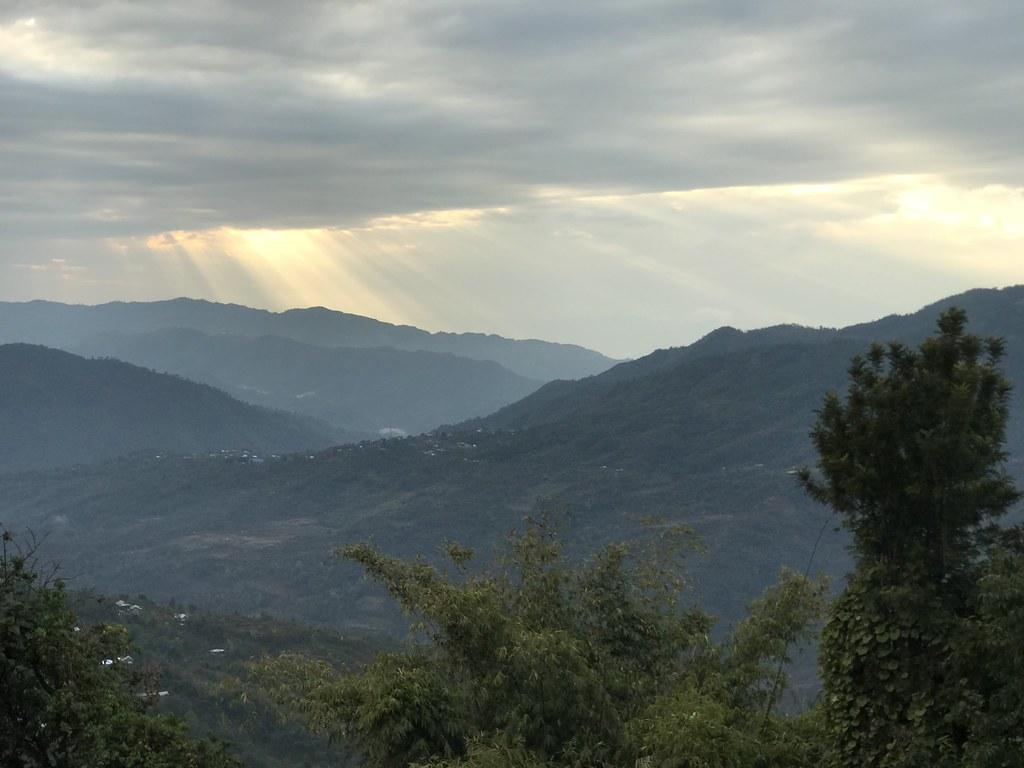 In the first part of the series tracking climate change in North East India, Down to Earth traced changing rainfall patterns over the region in the last century that have resulted in its overall drying up.

The North East India, which normally receives heavy rainfall during the monsoon months (June-September), has changed character for the worse. The flood-drought cycle now has begun to happen within a year, especially during the monsoon. The rains come in quick bursts and flood the region, followed by elongated dry periods that border on drought.

DTE analyses the geography of the eight northeastern states and what changing climate and rainfall patterns have meant for the region.

The state is divided into three distinct geographical regions. To the north is the Brahmaputra river valley at the foothills of the Himalayas; to the south is the Barak river valley. In between the two valleys are Karbi Anglong and Cachar hills.

Monsoon rainfall in the state showed a declining trend between 1989 and 2018. Several years in the last two decades had deficit rainfall, below the long period average (LPA) of 1,486 millimetres.

The state receives its maximum rainfall in July, with 21 per cent variability in rainfall in the last 30 years. Overall monsoon rainfall variation in the period was close to 13 per cent.

A district-level analysis presented a different scenario, where the dry drought-like districts were intermixed with floods due to rainfall in other districts. Most districts to the north of the Brahmaputra, such as Barpeta, Sonitpur, Lakhimpur and Nalbari, showed an increasing trend in rainfall, according to data by the India Meteorological Department (IMD).

These districts also host all tributaries of the Brahmaputra that flow down from the high Himalayan mountains in Arunachal Pradesh to join the Brahmaputra. The change in geography from the mountains to the plains is abrupt and steep, which makes the region naturally prone to flooding as well.

An increase in rainfall means tributaries get flooded more often, thereby increasing the chances of floods in these districts and those in the south of the Brahmaputra, where the rainfall trends were on the decline.

The number of rainy days decreased in most districts to the north of the Brahmaputra. This means that increased rainfall now happens over fewer days, increasing chances of river flooding.

In several districts to the south of the Brahmaputra, tributaries come in from other states where flooding mostly happens due to heavy rainfall elsewhere. Golaghat district — home to the Kaziranga National Park famous for one-horned rhino, Bengal Tiger and Asiatic elephant — often gets flooded due to the Doyang river that flows in from Nagaland’s Wokha district.

The state has a significant forest cover of 82 per cent. It is mostly mountainous, and the only plains are in a thin band of land at the foothills bordering Assam.

The forests cover the high hills in the south; snow covers the Himalayas to the north. All major tributaries of the Brahmaputra — like the Siang, Dibang, Subansiri and Lohit — come down from the mountains and fall into the plains of Assam at a steep gradient, making them prone to flooding.

Between 1989 and 2018, monsoon rainfall showed a significant decreasing trend, with many years experiencing deficit rainfall below the LPA for monsoon period of 1,726 mm.

The state received its maximum rainfall in July when it showed a high variability of 31 per cent. The overall variability of monsoon rainfall for the period was also much higher than for Assam: 21.7 per cent.

The increased flooding observed in these rivers may be due to an increase in rainfall. Upper Siang shows a significant decreasing trend in the number of rainy days, which translates to more rainfall over fewer days.

These springs and streams are the primary source of water for most villages nestled in the hills and mountains. They later join the tributaries of the Brahmaputra.

The state is mostly hilly with plains limited to a small portion bordering Assam. The state is drained by four major rivers and dozens of minor rivers and tributaries. Dhansiri, Doyang and Dikhu flow northward, down from the Naga hills into the Brahmaputra in Assam; the Tizu flows east towards Myanmar.

Between 1989 and 2018, the state showed a significant decreasing trend in monsoon rainfall. It received less than normal rainfall of 1,143 mm for several years. July received the maximum rainfall in the 30-year period with a variability of almost 30 per cent. The overall monsoon rainfall variation was also high at 24.5 per cent.

Of the 11 districts in the state, seven show a decreasing trend in monsoon rainfall while four districts show an increasing trend. Out of the seven districts where there has been less rainfall five show a significant trend.

The gradient of the rivers is not as steep as it is in Arunachal Pradesh, hence the rivers are not as prone to flooding. But recent instance of heavy rainfall events have brought floods to places that had not witnessed the calamity in decades.

Flooding in Wokha district in 2018 is an example. Phek district towards the south of the state showed an overall increase in monsoon rainfall; the number of rainy and heavy rainfall days also increased.

The state is mostly mountainous with high hills, covered with evergreen forests in the south, and snow-capped Himalayan mountains towards the north.

Teesta is the major river flowing through the state. It flows down into West Bengal before entering Bangladesh.

Between 1989 and 2018, the state showed a slight increasing trend in monsoon rainfall with the LPA of 1,609 mm. July received the maximum rainfall with a variability of 23 per cent. The overall monsoon variation was higher than that of Assam, which seems to be the most affected by the changing patterns of the monsoon rainfall in the 30-year period.

The district analysis showed a sharp contrast between the northern and southern parts of the state. Of four districts, the three towards the south — East Sikkim, West Sikkim and South Sikkim — showed a decreasing trend in the monsoon rainfall.

The trend is significant in South and West Sikkim. North Sikkim showed an increasing trend in monsoon rainfall, which may be causing an increase in flooding in the Teesta. This may have led to landslides downstream in South Sikkim, especially around Gangtok, a phenomenon that has been observed since 1997.

In fact, Gangtok became only the second place in the country to get a landslide early warning system in 2018 after Munnar in Kerala.

Only 10 per cent of Manipur is a valley while the rest is hills, divided between the eastern and western hills. Around a fourth of the valley area is covered with lakes, wetlands, barren lands and small hillocks, which leaves a small area for agriculture.

The hills are either not cultivated much or people practice shifting jhum cultivation that is not very productive. The total area under cultivation is 7.4 per cent. Around 67 per cent of the population of the valley is engaged in agriculture, which puts extreme pressure on a small region to feed its entire population.

IMD’s 30 years analysis does not provide data or trends for the state of Manipur. In its overall countrywide statement regarding the analysis, the weather agency mentions the state just once; between 1989 and 2018, the state witnessed a significant increasing trend in heavy rainfall days.

From 1950-2010, July received the maximum average rainfall in the state which was close to 300 mm, according to a 2018 research paper. It also had the maximum variation of around 25 per cent. The paper found a decreasing trend in the intensity of July rainfall.

Another 2016 study by researchers from the Central Agricultural University, Imphal, found that between 1975 and 2007, there were 18 years of mild drought and one year of moderate drought in 1979.

In 2009, Manipur faced a severe drought. Nearly 46 per cent of the country faced moderate-severe drought then after a highly deficient monsoon. In 2019, Manipur experienced a humongous rain deficit of 56 per cent.

Four districts had large deficient rainfall (deficit greater than 60 per cent below LPA) for the season with a high of 82 per cent deficit in Chandel district.

Four other districts had deficient rainfall (deficit between 20 per cent and 59 per cent below LPA) and one had normal rainfall. The trend continued in 2020, with the state again facing a dry monsoon season with a high deficit of 46 per cent below LPA.

The 2021 season is no better: There was a deficit of 57 per cent (till August 8) in two months. The CAU paper concluded that the decreasing rainfall trends in the state have affected agriculture productivity, especially cultivation of paddy as well as pisciculture.

The state receives 71 per cent of its annual rainfall during the monsoon months. It has mostly hilly terrain with elevations with Khasi hills in centre, Jaintia hills in the east and Garo hills in west and some plain areas of low elevation.

The state has physiographic variation with hills and plants / trees in the northern and western parts; in the south, the slopes are steep and regular with dense forest.

In the 30-year period between 1989 and 2018, the state showed a decreasing trend in the overall rainfall, which got pronounced 2005 onwards.

Yet, East Khasi Hills, the wettest district in the state, saw an increasing rainfall trend, even though it has not been significant. The district has flat-topped hills and several rivers, and has seen significant decrease in the number of rainy days.

Meanwhile, four districts on the east and the west borders saw a significant decrease in rainfall over the period. These districts also recorded a drop in the number of rainy days.

The unpredictability of the region can be guaged from the fact that the rainfall in July, the wettest month in the state, had a variability of 40 per cent.

While the overall rainfall in the 30 years has remained constant, with a minor increase in a month-on-month analysis, the region has seen a substantial drop in the number of rainy days.

This has been accompanied with a substantial increase in heavy rainfall days. The region receives 67 per cent of its annual rainfall during the monsoon months.

Tripura is a landlocked state with small hills and low-lying land with numerous deep rivers and valleys. The hills of the state run from north to south and parallel to one another till they disappear in the plains of Bangladesh.

The hills are mostly of low elevation and are covered by thick forests.

The state has seen a decreasing trend over the 30 years, though it is not significant. The unique challenge, though, is that all districts now receive less overall rains during the monsoon season, which accounts for 60 per cent of its annual rains.

South Tripura, which is the wettest district, with an average annual monsoon rainfall of 1,549 mm, has seen a substantial drop in the number of rainy days and heavy rain events.