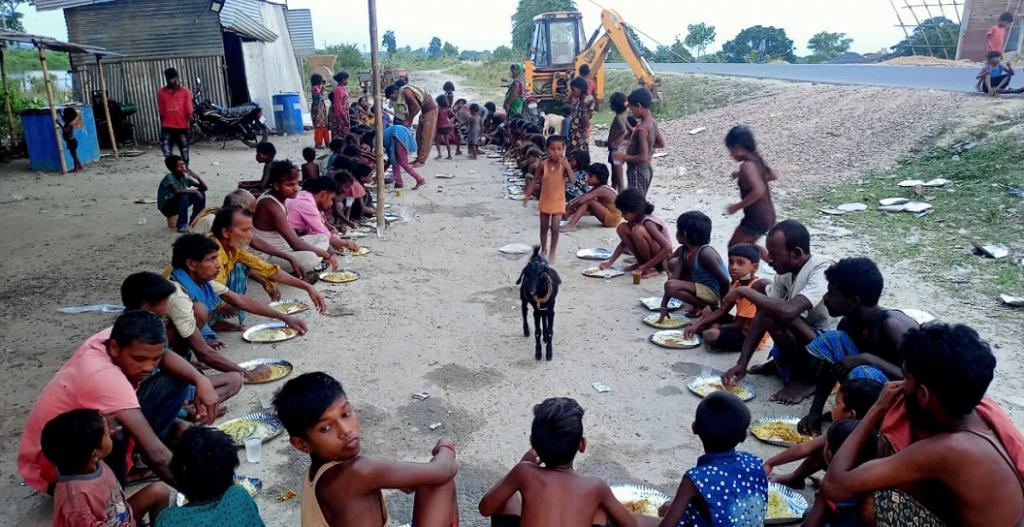 Hundreds of families displaced by floods that took place in June in northern Bihar, have been forced to take shelter on nearby roads.

Large tracts of land are still submerged by flood waters and there is little chance of water receding in the coming days.

The India Meteorological Department has forecast more rains this month due to which the flood situation is expected to worsen. All major rivers including the Bagmati, Koshi, Kamla Balan, Lakhadei and Bhuthi Balan are in spate due to heavy rains.

“We have been living on the roads along with others displaced by floods. Initially, when we were displaced in the third week of June, we had adequate food grains with us. But now, we only have dry flattened rice, salt and jaggery. Lack of clean drinking water, lack of boat and toilet have created problems for us,” Ramesh Sahni, a marginal farmer, said.

Sahni and others, from Sugauli block in East Champaran district, have erected temporary shelters with tarpaulin sheets. These are spread out in a stretch for nearly two kilometres.

Mohammed Alauddin said flood victims had not only erected their makeshift shelters on roads but also near railway tracks.

“There was no other option. We were full of fear during dark nights, without any light, expecting attacks by snakes, scorpions and wild dogs,” he said.

Sugauli Block Development Officer Saroj Baitha said the early floods in June were unexpected. However, government agencies had been trying to provide help and reach out to displaced flood victims. He admitted that hundreds of people were stranded in marooned villages.

Amar, a social activist at Mehsi in Champaran said flood victim families were taking shelter on the roadside, embankments and other high places. They were spending the night in the dark under the open sky along with cattle.

“Lack of community toilets, clean drinking water, lighting as well as privacy for adolescent girls and women and nutritional care of children and the elderly are major problems concerning the flood victims,” he said.

According to Amar, nearly 500 families belonging to over a dozen villages have been living on roads, without any government help or relief in Sugauli.

More than 150 villages in 65 panchayats under ten blocks of East Champaran district have been badly affected by floods.

The rising water level of the Gandak river and its tributaries have wreaked havoc on people’s lives, who have either fled or are still fleeing for safety. Nearly 700,000 people have been hit by floods.

Government agencies are yet to release data related to the number of villages and people affected and displaced by floods. There is virtually no official daily update on the flood situation and victims in the state, except for the rising water level of rivers and rainfall forecast.

Bihar is not new to floods. But it was taken by surprise by the amount of rainfall it received within a week after the monsoon entered in June. Heavy rainfall in the state is normal during July and August.

After the monsoon arrived in Bihar this year, the state has received surplus rainfall so far, which is more than normal. This has resulted in floods in the low-lying areas.

Unexpected surplus rainfall in the state has also created problems for farmers as their paddy seedlings were damaged at many places because of waterlogging in the fields. It was reported that the standing summer maize crop was also damaged due to heavy rainfall June.

According to the Water Resources Department’s website, Bihar is the most flood-affected state in India. It accounts for close to 17.2 per cent of the total flood-prone area in the country.