North India rains: Crops ruined in Uttar Pradesh; over half a million affected by floods

Rains in India’s largest state have ruined crops such as paddy; sugarcane; mustard; potatoes and other vegetables 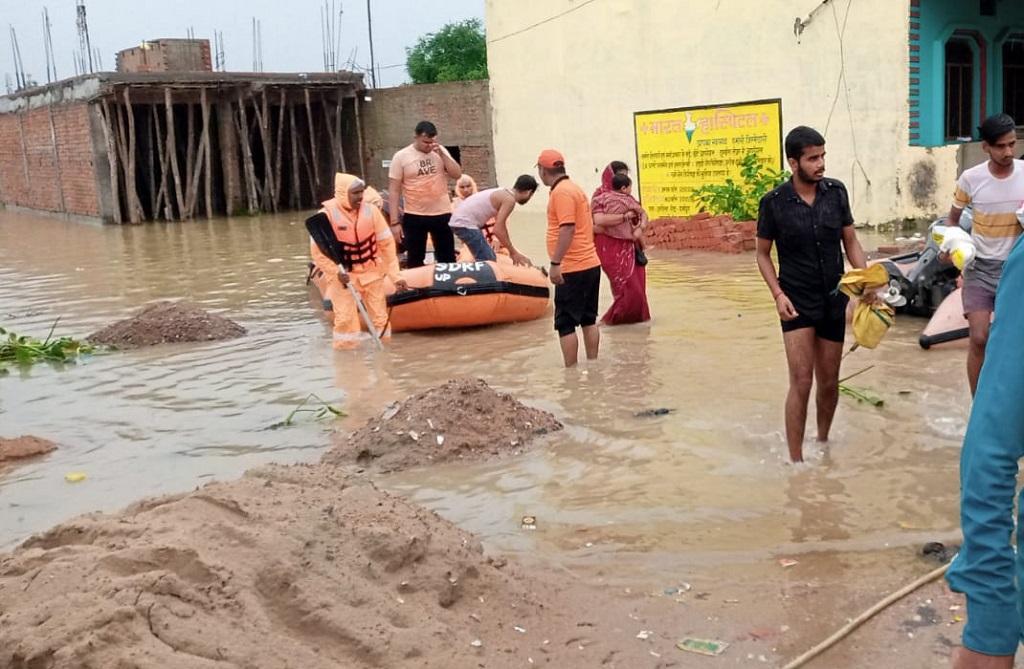 The UP SDRF rescuing flood-affected people in Balrampur. Photo: twitter@sdrf_up

Farmers in Uttar Pradesh have been hit by a double whammy this kharif season. The state was headed towards drought in July. Now, continuous rain since October 5, 2022 has damaged crops which had been thirsty in three months ago.

“Wheat sowing is getting delayed. This will hurt farmers further,” Sethpal Singh, a farmer from Nandifirozpur village, nine km from Saharanpur district headquarters, told Down To Earth.

He added that nobody was taking calls at the office of the Pradhan Mantri Fasal Bima Yojana.

Singh said farmers had been affected due to heavy rains twice in the last two months. First there was continuous rain from September 15-20, followed by the rain that started from October 5.

“I had planted vegetables like radish, bottle gourd, ridge gourd and cauliflower in about 2 hectares of land. They have been damaged. There has been a loss of Rs 2 to 3 lakh,” Singh said. Radish, which was selling Rs 45 per kilogram, is now being sold at Rs 22 per kg.

Anil Yadav, a farmer based in Risia, Bahraich district, said, “It did not rain when it was needed. Now, it has rained such that my entire field has been destroyed.” Jokhan from Shravasti district told DTE that water collected in his fields was still to drain out. “The ears of paddy have been completely spoiled,” he said.

The rain has also ruined the farmers’ plans to plant potatoes and mustard this season.

Some 96 per cent of paddy was sown till August 20, according to state government data. But the possibility of lower crop yields had already been predicted due to drought.

It rained all over India’s largest state in these past few days. Almost the entire state has received (and continues to receive) excess rainfall, with the exception of seven districts, according to data released by the India Meteorological Department (IMD) October 10.

Rivers like Ghaghra, Sharda and Rapti, the major tributaries of the Ganga, are in spate. The districts of eastern Uttar Pradesh — Bahraich, Shravasti, Balrampur, Gorakhpur, Jaunpur and Azamgarh — are the most-affected.

The Chief Minister’s Office issued an order October 10 to expedite relief work. However, the water is so high that it is very difficult to survey fields. Avinash Pandey, a Lekhpal (revenue official) and resident of Bhinga in Shravasti said the loss of life and property due to floods was being looked into first.

Each of the three districts — Pratapgarh, Prayagraj and Santarvidasnagar — recorded 10,000 per cent more rainfall than normal October 9, according to IMD data. Some 580,000 people in 650 villages across 16 districts have been affected due to floods, according to the UP Relief Commissioner, Prabhu Narain Singh.