She died following complications from COVID-19 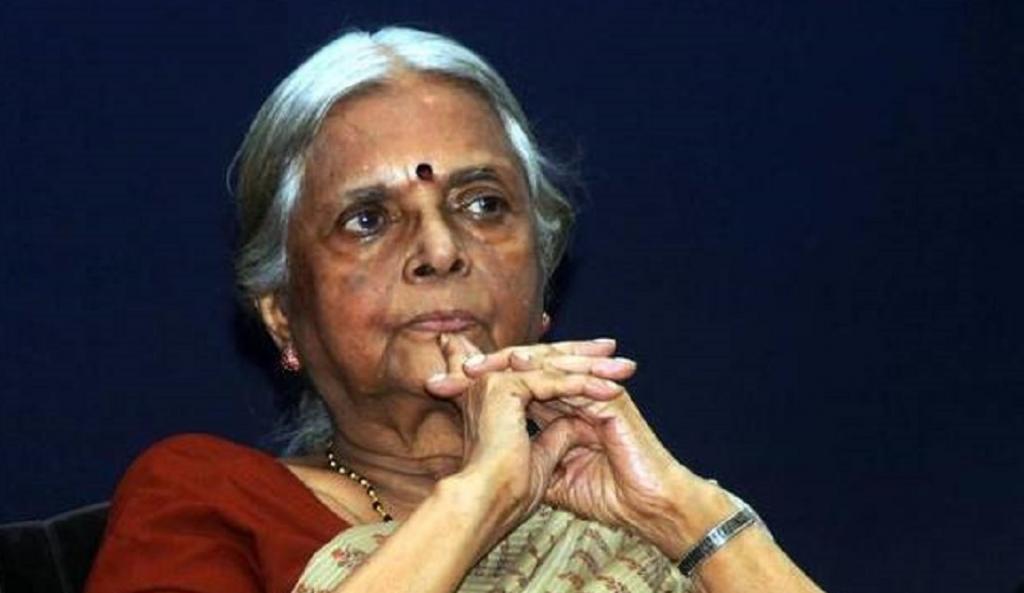 Malayalam poet, writer, literary critic and environmentalist Sugathakumari passed away December 23, 2020 in Thiruvananthapuram due to complications related to the novel coronavirus disease (COVID-19).

The poet breathed her last at 10.52 am at the government medical college in Kerala’s capital.

Born on January 22, 1934 in the town of Aranmula in Pathanamthitta district, Sugathakumari was the middle of the three daughters born to poet Bodheswaran and scholar VK Karthiyayini.

Her parents instilled the love of reading, writing and poetry in her from a young age. Sugathakumari was educated in Thiruvanathapuram.

For example, here is her work Thaivakkal, whose opening stanza talks about the pathetic condition of a polluted river.

We have taken this from the paper Exploring the anguish of the crippled green: An ecocritical reading of select poems by Sugathakumari by Archana B. It was published in the Journal of the Gujarat Research Society, Volume 10, Issue 10, November 2019

It has two parts; in the middle

On one side there is a city

Immersed in smoke and

And with oozing blood.

Another of her celebrated poems is Raathrimazha (Night Rain) for which she won the Kendriya Sahitya Akademi Award:

Pensive daughter of the dusky dark

Sugathakumari was also noted for her work with the mentally-ill. Moved by the sight of mentally ill inmates in Kerala’s government hospitals, she opened her home Abhaya in 1985.

Her interest in improving the living conditions of the mentally-ill was the reason behind the improvements in the state’s psychiatric hospital, according to the website of her organisation.

Today, Abhaya also caters to drug addicts, abandoned women and children in distress. Sugathakumari was married to K Velayudhan Nair. She is survived by her daughter Lakshmi Devi, who is also a poet.

A number of eminent persons tweeted tributes for her as news about her death spread December 23. These included former Union Minister for Environment, Jairam Ramesh:

My tribute to someone who influenced me hugely as Environment Minister, poet-activist Sugathakumari. pic.twitter.com/ZkRZqr6ruk

Sorry to hear of demise of Sugathakumari Teacher the revolutionary poet activist and #environmental leader of the Silent Valley movement in the 80s. Yesterday I visited Silent Valley and remembered her. Today she is no more. Rest in peace Teacher!!@ForestKerala @wti_org_india pic.twitter.com/3RLSI3x4GC