Damage to crops less as villages not heavily cultivated, according to preliminary estimates

In Rajasthan's Dholpur. Swarms of locusts descended on several districts of the western Indian state in the worst locust attack since 1993. Credit: Vikas Choudhary

When Neeraj Tyagi, a farmer in Dunkapur village in Rajasthan’s Dholpur district, sowed his brinjal crop about month-and-a-half ago, he thought of erratic rainfall as the only potential threat to the crop. Little did he know the village would be struck by a much bigger malaise — desert locust infestation.

Swarms of locusts descended on several districts of the western state in the worst locust attack since 1993.

The pests ate away the leaves of Tyagi’s first-ever brinjal crop. When Down to Earth reached out to him, he was trying to calculate his loss.

The situation was similar, if not worse, in the nearby Pachgaon village as on May 27, 2020. As Down to Earth was chatting with villagers there, a swarm — possibly comprising millions of locusts — appeared out of nowhere and took over the sky.

More villagers came out of their homes as the locusts first attacked the peepal trees in the area, eating off the leaves. Some farmers rushed to their fields, others started beating utensils to scare the pests away. Some took photographs. 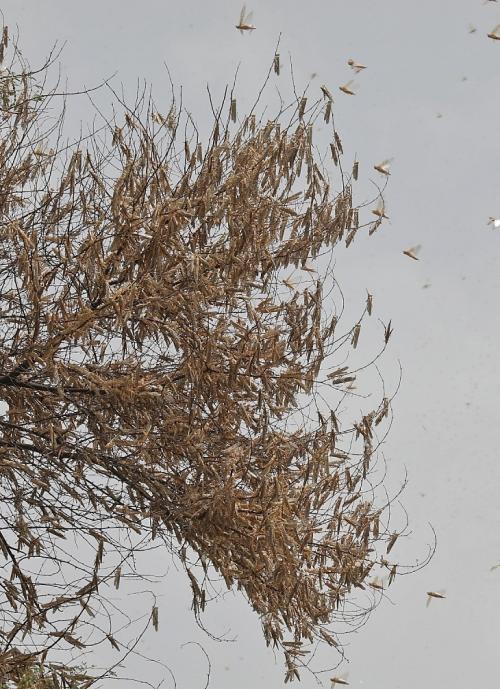 Locusts attacked the trees and ate off the leaves. Photo: Vikas Choudhary

Residents of Dholpur villages are new to the attack — they have never seen one before in their lifetime.

But farmers had a much bigger reason to worry. Ram Babu (68), a farm labourer, made loud noises for about an hour on his 1.4-acre land, hoping to scare off the locusts. The 46 degrees Celsius sweltering heat could not deter him.

Despite all his efforts, the pests ate off the pumpkin leaves, destroying at least one-fourth of the crop.

“I have never seen these pests in such large numbers before. The news talked about the attack in Jaipur, but I didn’t think my village could be under threat too,” Babu said.

The locust swarms have spread to areas previously untouched by pests in more than four decades. According to experts, winds are the major carrier of desert locusts India’s northwest and central regions.

Their early arrival and excessive rainfall has also contributed to them spreading far and wide.

When the swarm first entered Dholpur, district officials were at Saipau, the entry point to the district. Dayashankar Sharma, deputy director, agriculture, Dholpur was at the site since 8 am to keep a vigil.

“We have been on alert since last night and have been coordinating with different districts. Looking at the wind direction, we figured it would come our way. We alerted the villagers to bang utensils and make loud noises,” he said.

Why did the villagers not spray insecticides?

“We carried the insecticides along but it made more sense to spray when the pests settled for the night. We didn’t allow them to settle anywhere in Dholpur. Though some got left behind or separated from the swarm. Lizards and birds feed on them,” he said.

The team managed to reach Panchgaon after ensuring that Saipau was locust-free, But the swarm had moved to Dunkapur village by then. Only a small group was left back.

The loss across the district, however, was nominal, according to preliminary estimates. The villages were not heavily cultivated and there were only few vegetable and fodder crops. Damage to trees has to be assessed.

Meanwhile, in Agra, the district-level team was on alert till 12:30 pm for it appeared that the swarms could enter Jagner block through Dholpur’s Rajakhera. But the wind carried them across the border to Madhya Pradesh.